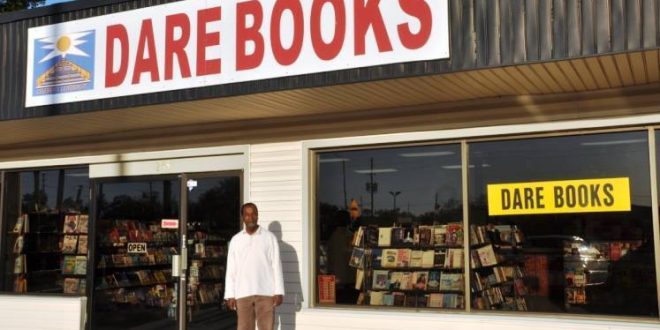 Desmond Reid stands in front of his Longwood bookstore, DARE Books, in 2014. The shop, specializing in multicultural literature, has experienced a large spike in sales since the death of George Floyd.

Desmond Reid entered the book business 38 years ago, hoping to educate the masses. At times, he said, it’s been discouraging. Today though, he feels hopeful.

Reid is the owner of the multicultural-centered bookstore DARE Books in Longwood, Fla. Reid founded the store in Brooklyn, N.Y., moving it south ten years ago in a step toward retirement.

“When I started this business in ‘82, there was a great consciousness and that consciousness was lost because people took things for granted,” Reid said. “They didn’t think what happened in the ‘60s would happen again because of all the ‘progress’ we made, but the monster reared his head again.”

Since the wake of protests spurred by the death of George Floyd on May 25, DARE Books has received at least 10 times the volume of orders it usually does this time of year. Reid said countless anti-racism and Black history titles are on backorder as publishers respond to an increased demand.

“Before this, I had ‘The New Jim Crow,’” said Reid, referencing the 2010 book by Michelle Alexander. “I had 100 copies and they’re all sold out — that’s the most popular one.”

Reid also said many of the often requested titles have been out of print for years, further complicating the market.

DARE Books isn’t the only place seeing an increased interest in books on anti-racism though — numbers from bookstores and libraries throughout the state reflect the trend.

The Alachua County Library District closed its branches in March due to the coronavirus pandemic, but continued e-book lending and began offering curbside pickup in the beginning of June.

“Our books on anti-racism, racism, and race relations are checking out at a higher rate,” said Rachel Cook, public relations and marketing manager for the Alachua County Library District.

According to Cook, circulations of print adult books on these topics have increased by 49% during May through July compared to the same timeframe in 2019. Checkouts of children’s print books on racism and race relations have jumped 103%.

Statistics for their digital titles on the specific topics of anti-racism, racism and race relations are harder to obtain — e-books are lent through the third-party vendor OverDrive — but Cook said checkouts of African American nonfiction titles from OverDrive have increased 180% compared to May-June 2019.

“Anecdotally we know that demand for digital books related to Black Lives Matter has also increased,” Cook said. “The interest in books by Black authors mirrors the national discussion and events surrounding race and anti-racism.”

The week of June 21, Amazon’s top 20 bestsellers list was dominated by 13 titles addressing race and social justice — only one of which was released in 2020. The online retail giant even temporarily ran out of stock on at least six of those books.

However, many Black Lives Matter activists urged people on social media to direct their shopping toward independent bookstores.

Heather Halak, who identifies as Latinx, owns the Gainesville shop Third House Books. The store has seen triple the amount of sales it normally would during this period.

Halak said she’s glad to see so many people deciding to educate themselves on America’s history with race, but she hopes people aren’t just picking up the first book they see.

“They need to be reading books by Black folks,” Halak said. “Paying them for their work by buying their book, but also giving their words the necessary attention and time, is vital.”

Halak encourages her clients to instead shop at one of these five Black-owned independent bookstores in Florida.

In 2014, only 54 Black-owned bookstores were left in the United States, making them few and far between. As a result, owners like Desmond Reid are struggling to handle the demand.

“I’m not complaining though,” Reid said. “There’s a new consciousness, which is a good thing.”

Previous Cattle Prices Mooving Up Slowly During COVID-19 Economic Turndown
Next ‘Everyone Should Show Respect To One Another’: Controversy Swirls Around Ted Yoho’s Confrontation With Alexandria Ocasio-Cortez