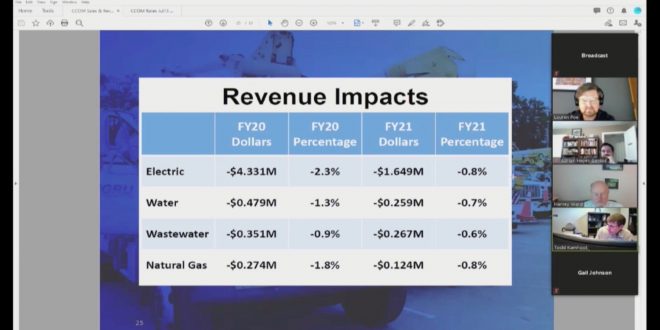 In a virtual meeting on Monday, city commissioners decided to forego utility rate increases in Gainesville for the upcoming fiscal year. (Photo: Screenshot of virtual meeting)

Gainesville City Commissioners on Monday nearly unanimously agreed to keep city utility rates where they are for another year.

The decision followed a recommendation from both Gainesville Regional Utilities management and Utility Advisory Board members to choose a zero-base rate increase for the next fiscal year, which begins Oct. 1.

There was, however, a discussion around a 1.84% increase for water and wastewater connection charges.

“The only thing that would increase is a small connection charge, that based on the inflation index, automatically goes up, and that will be reflected in connections,” he said, “but aside from that, this is a zero increase.”

Commissioner Reina Saco wanted confirmation from Bielarski that the connection fee would not affect existing customers.

Bielarski responded,“This would be in a situation where a new home is being built, and you’re getting a new connection for service.”

“Typically, we try to set rates and keep them exactly there for a year,” he said. “But we do have the ability to make a mid-year adjustment, and we’ve done that in the past.”

A mid-year adjustment could become necessary if economic conditions again shift as a result of the COVID-19 pandemic.

“I’m going to support the motion and move forward with the staff recommendation with the information we have right now,” Poe said, “If different numbers start coming in once we get into the fiscal year, then we’ll just have to come back around and revisit and potentially make a mid-year correction.”

Last year, the commission approved a decision to increase electric rates by 6.4 percent starting in October. The pandemic changed that.

“So many people are just unable to work because there are simply not enough jobs,” Commissioner David Arreola said. “So, I think for this year, the zero percent general manager recommendation is what we need to pursue.”

The motion to freeze city utility rates passed 6-1, with only Commissioner Adrian Hayes-Santos voting in dissent.

“I’m not supportive of the current budget, and the main reason is, I don’t think we are projecting our revenues correctly and realistically,” Hayes-Santos said. “(Florida) hit the most COVID cases of any state yesterday, so I think we need to be more cautious in our revenue projections.”

His cautious sentiment did gain the support of at least one colleague.

“I’m tending to agree with Commissioner Hayes-Santos,” Commissioner Gail Johnson said. “My sense is that we’re going to have to re-evaluate this once again in a few months, once we realize that there’s even more of a revenue shortfall (than) $7.7 million.

“I don’t want to set any false expectations,” she said.

Caitlyn is a reporter for WUFT News who can be reached by calling 352-392-6397 or emailing news@wuft.org.
Previous Emerging Twitter Account Unveils Sexual Harassment Reports Of UF Students
Next Kanye West Fails To Make Presidential Ballot In Florida Amid Reports He’s Ending His Brief Political Campaign