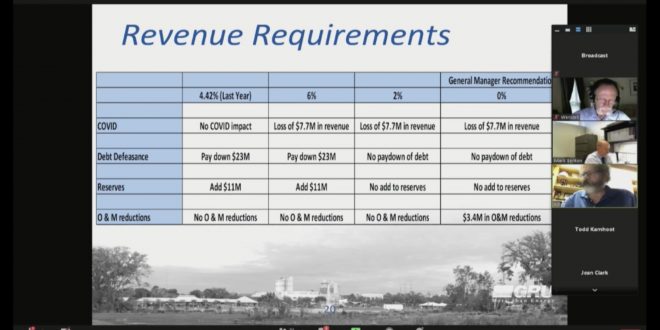 From projections of a 6% increase to holding the status quo: Gainesville Regional Utilities management now says it doesn’t need a rate increase for the next fiscal year.

The city of Gainesville hosted a virtual meeting Thursday of the Utility Advisory Board to hear from GRU staff about its fuel baseline budget and other information to be proposed to the upcoming fiscal year 2021 budget, which starts Oct. 1.

Following a 4.42% increase last year, the board originally heard projections of a 6% electric rate increase for 2021.

But that was before the economic impacts of COVID-19 appeared.

“We looked at what we could do to lower that rate, given the fact that there’s many people in our community suffering from the impacts of the pandemic on loss of jobs, loss of income, loss of the ability to have childcare for their families,” he said.

Bielarski said the utility’s budget can absorb $3.4 million in operations and maintenance cuts to accommodate the rates staying where they are for now.

“We’re taking a bunch of expenses that include travel and training, and we’re going down to the bare bones minimum,” he said, but did caution it’s going to be tough on GRU’s finances, adding that the lack of a rate increase is “not something that we can afford to do at this point.”

Not raising rates also means the utility this year would not be able to pay down any debt or add to its reserves. It’s also likely to take a revenue loss of $7.7 million.

GRU annually transfers more than $30 million in revenue to the City of Gainesville’s general government budget to help fund expenses like police, fire safety, bus service and city parks. The utility leadership and city commissioners have, in past years, worked to agree on a fund transfer amount that would keep GRU rates from rising too quickly while continuing to fund city services.

The Gainesville City Commission will still need to agree to keeping the rates where they are for the coming year, but its appointed Utility Advisory Board voted in favor of that action on Thursday. Chairman Wendell Porter motioned for a 1.84% increase in water/wastewater connection charges to account for inflation, to which the board agreed.

City commissioners will meet Monday to discuss and likely vote on the recommendation.

Daniel is a reporter for WUFT News who can be reached by calling 352-392-6397 or emailing news@wuft.org.
Previous The Point, July 10, 2020: Coronavirus Case Spike Brings Early End To One Summer Camp In Gainesville
Next Coronavirus Case Counts Surge At Alachua County Jail