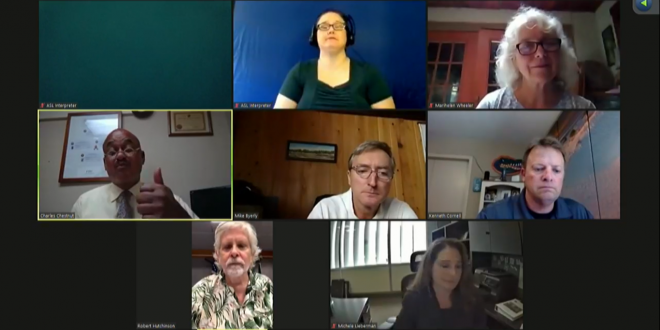 The Alachua County Board of County Commissioners met via zoom for its special meeting Tuesday, July 7, 2020.

Alachua County will disburse $46.9 million in CARES Act funds for COVID-19 relief, and according to a new budget plan, property taxes in the county could soon be lowered, too.

During a board of county commissioners special meeting Tuesday, Alachua County Manager Michele Lieberman unveiled disbursement plans for the county’s COVID-19 relief funds and a tentative budget plan for the fiscal year 2021, which starts Oct. 1.

The $46.9 million in relief funds comes from the federal government’s CARES Act, but Alachua County will receive the funds in quarters, starting with $11.7 million to be used for the next six months.

According to Lieberman, these initial funds must be spent before the county can receive the next set of funds.

The vast majority of the funding — $36.1 million — will be reserved for relief grants to individuals and businesses. 20% of this will be available during the first round of the county’s CARES Act funding.

“This is the overwhelming funding, going into this category,” said Lieberman. “This is the category that really belongs to the citizens.”

Commissioners decided individuals will be able to apply for up to $5,000 (per household), a jump up from the plan’s initial proposal of $2,500. However, only the first $2,500 will be guaranteed; the remaining aid that people apply for will be disbursed as it becomes available as funds are reevaluated and reallocated.

Commissioner Mike Byerly spurred the efforts to bump up the dollar limit for which people could apply.

“The most reliable way I think we have to get the money to the people who are in the greatest need is not via the filter of a business — it’s through an individual’s ability to demonstrate, ‘I haven’t been able to pay my rent in three months, because I lost my job on March 17,’” he said.

Eligibility is reserved for residents who were furloughed or laid off, or those who need help making rent, utilities, internet, phone, or car payments from March 1 until now.

Or, businesses of 50 employees or less can receive up to $10,000 through a back-to-work grant with documented efforts to reemploy furloughed or laid-off workers.

The relief plan’s remaining money will be allocated to things like medical expenses, public health expenses, and actions to facilitate compliance with COVID-19-related measures.

Medical expenses will receive $2 million initially, with $1.25 million reserved for the Alachua County Department of Health’s contact tracing specialists, epidemiologists and other medical staff. The other $750,000 will be allocated to things like expansion of testing sites and emergency transport costs.

Public health expenses include an initial $2 million in funding for purchasing protective equipment for health workers and disinfecting public facilities (including nursing homes).

A little over $3 million will be used for facilitating compliance with county health measures. This includes $800,000 for sanitation and health improvements in the county jail, $500,000 for staff to enforce public ordinances, $500,000 for the homeless population’s housing and medical needs and $500,000 for food delivery programs.

According to Lieberman, the funds will be shifted and reallocated to different programs and municipalities depending on need.

“It’s the constant reevaluation of the criteria that we’re using to make sure that we get it to as many people as possible in the time that’s allotted,” she said.

Lieberman also unveiled the county’s tentative budget plan for the fiscal year 2021, which was significantly influenced by the economic fallout of COVID-19.

In response to the economic downturn, she recommended “roll back rates” for the county’s general tax fund and the Municipal Services Taxing Unit’s law enforcement fund. This roll back would include millage reductions, or reductions in property tax rates.

A mill is $1 out of every $1,000 of a property’s taxable value, and in Lieberman’s recommendation, the county would collect fewer mills for the two funds mentioned.

For the county’s general fund, which provides resources for most county departments and constitutional offices, the millage rate would be reduced from 8.2729 mills — about $8.28 collected by the county for every $1,000 that a property is a worth — to 7.8961 mills, or about $7.90 collected.

This would ultimately result in a difference of about $2,072,541 for this particular fund in comparison to its projected revenue from fiscal year 2020. According to the budget document, this would be only the “third time in the last 40 years that the millage rate dipped under eight mills.”

For the law enforcement fund, the millage rate would reduce from 3.7240 mills to 3.5678 mills. This would ultimately result in a difference of $504,226 in comparison to the fund’s projected revenue for this fiscal year.

However, these rates are merely the county manager’s recommendation; the county commission is tasked with setting the tentative millage rates during its July 14 meeting.

Other initiatives in the budget plan included raising the minimum wage for county workers from $14 to $14.50 an hour, continued construction of a county agricultural and equestrian center and development of new county infrastructure, such as an “administration building to consolidate much of the county’s downtown operations in a single location.”

The fiscal year 2021 budget plan will be publicly discussed and amended by the board of county commissioners for the next two months, culminating in its adoption on Sept. 22.

Thomas is a reporter for WUFT News who can be reached by calling 352-392-6397 or emailing news@wuft.org.
Previous The Point, July 7, 2020: As Cases Spike, Florida Schools Are Mandated To Reopen In Person By August
Next The Point, July 8, 2020: First Alachua County Budget Proposal Of The COVID-19 Era Emerges