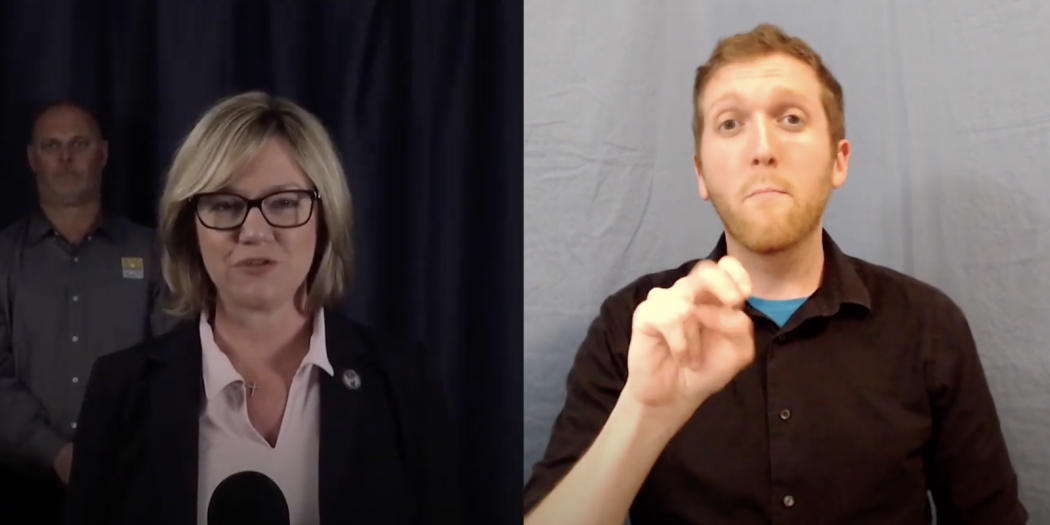 Licensed Interpreter David Phillips volunteered to sign a March 31 update from Marion County after noticing it did not have an interpreter. County Commission Chairwoman Kathy Bryant speaks at left.

Getting news when it’s relevant is a luxury.

For the past three months, local governments in Florida have provided updates about the coronavirus pandemic, hurricane season and the Black Lives Matter movement. Many who are hard of hearing or deaf have received this information days after it was first announced.

When Florida first began responding to the coronavirus in March, Alachua and Marion counties gave updates without an interpreter or closed captioning. As of Friday, Marion County had not regularly provided interpreters for their updates. Many in the hard of hearing and deaf community say these sort of access issues are a recurring problem.

North Central Florida Signing Alliance, a nonprofit in Gainesville that advocates for the deaf and hard of hearing, sent an advocacy letter to Alachua County and the City of Gainesville on March 16. This letter requested that both closed captioning and an interpreter be provided in American Sign Language.

NCFSA referenced Section 504 of the Rehabilitation Act and Title II of the Americans with Disabilities Act, which require equal access to information for those with disabilities, including providing interpreters and captioning for updates and briefings.

Along with voicing their concern for equal access, Rosemarie Stachowiak, NCFSA president, provided resources to find an interpreter.

After Alachua County and the City of Gainesville received the letter, they began providing an interpreter and captions. Marion County, however, did not continue the use of an interpreter after the March 16 meeting.

Deaf individuals who lived in Marion County reached out to NCFSA, who responded by sending another advocacy letter to officials on April 2.

“…a planned, scripted, and professionally produced communication is clearly planned well-enough in advance that an interpreter could be provided as opposed to a truly emergent response,” Stachowiak wrote. “Given that captions were provided but an interpreter was not, we assume that Marion County did not contact the interpreter agencies or private practice interpreters…”

But after the second advocacy letter was sent, Marion County used only closed captions.

David Phillips, a licensed interpreter, noted the Marion County update on March 31 lacked an interpreter and volunteered to sign the video.

Brandon Kalloo, public information officer for Marion County, said scheduling conflicts have caused the lack of interpreters, and added in an email on Monday that the county is working to prevent that from recurring by expanding their list of certified sign language interpreters so someone is always available. They have also, he said, “identified an employee interested in filling in for emergency video updates when local contractors are unavailable or unresponsive.”

Lynn Rousseau, the president of the Hearing Loss Association of Gainesville, also said interpreters are essential to the deaf community. Rousseau, being deaf herself, understands the struggle of acquiring information after it is needed.

“Not hearing or understanding leads to isolation and depression, and can be dangerous in the event of an emergency,” Rousseau said. “It’s difficult to rely on the next person near you to provide information.”

University of Florida professor Stephen Hardy is also a part of the deaf and hard of hearing community and voiced that equal access to information is something that communities with disability struggle with time and time again.

“We need to educate our local, state and federal governments to start providing communication access to ensure that everyone is informed,” Hardy said. “I would encourage their government to set up a plan for all kinds of disasters and create a list of people who will be involved to provide assistance to the disabled community.”

Melody is a reporter for WUFT News who can be reached by calling 352-392-6397 or emailing news@wuft.org.
Previous New Florida Law To Bring More Electric Charging Stations To State Highways
Next Black Lives Matter Marchers Gather In Newberry