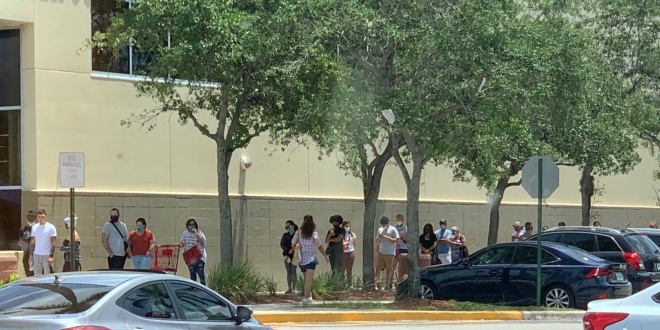 Customers on Saturday lined up outside a Trader Joe’s in Broward County. Although encouraged to stand six feet apart, some groups did not. (Ana Escalante/WUFT News)

‘A Lot of People Are Frustrated’: Grocery Store Workers Push for Emergency Status

The United Food and Commercial Workers International Union, which represents 1.3 million food and retail workers, contends that at least 72 U.S. food industry workers have died due to COVID-19 and nearly 3,000 grocery store employees have shown symptoms of the coronavirus.

That has prompted the union to call on federal and state governments to mandate “extended first responder” or “emergency personnel” status for those employees.

The always essential but traditionally undervalued group has become esteemed like never before in recent months. And with Florida and other states reopening their economies, advocates say granting emergency worker status would make it so they have better protective equipment.

“It is absolutely critical that the CDC do more to help protect frontline workers who are at daily risk of becoming infected and even dying from the coronavirus,” the union said in a statement calling for amendments to guidelines from the Centers for Disease Control and Prevention.

The Florida Health Department doesn’t list or confirm retail locations that have had outbreaks, according to the Tampa Bay Times, making it impossible to know how widespread the issue is in the state, unless employees make their stories known themselves. Additionally, the state government made Florida medical examiners stop releasing COVID-19 death data.

“We do believe that we are like our first responders and nurses,” she said. “Kudos to them for their hard work and dedication, but we, too, are at the forefront of this pandemic, assisting our customers in need of supplies and food.”

“A lot of employees do not feel comfortable coming into work,” Medina said. “They’re fearful, and it’s understandable, and I think as employers and organizations we need to pay attention to that genuine fear, recognize it and provide them the tools.”

A representative of Florida’s COVID-19 information center wrote in an email that Gov. Ron DeSantis’ task force is considering these employees as the state seeks to reopen its economy.

“Many grocers across the state and nation have implemented safety measures to protect their employees and the public,” the email statement read.

However, not all members of the food industry nationwide are being considered. The Trump administration is aiming to reduce wages of farmworkers, as reported by the Wall Street Journal.

Lupe Gonzalo is a staff member of the Coalition of Immokalee Workers, an organization based in Collier County which advocates for farmworkers and ending human trafficking and gender-based violence at work. Gonzalo said the CDC has not categorized them as at risk, despite their being a traditionally disadvantaged group that faces further dangers because of COVID-19.

“We have seen that farmworkers are the workers who are part of the critical labor force that creates the foundation of the world’s food system,” Gonzalo said. “But they are also one of the most vulnerable and poor communities in the country.”

Social distancing and isolation are not possible for farmworkers, she said. They typically have no means of transportation and must travel to the fields on buses with 40-50 passengers or vans with 10-12 people. They also live in homes with 10-12 workers. Farm owners are providing extra buses, areas for hand washing and increasing cleaning, Gonzalo said.

The closest hospital is an hour away, however, so the coalition is asking the government to place temporary hospitals and isolation spaces in Immokalee and provide protective resources.

“We are asking the governor to respond to this urgent emergency,” she said. “If agricultural workers stop working, nobody will have food on their table.”

The Miami Herald has reported that the Publix supermarket chain had reversed course and agreed to urge or require its employees to wear facial coverings, while the Tampa Bay Times told that the grocery store chain was behind others in its safety policies.

Publix is giving its employees the option to wear masks and gloves unless an ordinance requires otherwise, Nicole Krauss, a media relations manager, wrote in an email to WUFT News.

A Publix employee in Alachua County began making her own masks when the pandemic started. The worker, who requested anonymity for fear of losing her job, said her store initially provided disposable masks and said to sanitize them before and after shifts. She’s sold about 100 masks to supplement her income; her hours were cut after the first two weeks of COVID-19 shutdowns.

“They weren’t helping out in the financial situation that everyone is in,” she said.

The employee said customers take out their anger on her about such company policies as limits on merchandise, not realizing that she’s on the frontlines doing thankless work, she said.

“I hope the government does step in and try to help out some of us …” she said. “We’re out there busting our butts trying to make sure that people are happy and people are taken care of.”

Grocery delivery services have become the norm for many households during the pandemic.

A 36-year-old Instacart employee in Miami, who also requested anonymity, said his job has given him a few gloves and wipes, but no mask, even though he must work in tight spaces. Since the outbreak, his pay was cut from $20 to $12 hourly and bonuses were taken away, he said.

As for any help so far from the government, he said, “It’s totally inadequate for the amount of work that we are doing and the amount of danger we are facing.”

Some grocery workers feel comfortable with how their stores are handling the situation, but they still support the movement for emergency status.

Amelia Rey’s son Antonio Rey, 19, has autism and has been working at a Trader Joe’s store in Miami since August. Despite initial concerns when COVID-19 escalated, he continued working there because it’s a necessary part of his routine. Both mother and son are comfortable with the cleanliness of his Miami store and its policies, including wellness checks and bonuses, she said.

“He loves the place,” Amelia Rey said. “They are extremely accommodating because of his disability, but they do expect him to perform his job duties.”

April is a reporter for WUFT News who can be reached by calling 352-392-6397 or emailing news@wuft.org.
Previous The Point, May 6, 2020: DeSantis Criticizes Florida’s Unemployment System
Next Florida Supreme Court Conducts Historic Oral Arguments Using Video Screens