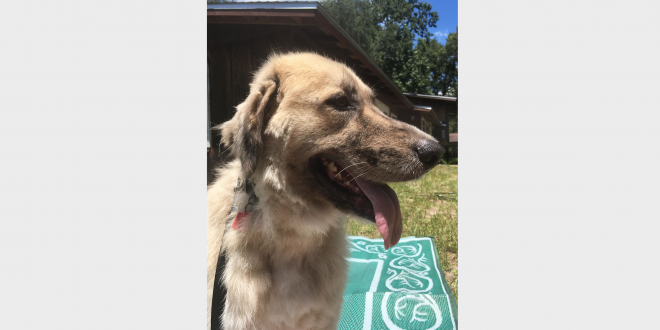 Cristiana Jones' dog, Sammy, a Great Pyrenees, is at risk for diseases and discomfort if she is not shaved properly throughout the hot, summer months. To Jones, it's logical that pet groomers open for the safety of animals everywhere. (Photo courtesy of Cristiana Jones)

When Steffanie Henderson saw on social media over the weekend that a dog could get a haircut in Alachua County but she couldn’t, she was livid.

“My first thought was, ‘Dogs have a higher priority than people,’” Henderson, 36, of Chiefland, Levy County, said Sunday. “Wonderful.”

Alachua County announced Saturday via Facebook that it was amending its weekslong coronavirus emergency order so that animal grooming services were “now considered low-risk and can resume Monday.”

On Saturday, DeSantis met with hair stylists, nail technicians and barbers in Orange County to get feedback on how personal grooming services can reintegrated into the economy.

A good haircut can improve one’s mental health, which would be critical during a once-a-century pandemic, Henderson said. She has managed three Great Clips stores in Alachua County for the past two years and remains furloughed while they are closed.

Dana Stahlheber, 42, of Gainesville, owns Doggie Styles Grooming and Pet Sitting, a mobile pet salon operating out of a van. Since the county issued its shelter-in-place order on March 23, she has followed a no-contact rule­: animals are left at the van’s doorstep in kennels and returned to pet owner’s porch. Stahlheber wipes everything with bleach and wears a mask­ while grooming.

She said grooming is essential for an animal’s health. Thinning hair, discolored skin and limb tenderness, among other things, can signal underlying health issues that can otherwise go undetected and worsen in between a pet’s yearly visit to the veterinarian.

“When I was grooming a dog, he had pain in his back leg,” Stahlheber said. “I thought it was arthritis and told his owner to take him to the vet. It turned out to be bone cancer­­. They only had to amputate his back leg and not euthanize the dog. We caught it right away.”

Yes, all humans are desperate for a haircut these days, “but really, for the animals, who can’t do without it, it becomes critical for them,” she said.

Jones also noted that she took Sammy to the vet last week, she said, doctors came to her car with gloves and masks to collect her while Jones paid the bill over the phone.

When humans can get a haircut again in Florida remains unknown.

Hair stylists can’t do home visits either, unlike some medical professionals. According to Florida’s Department of Business & Professional Regulation statutes, if stylists do services in non-licensed salons, they’re at risk for being fined or even losing their license.

That’s a risk Kim Schleissing, 50, a stylist in Gainesville for over 20 years, is not willing to take.

Schleissing said she and other stylists in the area began feeling the business impact of the coronavirus in mid-February, as older clients began to reschedule out of fear.

Some clients who have had to cancel have offered to pay her in advance, or have donated the price of a lost haircut through Venmo, but Schleissing is telling them to keep their money.

“When I get back to work, and I’m working 24/7, I’m going to need the money just as much as I did now – and I’d rather be working my butt off for money than for nothing,” she said.

For sure, the stress of supporting her family weighs on Schleissing’s shoulders every day. She’s gone from making $6,000 a month to nearly wiping her savings for groceries and bills. She’s also no longer putting any money into her retirement fund in order to afford the necessities.

Schleissing hasn’t been able to get any Florida unemployment benefits as an independent contractor, as the website keeps crashing and malfunctioning. She has also been denied a small business loan – without being given a reason, she emphasized – after applying twice.

“I’ve given up, because it’s so much time and so much effort, and I feel like it’s just not gonna happen, and I’m just praying that we open soon,” she said.

For the time being, hair stylists, barbers and nail technicians simply have to wait on DeSantis’ word. However, they all know that when they open up, things won’t be the same.

Take sanitation, for example, said hair stylist Meleah Baker, who said she believes things like seeing two clients at once and not wearing gloves or a mask will be a thing of the past.

While her space at a salon in Gainesville is closed, Baker, 26, has sold hair care products out of her car. She doesn’t qualify for a small business loan, but has applied for cosmetology grants.

“Anything is better than nothing,” she said.

More than 50% of Baker’s clientele are University of Florida students. She doesn’t know when she’ll see them again­­, as UF students may not learn when they can return to campus until July.

“I think it’s just about staying hopeful and weathering through this moment,” Baker said. “I think we’ll all be able to move past this, eventually, and be in a better place.”

Ana is a reporter for WUFT News who can be reached by calling 352-392-6397 or emailing news@wuft.org.
Previous The Point, May 4, 2020: A WUFT Investigation Into Climate Change And Public Health
Next Questions And Answers: Florida’s Voting Rights Lawsuit Could Tilt 2020 Presidential Race