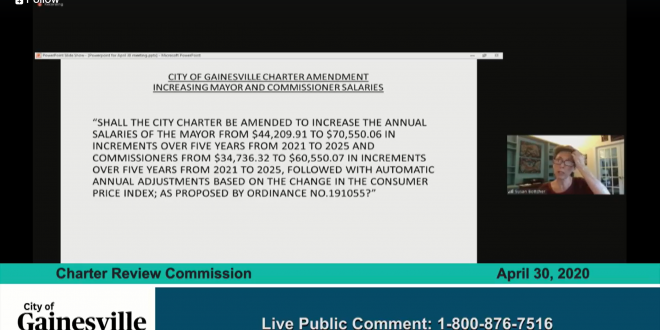 Charter Review Commission member Susan Bottcher talks about an amendment that would have increased the Gainesville mayor and city commissioner salaries.

May 1, 2020 Coronavirus, Government and politics

The Gainesville Charter Review Commission on Thursday voted against a proposal that would have had voters decide whether to increase the salaries of the mayor and city commissioners.

The 11-member review panel voted 6-4 to not put such a charter amendment on the ballot in November. Dissenters argued that a pay raise for city leaders did not seem right when municipal workers and residents could still be struggling because of the coronavirus pandemic.

“For me, it’s a hard pill to swallow,” Chairwoman Mary Lou Hildreth said of the proposal during the panel’s third virtual meeting held this month.

“It’s so ironic that the city commission is giving living wage to all city employees other than themselves,” Cohen said.

The review commission was formed in May 2019 after Gainesville voters overwhelmingly opted in 2018 to creating an independent panel – once every decade – to consider charter amendments. The city’s charter serves as a governing document, much like a constitution, for the municipality.

Just one member of the public weighed in during the meeting.

Armando Grundy-Gomes made clear his disagreement with the proposed salary increase, saying “it comes from an elitist place” and that “it does not belong in the charter, period.”

Sarah is a reporter for WUFT News who can be reached by calling 352-392-6397 or emailing news@wuft.org.
Previous Researchers Look Into The Role Children Play In Community Transmission Of COVID-19
Next When A Homeless Encampment Is Shut Down, One Woman Fights To Find Home