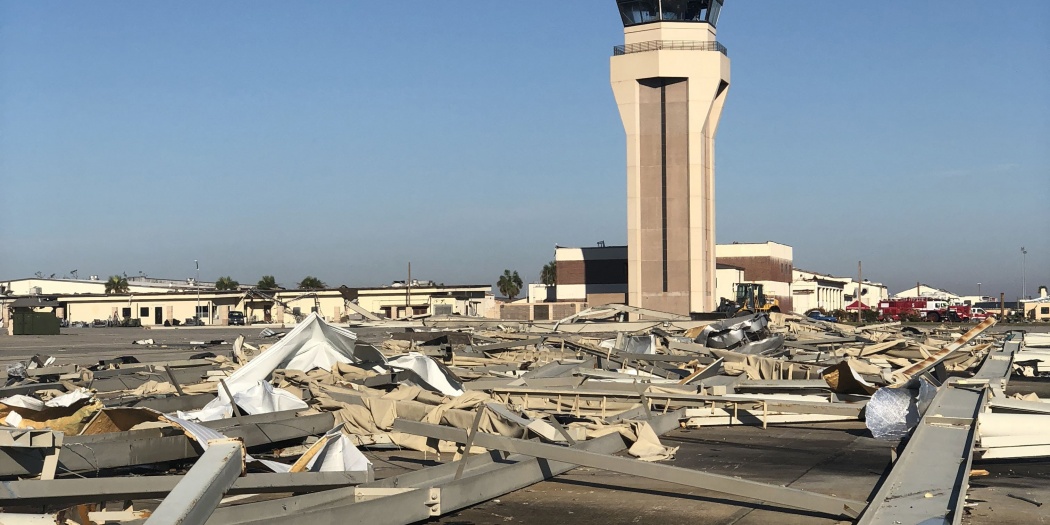 Hangars once used to keep aircraft out of the elements lie scattered across the Tyndall Air Force Base flightline on October 10, 2018, after Hurricane Michael. (U.S. Department of Defense/Fresh Take Florida)

The military is poised to indict an Air Force staff sergeant on criminal charges of stealing more than $30,000 worth of government property from hurricane-damaged Tyndall Air Force Base east of Panama City, according to federal court records and interviews.

The investigation so far has spanned at least two states: Agents raided his home after surveillance video showed a pickup belonging to the man’s father leaving the base loaded with stolen items, then last month agents searched his father’s home in Tennessee, according to court records.

The Air Force was preparing to indict Staff Sgt. Dairian D. James of Panama City last month but the legal proceedings were delayed due to the pandemic, Linda J. Card said in an email. Card is spokeswoman for the Air Force Office of Special Investigations at its headquarters offices in Quantico, Va. Card said James’ indictment could be delayed weeks longer.

An Air Force investigator, Kevin Sucher, said in court papers the investigation began in February after about $40,000 in government industrial cabinets were reported missing from a building on the fighter jet base that had been heavily damaged by Hurricane Michael in October 2018.

Sucher said in court papers that investigators tried to question James about the thefts, but James requested a lawyer and did not discuss the matter. James’ first name was spelled Dairian in property records in Bay County, Florida, and on his Facebook account, but Sucher spelled it Darian in his search warrant affidavit.

Copies of the search warrant applications in Florida and Tennessee and related legal paperwork were obtained by Fresh Take Florida, a news service operated by University of Florida College of Journalism and Communications. Prosecutors filed them in federal courts under case numbers and names with no obvious references to the James family.

James did not return messages by phone, text, email and to his social media account, or messages left with his wife, Kaitlin.

His father, Steffron James, 57, of Murfreesboro, Tennessee, declined to talk about the allegations and said he would pass a message to his attorney.

Steffron James, a veteran, told military investigators that he and his son took the property Jan. 25 from the base and believed the Air Force no longer wanted it. “They thought it was garbage and not worth anything,” Sucher said in court papers. Steffron was visiting his son at the time.

It was not immediately clear whether the James family was accused of stealing all the $40,000 worth of missing industrial cabinets in addition to the $30,000 in property the Air Force has already recovered in the case.

Federal agents obtained a search warrant last month from U.S. Magistrate Judge Alistair Newbern in Tennessee to search the home of Steffron James, according to court records there.

As a service member, Dairian James could face criminal charges under the Uniform Code of Military Justice, which governs military courts-martial and provides for punishments that can include discharge from the service and military prison sentences.

Steffron James offered to return the items, according to investigators. Surveillance video showed Steffron James driving his Toyota pickup off the base with a trailer loaded with items and his son in the passenger seat, court records said.

“Many of the stolen items were not marked with any specific markings that would denote it was property of the Air Force,” Sucher wrote in his application for the search warrant.

Dana is a reporter for WUFT News who can be reached by calling 352-392-6397 or emailing news@wuft.org.
Previous ‘A Great Thing For The Community’: Acts of Kindness Spread Across Area During COVID-19
Next Coronavirus Evening Update: Florida Hospitals to Resume Elective Surgeries