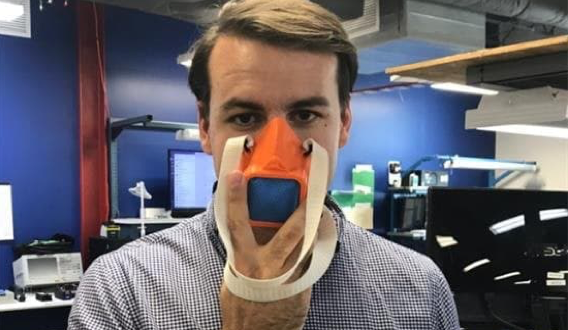 A Gainesville-based engineering firm, Altavian, is combating the shortage of personal protection gear for health care workers by mass producing masks with a material commonly found in hospitals.

Travis Whitley, a mechanical engineer, came up with a design for a reusable N95 grade mask made out of Halyard H600 – a material that abounds in hospitals and medical offices. It can be 3D-printed or injection-molded for fast mass production.

Halyard H600 is two-ply spun polypropylene that, according to the UF Health department of anesthesiology, is superior to the common surgical mask in its ability to block aerosols and droplets, including water, bacteria and other particles.

The material is typically used as wrapping for surgical instrument trays passing through gas sterilization or an autoclave; the masks can withstand the same sanitization process to be re-used.

Whitely’s new mask is a response to a national shortage of personal protective gear, PPE, for hospital workers who are treating COVID-19.

“For me, the possibility of a healthcare provider going without PPE is personal because my wife is a physician’s assistant,” Whitley said. “In doing this project, I sincerely hope that anyone who is short, or worried about being short on their PPE will have an option to attain a mask.

He brought his idea to his employer, Altavian.

By March 24, they had printed the first prototype of the mask – a design based off Billings Clinic 3D printed mask mode., he said.

Whitley said that the first design was focused on enlarging the air intake of the mask and the second version was focused on optimizing the design for injection molding over 3D printing to meet the increased demand.

“The original Billings Clinic model was hard to breathe through, especially with the Halyard H600 material, which dictated that the opening needed to be enlarged for more surface area, and thus greater breathability,” he said. “In addition, at the time that model didn’t have a proper gasket to comfortably seal the mask to the face, so we added one.”

The next focus became optimizing the design for injection molding because that process allows for printing in higher magnitudes than 3D printing methodologies.

Through the nonprofit’s website, Perry said, people are able to donate to the production costs and medical workers can order their masks.

American Mask Rally received a matching grant from the Adventus Foundation for $50,000, he said.

The full $50,000 needs to be matched for American Mask Rally to receive the donation.

“Using the money donated to date, we will be able to produce 1,000 a day which is quite a jump from the 493 we were able to ship out last week,” Whitley said.

American Mask Rally will continue to produce the masks until the shortage is over and will donate any remaining materials or donations to American Red Cross.

“I am extremely proud of the team rallying together in this tough economic time to produce this life saving PPE for the medical workers,” Whitley said. “I was amazed with how fast we were able to rally together from seeing a need to mass producing these masks.”

You can donate at https://www.maskrally.org.

Nicole Bowen is a reporter for WUFT News who can be reached by calling 352-392-6397 or emailing news@wuft.org.
Previous Cade Museum Helps Out With Lessons During COVID-19 Pandemic
Next Alachua County Charter Review Commission Continues to Review Voter Proposals

Dairy and beef cattle farms produce about 2% of total worldwide greenhouse gas emissions. According to Climate Watch Data, in 2018, 2% accounted for 1 billion tons of greenhouse gas. Alliance uses a system called an anaerobic digester to process their manure. From the outside, it just looks like a large concrete platform covered in metal pipes.