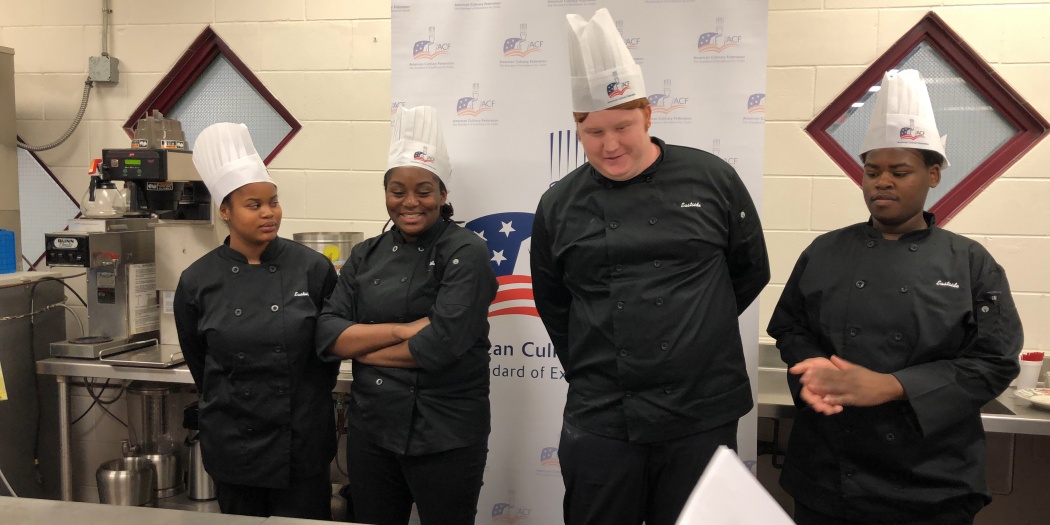 A team of culinary students from Eastside High School in Gainesville qualified to compete in a national competition in which the first-place team get to feed the astronauts in space.

Three seniors – Connor Mayer and George Smith, both 18, and Alani Cromwell, 17 – and a junior, Cirius Brown, 16, learned from NASA HUNCH’s project manager Alli Westover that they were chosen from 36 teams to compete next week against culinary teams from nine other high schools at NASA’s Johnson Space Center Food Lab in Houston.

NASA will process the food – either by freeze-drying it or by thermostabilization so that it won’t spoil – from the winning team and send it to the International Space Station, orbiting 248 miles above Earth, for the astronauts to eat.

However, there are nearly 1,400 confirmed cases of coronavirus in Houston as of Wednesday, and 400,000 cases nationwide. The NASA HUNCH Culinary Challenge was postponed on March 16, the same day workers at the space center were told to work from home, Westover said.

Westover also said most of the participating schools, including Eastside, are located in areas that are under shelter-in-place orders and travel restrictions because of the virus.

“We’re trying to figure out if we’re going to do it in the summer or in the early fall,” she said.

Pam Bedford, who runs the Institute of Culinary Arts at Eastside, said she intends to try to keep the team together despite the graduation of three of the members this semester.

“I’d like for them to compete, but it would depend on who is available to work within their college schedules,” Bedford said.

Brown said everyone at Eastside was excited when it was announced that her team was a finalist in the competition.

This year’s national competition theme is “ethnic dish.” The Eastside team initially chose “Tacos in Space” before they discovered that tacos would break apart in space.

Next, they decided on quesadillas because they’re glued together with cheese. The team’s quesadilla dish consists of Mexican-based pork carnitas with refried beans, salsa verde and guacamole.

Mayer described the sauce as nontraditional. He said it’s condensed after being heated on a stovetop. That should keep the quesadilla from floating away in space.

Sullivan University in Kentucky is offering full-tuition scholarships to the winning team, and Mayer said he will definitely consider that opportunity if his team finishes first.

This isn’t the first time Eastside students have earned recognition in the culinary world.

“I wouldn’t be where I am right now if it wasn’t for the culinary program,” said Bilitzer, 27, who won a grand prize of $10,000 with the championship and now works as an executive chef at a restaurant in Louisville, Kentucky.

Noah is a reporter for WUFT News who can be reached by calling 352-392-6397 or emailing news@wuft.org.
Previous Children’s Trust Of Alachua County Seeking Ways To Help During Coronavirus Outbreak
Next Spaying Of Strays And Low-Income Owners’ Pets Is Put On Hold Because Of Pandemic