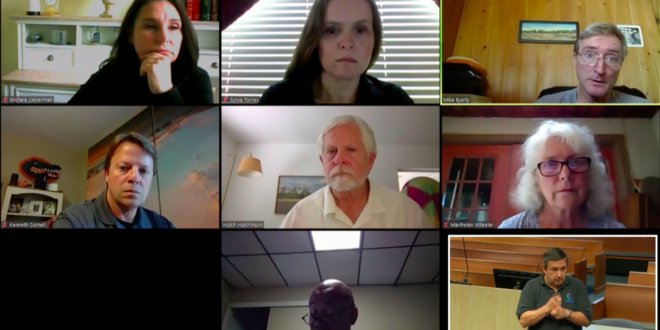 Alachua County Commission Chairman Robert “Hutch” Hutchinson on Tuesday said he was preparing to impose a curfew and mandatory mask use in public because of the coronavirus.

Hutchinson directed county officials to draft a shutdown order that would be more stringent than what the county or state has in place already in terms of keeping residents safe from COVID-19.

“We’re going to have it in our hip pocket if we get the signal from hospitals or others that things have gotten out of control,” he said during the county commission’s latest videoconference meeting.

Alachua County had 139 confirmed cases of residents having contracted the coronavirus as of Tuesday, according to statistics from the Florida Department of Health. The state itself had a total of 14,747 confirmed cases, with 5,126 in Dade County and 62 in Marion County.

Outdoor recreation in the county would be limited to solitary activities, though family members from a single household could do walk or ride their bikes along the streets together.

The order would also establish a curfew, though with exceptions of essential activity, homelessness and victims suffering domestic abuse. Additionally, the draft requires curbside delivery services for businesses and that businesses could only sell essential items.

The commission and city officials debated the details of the draft that Hutchinson said would be widely circulated to law enforcement should its implementation become necessary. The commission has not allowed for public comment during its virtual meetings, something Torres said needs to be reconsidered for future electronic gatherings during the pandemic.

Commissioner Ken Cornell said the county’s existing mandate was a “strong order” that should remain in effect for another week. County Manager Michele Lieberman agreed.

Commissioner Mike Byerly, however, called the draft as an “exercise” and said it wasn’t helpful to discuss the more extensive measures so soon.

“Some of these suggestions might make sense, but others won’t until we get to a much higher threshold,” Byerly said.

Torres said the county’s existing stay-at-home and essential businesses-only mandate was amended to limit business occupancy to one customer per 1,000 square feet in accordance with Gov. Ron DeSantis’ statewide order.

Byerly said the 1,000 square foot rule “fell out of the sky,” and needs to be “tweaked up a little.” He said he agrees with the approach, but the number needs to be adjusted.

“Our goal needs to be to minimize public interaction in ways where they can’t safely social distance themselves, and by far – I’ll say it again – the line (outside the stores) is where most people are coming into contact with each other rather than being in the store,” Byerly said.

He added, “I think we’re, from a public health perspective, doing more harm than good.”

Commissioner Charles Chestnut agreed and said people are confused by the governor’s order. He suggested tweaking the number to allow one customer per 500 square feet. Chestnut also said he was “scared” of how grocery stores are sanitizing freezer doors and how it was potentially affecting produce and that people were ignoring floor markings for social distancing.

The commission decided against adjusting its current burn ban. The state continues to issue burn permits in the county despite Hutchinson’s concern of April’s dry weather posing fire threats.

“I wanted our first responders, our fire personnel, to not have to be chasing down brush fires and dealing with that,” he said.

Hutchinson proposed an order based off of a Miami initiative to establish a “strong recommendation” for masks to be worn in public places. The Centers for Disease Control and Prevention last week urged all Americans to wear masks, even as President Donald Trump said he would not be doing so, The New York Times reported.

Cornell said his family has incorporated this in their own lives and does not allow for the use of N95 masks so that they may be saved for health care providers. He slipped his mask on briefly during the meeting.

The chairman added: “It’s a remarkable thing in our community – folks come together and help us all get through this. We’re going to have a couple of tough weeks ahead.”

Previous Stuck At Home: What Is The New Normal In The COVID-19 Era?
Next The Point, April 8, 2020: Gainesville Rabbi Works To Make Seder Dinners Available For Passover