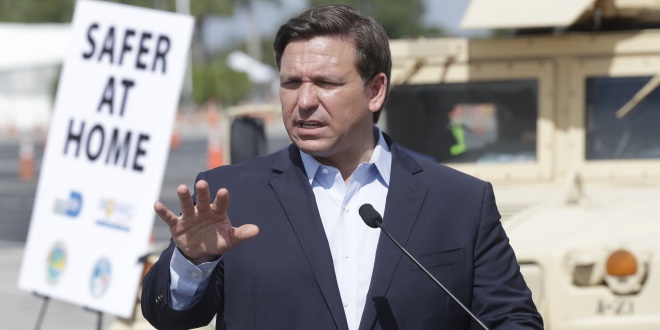 Florida Gov. Ron DeSantis speaks during a news conference at a drive-through coronavirus testing site in front of Hard Rock Stadium, Monday, March 30, 2020, in Miami Gardens, Fla. Gov. Ron DeSantis doesn't want the people on the Holland America's Zandaam where four people died and others are sick to be treated in Florida, saying the state doesn't have the capacity to treat outsiders as the coronavirus outbreak spreads. (AP Photo/Wilfredo Lee)

DeSantis, during an appearance at a COVID-19 testing site at Hard Rock Stadium in Miami Gardens, suggested Monday that physical distancing rules and guidelines for Southeast Florida could apply through the “middle of May.”

“This is the time to do the right thing. Listen to all your local officials. We do this until the middle of May, and then we’ll see where we’re at,” DeSantis said. “I think a lot of the stuff that has been done has been helpful. I think this will continue to be helpful. And, hopefully, once we get this thing under control, then we can go back and start enjoying life the way we used to.”

Later in the day, DeSantis put his reevaluation timeline for the Southeast Florida counties at April 15.

“We’re going to be evaluating every day and seeing kind of what some of the trends look like,” DeSantis said while at the Ballpark of the Palm Beaches in West Palm Beach where testing will start to be offered this week.

DeSantis, who issued his first executive order about COVID-19 on March 1, has recently been suggesting a 15-day timeframe to reevaluate the state’s ongoing response to the virus. COVID-19 is the respiratory disease caused by the coronavirus.

On Sunday, President Donald Trump announced that White House “social distancing” guidelines would remain in place through the end of April. He had previously expressed a desire for the country to be “opened up” by April 12, Easter Sunday.

“Nothing would be worse than declaring victory before the victory is won,” Trump said in remarks Sunday. “That would be the greatest loss of all.”

DeSantis said he thinks Trump’s selection of April 30 was made with the anticipation that isolation orders will ease before that date.

“I think he wanted to move in rather than move out,” DeSantis said.

DeSantis’ “safer at home” guidelines are directed at people in Miami-Dade, Broward, Palm Beach and Monroe counties, which combine for nearly 60 percent of the state’s cases.

“This will build off what Mayor Gimenez has already done and gets all four counties operating under the same sheet of music,” DeSantis said, referring to Miami-Dade County Mayor Carlos Gimenez.

Sen. Jose Javier Rodriguez, a Miami Democrat who is among officials pushing for DeSantis to impose a statewide stay-at-home order, welcomed the “needed uniformity” for Southeast Florida.

“However, no corner of our state is immune, and a piecemeal, patchwork approach will not cut it,” Rodriguez said in a prepared statement. “Because we remain so far behind on testing, we cannot know how far behind we also are in trying to catch up with the virus as it spreads. Counties like Lee, for example, have medical professionals urging for a safer-at-home order, reminding us why a statewide order is the best approach.”

Monroe County has set up a checkpoint on U.S. 1 to limit automobile travel into the Florida Keys to residents and essential personnel.

The state also has set up checkpoints on Interstate 95 at the Georgia border and on Interstate 10 at the Alabama border as it tries to require travelers from New York, New Jersey, Connecticut and Louisiana to self-isolate upon arriving in the Sunshine State. The New York City area and the New Orleans area have been deluged with coronavirus cases.

At the checkpoints, motorists from the targeted states are required to complete forms that include contact information and trip details.  They are given cards on what to do if they exhibit the fever, cough, or shortness-of-breath symptoms attributed to COVID-19 while in isolation.

Due to international travel into South Florida, DeSantis suggested that the virus could have been spreading in the area during this year’s Super Bowl, which was played Feb. 2 at Hard Rock Stadium.

“We need to have folks that are willing to return to service,” DeSantis said.

The News Service of Florida is a wire service to which WUFT News subscribes.
Previous ‘Law Enforcement Is Last Resort’: Alachua County Sheriff On Stay-At-Home Orders
Next Exclusive: Owners Of Landmark Florida Beach Restaurant Under US Tax Evasion Investigation