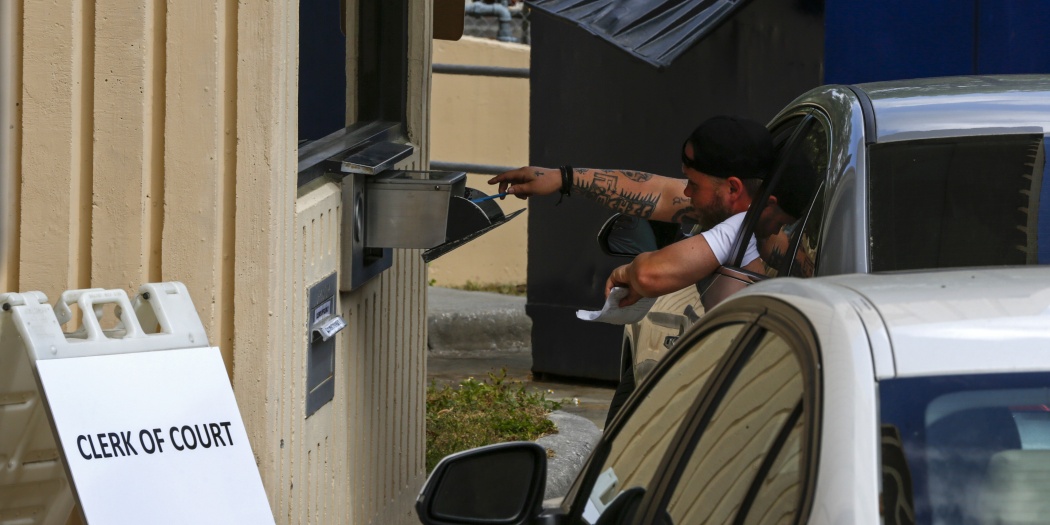 People use the drive-thru at the Alachua County Clerk of the Court building in Gainesville, Fla. on March 25, 2020. The inside of the building was closed except for special appointments. (Sam Thomas/Fresh Take Florida)

MIAMI – Some Florida courts are effectively shutting down through the middle of April while others remain partially open in a fight to stop the spread of COVID-19. It’s leaving legal officials frazzled and uncertain about how justice can be served during the pandemic.

“I’ve never seen anything like this,” said Hal Schuhmacher, president of the Florida Association of Criminal Defense Lawyers.

At least some state courts were still approving protective orders in domestic violence cases and wiretaps for police eavesdropping, and conducting hearings to evaluate people arrested under mental health laws to protect themselves.

In Washington, the head of the office that oversees federal courts, James Duff, urged officials to conduct in-person proceedings only when absolutely necessary, and conduct everything else electronically. Some states, including West Virginia and Hawaii, closed their federal courthouses entirely.

In South Florida, trials were delayed until at least April 27, and courthouses sent many employees home. “The ends of justice served by taking that action outweigh the interests of the parties and the public in a speedy trial,” the court said.

In central Florida, in the federal court district that covers Orlando and Tampa, U.S. marshals were ordered to block anyone from the courthouse with a fever, cough or shortness or breath; who has or been in contact with anyone with the virus; or who traveled to any country under quarantine within 14 days.

In northern Florida, including Tallahassee, Pensacola and Gainesville, federal courthouses were closed to the public, and detention hearings and arraignments were held by video conference. All jury trials and grand juries were cancelled through the end of the month.

The Florida chief justice urged circuit judges statewide to consider using technology to hold virtual court hearings, and said the constitutional rights of defendants “must also be considered in all cases by the presiding judge.”

Canady said he may extend his emergency order in the coming weeks.

“We are now living our lives in a way that none of us would have contemplated a few weeks ago. And none of us can count on things soon getting easier,” Canady said in a video on the court’s website.

Under the order, courts were continuing to hold first appearances, criminal arraignments and other court proceedings deemed critical. That means a recently arrested defendant would not necessarily remain in jail without a bond hearing. Legal deadlines affecting requirements for speedy trials for state criminal defendants were suspended until April 20.

All Florida Supreme Court oral arguments are postponed until at least June, although the court’s schedule showed no arguments scheduled yet for June, either.

In Broward County, for example, all four state circuit courthouses announced a two-week shutdown, and the county suspended court operations of the 17th Judicial Circuit until April 17.

In the 4th Circuit, which covers Duval, Clay and Nassau counties in northeast Florida, face-to-face actions, such as pre-trial conferences or hearings, were being rescheduled or done electronically.

David Robbins, a criminal defense attorney who runs a law firm in Jacksonville, said circuits were interpreting Canady’s order differently. He said every circuit should have completely shut down, because no one wants to be exposed to the virus.

Robbins said he supported limiting arrests and releasing low-level offenders to prevent the virus from spreading in courts and county jails. These releases were already occurring in Hillsborough, Volusia and other counties.

The Florida Department of Corrections this week confirmed that an employee at the Marion Correctional Institution Work Camp in Ocala tested positive, furthering concern from officials and those with loved ones inside state prisons.

The agency said none of the 274 inmates or other employees were exhibiting symptoms, although three other employees were on leave and in self-isolation because they had been around the affected employee. The worker has been out of work for eight days and will not return to work until he is cleared, the state said.

Postponing and canceling courtroom hearings to prevent the spread is “basically a Band-Aid approach” toward a much bigger problem, Robbins said.

“I don’t think we have a plan. We’ve used emergency procedures before in hurricanes,” he said. “This, in my opinion, is something much far worse.”

It’s causing unforeseen issues for defense lawyers and firm partners Adam Rossen and Manny Serra-Jovenich in Fort Lauderdale. Rossen said the shutdown will negatively impact people on pretrial release who can’t get their ankle monitors removed, were stuck in jail waiting to hear about the conditions of their bond release or were inadvertently violating their parole.

Without a statewide solution, issues in local judicial systems could snowball, Rossen said. Lawyers, judges and defendants said they were uncertain but agreed it probably won’t end after three weeks.

In Miami, Chief Judge Bertila Soto of the 11th Circuit said her court was working to use technology. “Our priority is to protect citizens’ rights to due process, while balancing public health,” Soto said in a statement.

Schuhmacher, of the criminal defense lawyers association, practices in Monroe County and last week spoke with his client at the Monroe County Detention center through a “bank-teller” window.

The state judicial circuit covering the Florida Keys was limiting court appearances, but not shutting down or canceling everything, according to its chief judge.

Schuhmacher said the pandemic was an event no one could have anticipated. He said until the government takes more direct action, people will be sitting in jails and more issues will arise.

“We have faith in our government to be prepared for these things,” he said, “and then you realize we aren’t ready.”

Dana is a reporter for WUFT News who can be reached by calling 352-392-6397 or emailing news@wuft.org.
Previous UF Health Physician Sifts Facts From Fears About COVID-19 And Pregnant Women
Next Florida Governor’s Coronavirus Dilemma: Health Vs. Economy