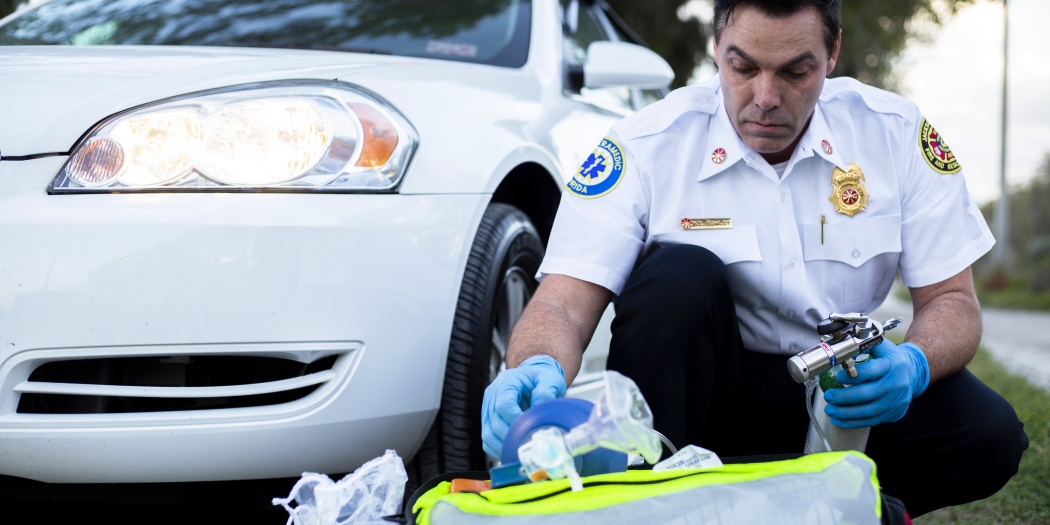 Mark Rowley, a 46-year-old assistant chief with Jacksonville Fire and Rescue Department, takes out the equipment and medicine he would use to treat someone who was overdosing on March 10, 2020, in Gainesville, Fla. (Chris Day/Fresh Take Florida)

By Danielle Ivanov and Everitt Rosen

Paramedic Mark Rowley didn’t recognize the face of the young man on the stretcher. Until he looked past the oxygen mask and the wires, he saw only another overdose victim clinging to life.

But it wasn’t just another victim: He was his mentee, barely breathing after smoking what he thought was marijuana that turned out to be laced with fentanyl, a powerful opioid.

“It was my friend — my friend,” said Rowley, assistant chief of information services at the Jacksonville Fire and Rescue Department. “I’m not a parent, but that was about the closest to understanding I could get to a parent who has a child who does drugs or overdoses or dies.”

Rowley’s friend, who is not named to protect his identity, survived his fentanyl overdose.

First-responders like Rowley carry a powerful, opioid-overdose reversal drug – known as naloxone – that can save lives when injected into a patient or sprayed into his nose. The U.S. surgeon general has urged broader access to the drug to reduce overdose deaths, but the Legislature failed to pass a measure that could have made the drug more widely available in Florida’s schools – despite it being free of charge to schools in many cases.

The bill, SB 120, was not especially controversial – it passed two Senate committees unanimously before it was bottled up in a third committee, and a House version of the proposal, HB 331, died earlier this month in a subcommittee without a vote.

Pizzo, a business consultant and former state prosecutor, said the bill would have allowed trained school employees to administer the drug quickly without waiting for paramedics to arrive. Rowley agreed that because opioids can hit peak effect in mere seconds or minutes, emergency responders can arrive too late to save students’ lives.

“What parent wouldn’t want something to be on-site to give their kid a chance?” he said.

The bill did not expressly say how school employees would need to be trained, other than requiring schools to “adopt a protocol developed by a licensed physician for the administration of the drug by school personnel who are trained to recognize an opioid overdose and to administer naloxone.”

“Allowing untrained and unsupervised school personnel to administer this drug made no sense to us putting children at risk,” Flaugh said in an email interview. Gov. Ron DeSantis appointed Flaugh to an education advisory committee.

Rowley, the first responder, said students who try drugs at school don’t realize the risks because opioids like fentanyl are often mixed into other drugs.

“This is not your grandmother’s heroin,” Rowley said. “As a paramedic… you think you can save everybody. But you can’t.”

In the Capitol, Pizzo said Rep. Colleen Burton, R-Lakeland, chairwoman of the House Health Quality Subcommittee, refused to hear the legislation because she believed Florida’s Good Samaritan Law gives schools enough access to naloxone. Burton did not respond to two calls and an email asking to discuss the issue.

The Senate bill would not have provided schools any money to buy naloxone but would have authorized schools to buy it at fair market, free or reduced prices, and it would have exempted school staff from liability as long as they were trained.

The U.S. Food and Drug Administration, which approved naloxone in 1971, said dose packages can run from $29 to $4,641. Narcan, the most common naloxone brand, costs $142 per box of two doses.

At least one company, Adapt Pharma, offers two cartons of its branded drug, Narcan, to every high school for free under its Narcan Nasal Spray Schools Program.

Lieberman organized the group after working for a needle exchange program to prevent the spread of HIV and other transmittable and infectious diseases. While working there in Miami, he said, he would give out doses of Narcan, the nasal spray form of naloxone, to opioid addicts.

“People would come in and say ‘I saved a life this morning. I need a refill,’” Lieberman said. “Right away, I saw how big of a difference Narcan made in all their lives.”

As an opioid-overdose reversal drug, naloxone only halts opioid overdoses and has no negative effects if used on someone who was not exposed to opioids.

“The worst that could happen is they get a runny nose,” Rowley said.

Lieberman, Grodin and Dreiling reached out to state representatives after learning Florida was not among at least six states that currently allow school employees to stock and administer naloxone: Virginia, Georgia, New Jersey, Pennsylvania, New Hampshire and Massachusetts.

In 2017, Florida accounted for 12% of national daily opioid deaths, according to data from the Florida Department of Health. Former Gov. Rick Scott in 2018 signed into law a bill designed to combat opioid addiction following years of high overdose death rates statewide. Florida has been facing the opioid epidemic for years, but most efforts until now have not been focused on students.

According to Rowley’s data from Duval County, three children aged 0 to 9 years old and nearly two dozen between 10 and 19 overdosed on opioids in 2018. On school campuses specifically, he said, there were three overdoses in 2019 and one in 2018.

In other words, students are being exposed.

Dreiling said that while some people think on-campus access to naloxone might increase opioid use, she believes it is needed and should be destigmatized.

Danielle is a reporter for WUFT News who can be reached by emailing news@wuft.org or calling 352-392-6397.
Previous The Point, March 24, 2020: ‘Stay At Home’: Alachua County Issues Mandate To Limit Coronavirus Spread
Next Alachua County Aiming For UF Students To Say They Live In Gainesville For 2020 Census