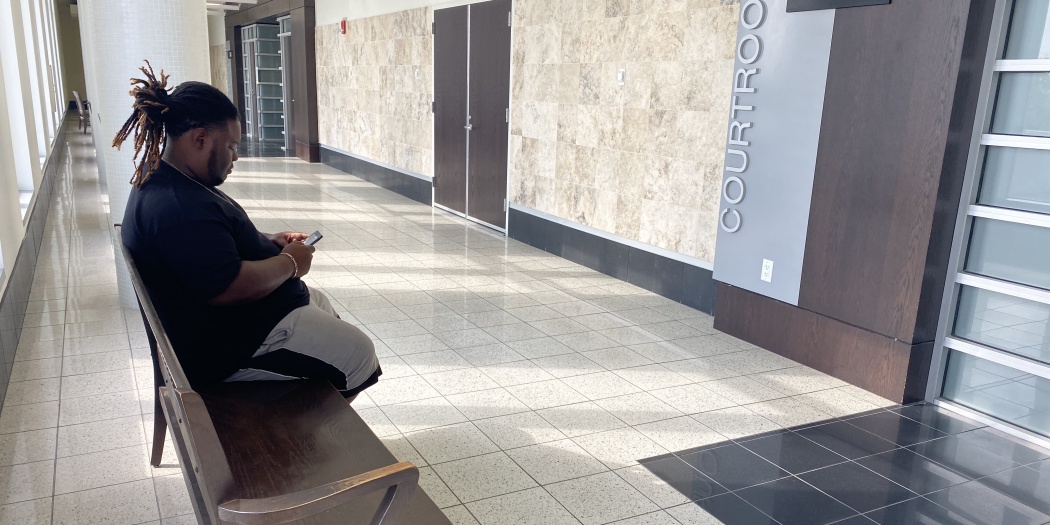 When Morris Simon was separated from his girlfriend, he didn’t know whether he would get the chance to say goodbye, or even how he would find out her sentencing. (April Rubin/WUFT News)

Morris Simon came with his girlfriend of two years to the Alachua County Courthouse in Gainesville on Monday, intending to be there as she faced potential sentencing in a drug use case. But when he tried to enter Courtroom 3B with her, a security officer turned him away.

Initially, Simon, 28, of Melrose, who works at an asphalt paving company, thought it was because the proceedings involving other defendants were private. But when he learned it was due to concerns about the coronavirus, Simon said he understood the precaution.

“Whoever has been all over Florida or anywhere, they might have been around the virus, so they’re helping to slow it down,” he said.

Turns out Simon and anyone else prevented from entering Judge William Davis’ or any other courtroom in the courthouse should not have been, according to Christy Cain, public information officer for the Eighth Judicial Circuit of Florida.

It remains unclear who gave the order to only allow defendants and litigators into the courtrooms, Cain said, though a sign posted on the door of each one declared it was “for public safety reasons” and said, “Thank you, Court Administration.”

Family members, victims, victim representatives and members of the media were not allowed in.

Hours after all of the morning court proceedings were held, Cain sent out a news release stating that Chief Judge James Nilon had ordered changes to normal courthouse rules through March 27.

All jury selection, jury trials and grand jury proceedings will be suspended. So would all county and circuit criminal court events, except for first appearances, bond reduction hearings, in-custody plea hearings in which a defendant is expected to be released from jail or prison, and “matters which the court determines to be urgent upon motion of a party,” Nilon ordered.

Hearings in family, juvenile, civil, probate, guardianship, mental health, and traffic divisions were to be conducted by “electronic means” or postponed, except for hearings involving juvenile detention or domestic violence cases, the judge mandated.

While waiting outside Davis’ courtroom, Simon worried that his girlfriend might be sent to jail.

“They could have at least explained why I had to leave,” he said of the court security personnel. “What if she does go in – and I didn’t get a chance to say bye or wave at her?”

The two soon reunited with a hug after she walked out of the courtroom free to go.

Edward Birk, a news media and First Amendment attorney based in Jacksonville, said the U.S. Constitution mandates that criminal courts be open to the public. That’s to protect defendants through accountability and to maintain public confidence in the judicial system, Birk said.

“What happens in courts, criminal courts especially, belongs to the public,” he said.

Birk said closing courtrooms isn’t acceptable, even when courthouse officials are acting “on the fly” to adapt to the COVID-19 pandemic. Family members, victims, members of the media and the general public should be let in while sitting a safe distance away from each other, Birk said.

If excluding the public from entering the courtroom during a sentencing is deemed by an appeals court to be a “harmful error,” and thus a constitutional violation, then the lower court may have to resentence defendants in an open hearing, the attorney said. Otherwise, it would be a “harmless error,” in which the mistake did not deprive enough right to be of issue, he said.

“If a constitutional right starts to slip away, everybody needs to remain vigilant and fight for it,” Birk said.

A church office employee, who declined to share her name with WUFT News to protect her identity, arrived at the courthouse to witness her son’s sentencing. She said he had been in and out of both jail and rehabilitation for drug abuse. She hoped her son would get long-term rehab.

“I’m disappointed in the fact that I can’t have my son see that I’m there,” she said of the restriction barring her from his courtroom proceeding. “Even though he doesn’t want that kind of support now – in the long run, I want him to know I was here.”

The mother said she understood that precautions against the spread of COVID-19 were necessary, and hoped the judge would have seen her victim impact statement ahead of time.

“I just have to trust God that he will take over and give us the reaction we need,” she said.

April is a reporter for WUFT News who can be reached by calling 352-392-6397 or emailing news@wuft.org.
Previous Supervisors Prepare For Election Day With Soap And Sanitizer
Next Gainesville City Commission Holds Emergency Meeting To Discuss COVID-19