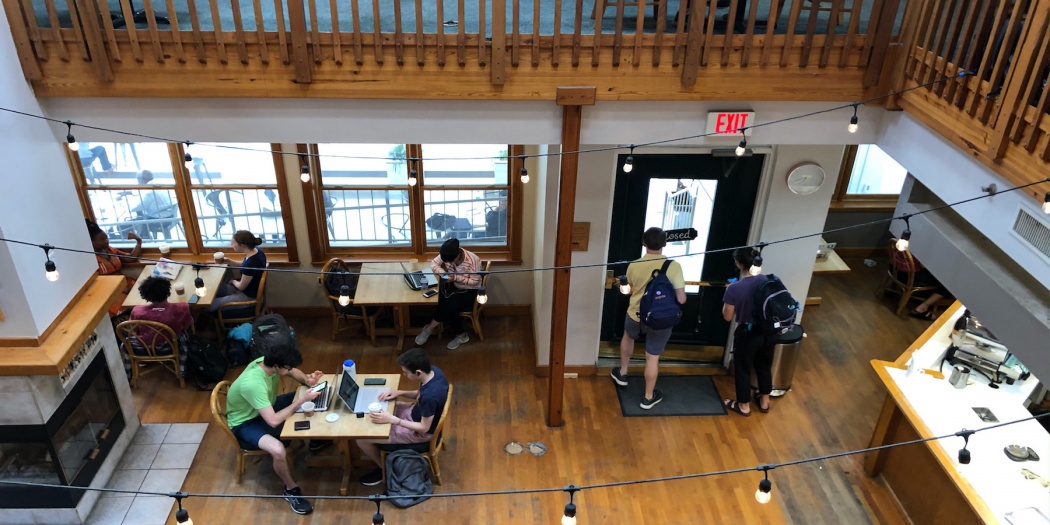 Despite UF’s transition to online classes, Pascal’s Coffeehouse at the Christian Study Center remained full of customers in the middle of last week. “We've taken all the precautions we can and are continuing to think about new ways to protect our customers so that this can be a home for them,” said Lauren Babb, manager of Pascal’s. (Lauren Rousseau/WUFT News)

As major businesses close throughout the country, local coffee shops in Gainesville are taking varying levels of precautions against the spread of germs and bacteria.

Owners and managers of coffee shops throughout the city have stressed their efforts to constantly sanitize frequent points of contacts — from tables and doorknobs, to light switches, coffee stations and cash registers — and encourage employees and customers to frequently wash their hands. Concerns about the coronavirus have been heard from customers and employees alike.

It’s a similar type of conversation as when Florida has a severe hurricane about to come through, said Layne Wrighton, co-owner of Maude’s Classic Café.

On Saturday, France and Spain joined Italy in the shutdown of all restaurants, shops and cinemas within the countries. On Sunday, the governors of Ohio and Illinois announced the closure of all bars and restaurants in the states.

Nationally, Starbucks has suspended its acceptance of personal reusable cups. Licensed Starbucks locations may also implement this suspension, which is the case for Starbucks on the University of Florida’s campus.

Opus Coffee and Coffee Culture have also suspended their use of reusable cups. Maude’s Classic Café said it is thinking of suspending reusable cups when the situation worsens.

At Wyatt’s Coffee, co-owner Gabe Chavez said the coffee shopwill only accept “absolutely clean” reusable cups from customers and that baristas are expected to wash their hands before and after dealing with personal cups.

Customers there have a large need for reusable cups, Chavez said, so because of the large amount of control Wyatt’s Coffee has over the situation, it will continue to accept reusable cups until the situation worsens.

If the coronavirus becomes more threatening in Gainesville, Maude’s Classic Café will not only restrict the cups entering its coffee shop, but the people, as well.

Wrighton said Maude’s Classic Café has ordered non-touch thermometers to ensure all of its employees are healthy before they start their shift. If the situation escalates further, she said they will check customer’s temperatures if they would like to stay and sit inside the café. If customers show a high temperature, or refuse to have their temperature checked, they will be asked to leave the café.

Pascal’s Coffeehouse at the Christian Study Center has moved its condiment tray and water pitchers behind the bar, according to manager Lauren Babb. This is a move that Maude’s is considering making as things progress.

At Opus Coffee’s location in UF Health Shands Hospital, customer Fernando Merida, also a professor of chemical engineering at the University of Florida, said he’s begun adding sugar to his coffee with a napkin to prevent the spread of germs. He said he also tries to pick a coffee stopper from the middle of the batch in hopes that it’s been touched less.

“If we don’t protect ourselves, we can affect others,” he said.

Henry Cano, a manager at the Opus Coffee in Shands, said employees wipe surfaces with Clorox wipes at least once an hour and wash their hands whenever they have any form of contact with customers.

Cano said that even when other Opus Coffee locations close, they usually try to keep its hospital locations open. If things become worse with the coronavirus, he understands if employees don’t feel comfortable going to work, he said. In that case, whichever customers want to volunteer to work can.

Sitting at Maude’s Classic Café, Cassandra Modrak, a graduate student studying behavioral and cognitive neuroscience at UF, said she’s more likely to go to coffee shops more often now, since classes have been moved online and she doesn’t want to be stuck inside her apartment.

“Not a lot of people can stay in their apartments,” she said.

If the situation worsens in Gainesville and people become afraid to leave their homes, both Maude’s Classic Café and Coffee Culture said they are considering starting delivery services.

“Having large groups of people in the same place is very quickly becoming not the best idea,” said Alisa Kenney, owner of Coffee Culture.

Owners and managers of coffee shops throughout Gainesville have expressed the importance of making customers feel safe.

At Pascal’s Coffeehouse at the Christian Study Center, Babb said some international students at UF have expressed a feeling of isolation during this time. She said the coffeehouse has had discussions with baristas on being sensitive to how this pandemic is affecting customers.

It’s valid for any business owner to be concerned about potentially losing customers as the coronavirus spreads, Kenney said. “But it’s a matter of pulling together as a community to fight this. Everyone’s going to be affected. So, we really just got to watch as this rolls out and do what we can and come out the other side.

Lauren is a reporter for WUFT News who can be reached by calling 352-392-6397 or emailing news@wuft.org.
Previous The Point, March 16, 2020: ‘A Rapidly Evolving Situation’: Florida Schools Closed Through March 27
Next Lawmakers To Vote Thursday On $93.2 Billion Budget