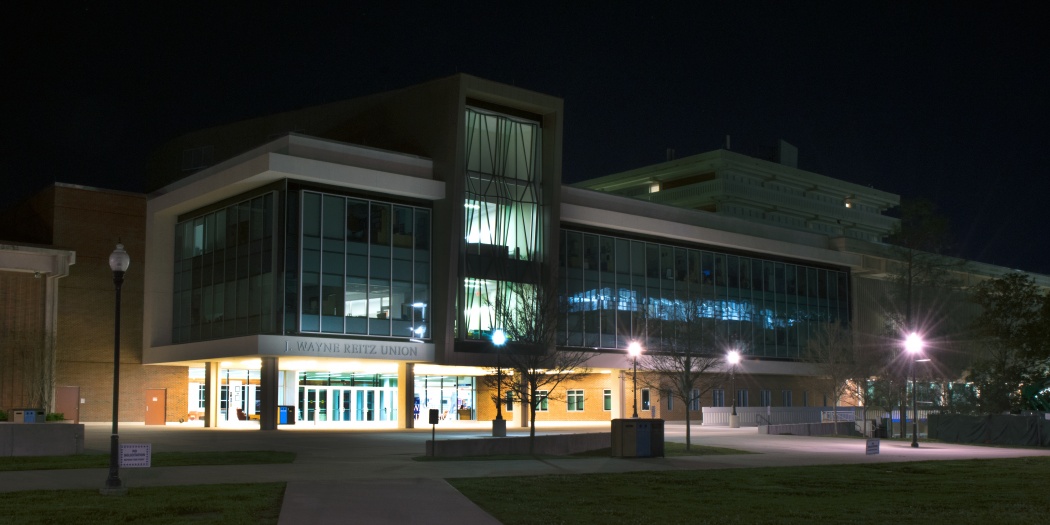 The University of Florida's J. Wayne Reitz Union sits quiet and empty on the eve of the campus switching to online-only classes through the end of the month. (Sam Schaffer/WUFT News)

‘The Airplane Is Flying While Being Built’: How Those On UF’s Campus Are Adapting To Coronavirus Restrictions

Students, faculty and staff on the day following the announced move to online-only classes at the University of Florida seemed prepared to adapt to the new societal limits of the coronavirus pandemic.

They also seem prepared to not always know what to do about it.

WUFT reporters set out to gather reactions to the unfolding situation from more than a dozen of those still finishing up in-person work and class meetings on Thursday. The emotions from those they encountered ranged widely — from disbelief to fear, resolve to outright frustration.

“It’s affecting everyone,” said Thomas Pearson, professor of epidemiology in the College of Public Health and Health Professions and the College of Medicine.

Pearson had already taped all of his lectures when the mandate to transition to online classes came across Wednesday afternoon from UF President Kent Fuchs, so he says he’s prepared to adapt to the new situation.

He said one of his main concerns is that the country’s leaders will get out in front of scientists in disseminating information.

“I think that’s unfortunate because science is not the problem, it’s the solution,” Pearson said.

Students seem to be taking the transition as well as possible.

“Shifting to online classes is a good thing,” Andy Phan, second-year pharmacy student, said. “But we’re still meeting two other times this week, so I think maybe waiving off the classes for this week would have been a better idea.”

Phan added that he does recognize the efforts of the college to keep students from falling behind in these odd times, and he thinks they are well-intentioned.

And these are odd times indeed.

“It is crazy. It’s something that I’ll probably remember for years down the road,” Phan said.

Graduate occupational therapy student Amber Green is also in a state of awe.

“I definitely mentioned to my friend, I was like ‘Are we in ‘The Twilight Zone’ right now? I’ve never experienced anything like this,’” she said. “Even with (the 2014 to 2016 outbreak of) ebola and things like that, people were concerned, but things weren’t shutting down like (this).”

“The professors seem to be kind of freaking out right now,” Green said.

“I do take science classes, so we have actual cadaver labs that we have to attend. So, having to do that in an online format — nobody seems to really know what’s going on,” she said.

Tyisha Hathorn, assistant director of admissions for the College of Pharmacy, said the new situation is affecting their current recruiting period.

“We’re in the middle of a recruitment cycle, so we have interview days,” she said. “We’re trying to really accommodate the students who have interviews (Friday).”

The admissions office is currently giving the option to prospective students to have virtual or physical interviews, but is contemplating moving to virtual interviews only.

Logistics and fright aside, other students seemed generally bummed to have so much free time in the coming weeks.

“I’m definitely like a class goer,” AJ Winer, first-year medical student, said. “So it’ll be different. I like seeing other people, so I definitely feel like I’ll be a little lonely.”

Diego Gordon, 23, said as an international student, he is concerned about his ability to travel back to his home country, Ecuador.

“Due to the travel restrictions, I will no longer be able to go home before my internship starts in the summer,” Gordon said. “There is a big level of uncertainty on if I can come back to the United States if I were to leave.”

He said that he had not noticed any discrimination about the coronavirus towards him as an international student, but he thinks it would be different if he were from a nation like China or Italy that had more cases.

As a first-year master’s degree student studying mechanical engineering, all of Gordon’s classes already had an online option. He said this has made the transition from in-person courses easier for his college.

Another hard loss some UF students faced amid a spreading fear of coronavirus was the cancelation on Thursday of the annual Dance Marathon event to be held March 28 and 29.

Since the main event is canceled, all other events and meetings are also stopped, and fundraising for their cause of fighting pediatric illness will be done on a more individual level, according to the fundraising captain Sydney Burns.

Paul Ellenberger, a junior fine arts major with a concentration in painting, said he struggles with anxiety but has never been anxious about germs before. Ellenberger now worries about avoiding germs everywhere, especially while riding the bus to get to campus.

Gainesville’s Regional Transit System on Thursday posted its extensive cleaning routine for the public to see.

Devin Ozmon, 20, who is also a junior majoring in fine arts with a concentration in painting prefers to look at the situation optimistically. She admits getting fine arts online will be difficult but thinks her professors have handled it pretty well.

“A lot of what being an artist has to do with is being able to problem solve and be flexible,” Ozmon said. “This is a good opportunity for us to work around that because we can’t always have the ideal studio situation.”

Ozmon said she will be going back home to Sarasota but considers herself lucky to be able to do so.

“I can take my stuff, I can pack up my car and leave,” Ozmon said. “But a lot of people, they don’t have that opportunity…”

Sehoon Kim, an assistant professor in the Finance, Insurance and Real Estate Department, said the transition to online classes has been smooth for his class because a lot of the course content is online.

“My colleagues and I are not having much of a hard time,” Kim said. “We’re all sort of huddling together to figure things out.”

Kim anticipated the transition coming because dozens of schools across the country had already transitioned to online classes.

“I have some family back in South Korea where they had been doing this weeks before,” Kim said. He is taking precautions, but he will still miss going to the classroom for at least the next few weeks.

“I like the hustle and bustle of campus,” Kim said.

Elizabeth Knewitz, 20, plans to go to campus less and avoid high-traffic areas like Marston Science Library, where she spends most of her time.

“I’ll probably still end up going sometimes,” Knewitz said. “It depends on if I stay here or go home.”

Knewitz, a sophomore accounting student from Miami, said she may go home depending on the response she gets from her job on campus. Most of her classes are already online with the exception of a scuba diving class she is enrolled in.

“We have a trip to the springs this weekend,” Knewitz said. “But they still haven’t told us anything about it.”

Morgan Clapham, 25, says she hopes students can use what they’ve learned in the stress and anxiety management class she teaches online to deal with the coronavirus.

Clapham said her graduate counselor education program’s material is more valuable in-person, so she is concerned about switching to online classes within a week.

“But there are people that don’t have the same privilege of being in good health like some of us,” Clapham said. “For them, this precaution could be lifesaving.”

Marissa Calderon, senior elementary education student at UF, thinks she won’t learn much or be as engaged if her classes switch to an online format.

“You have to participate in class, but if it’s online, you can guess your way through,” Calderon said.

The graduating senior is worried she will not receive enough internship hours to earn teaching certifications if the school she teaches at, Lawton M. Chiles Elementary, gets canceled. As of Friday, Alachua County Public Schools remained open.

Ann Valencia, 21, thinks UF’s transition to online classes because of the coronavirus was sudden.

“I would rather take an online class than get coronavirus,” Valencia said.

She plans to remain in Gainesville where she can focus on studying and be less distracted than if she traveled to her home in Miami like the university recommends.

“Kids our age are not taking this as seriously as adults are,” Valencia said. “It’s spreading fast, and there’s no treatment, which is the scary part.”

Khushi Ramlogun, 20, is waiting for confirmation about whether she has to leave UF and return home to Houston, Texas.

Rachael Marley said she thought the media was “playing up” the coronavirus but is more concerned after seeing UF’s response.

“As we’ve seen, UF waits until the very last minute to cancel for a hurricane, but with this, they canceled immediately,” Marley said.

Marley is president of the pre-dental honor society Delta Delta Sigma and had to change its March events to accommodate people leaving Gainesville.

The nutritional sciences senior said her professor for her metabolism course — widely known to be a difficult course in which to earn an A — is nervous that students will cheat if exams are online.

Chandler Whitenton, a junior public health student at UF, is nervous about how the coronavirus will affect her student assistant job at the College of Dentistry.

“I rely on my job to pay my rent and everything,” Whitenton said. “For now, UF said employees should work as normal.”

Lauren is a reporter for WUFT News who can be reached by calling 352-392-6397 or emailing news@wuft.org.
Previous Gainesville Celebrates The Female Pioneers Of Florida At The Matheson Museum
Next The Point, March 13, 2020: Florida Reacts To Coronavirus Pandemic; Major Events Canceled Or Postponed