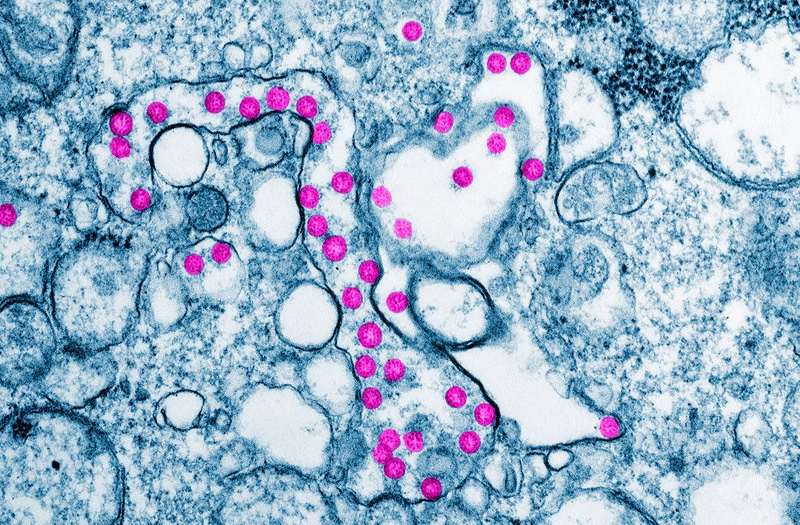 Viral particles are colorized purple in this color-enhanced transmission electron micrograph from a COVID-19 patient in the United States. Computer modeling can help epidemiologists predict how and where the illness will move next. (Hannah A Bullock and Azaibi Tamin/CDC/Science Source)

What You Need To Know About Coronavirus In Florida

Misinformation can spark fear and hysteria. We’re here to help. We’ll update this page with emerging information from reliable sources to answer all of your questions about coronavirus.

She wakes up to a pitch-black sky, hours before arriving at the cancer center. The sun still hasn’t risen by the time she’s dressed in scrubs, driving to work and reaching for the radio dial. For Dannielle Obermeier, clinical leader and registered nurse at University of Florida Health Shands Hospital, the workday begins with the … (November 14, 2022)

An international blimp magnate in north-central Florida will be sentenced in January in federal court after he pleaded guilty to defrauding the federal government of nearly $8 million in relief aid meant to help average Americans during the height of the COVID-19 pandemic, according to court records. Executive Patrick P. Walsh, 41, of Williston, Florida, … (September 14, 2022)

On Tuesday, UF Health Shands Hospital had 131 COVID-19 patients, 88 of them COVID-19 positive, Emily Mavrakis, a writer for UF Health Communications, wrote in an email. (July 21, 2022)

A panel of the 1st District Court of Appeal is scheduled to hear arguments July 20 after an Alachua County circuit judge last year refused to dismiss the potential class-action lawsuit. At least two other state appellate courts have taken up similar cases from other schools — and reached different conclusions. (July 6, 2022)

Sixty UF students have been waiting to study abroad in Japan since the country closed its borders in 2020. (June 7, 2022)

Nationally, college enrollment is at a historic low with one million less students enrolled today then before the pandemic, according to NPR. (April 27, 2022)

The Gainesville City Commission on Thursday voted to accept funding recommendations for allocating millions of federal dollars for local nonprofit organizations. The Community Foundation of North Central Florida’s board of directors evaluation team provided the recommendations to the commission. The American Rescue Plan Act of 2021 (ARPA), which President Joe Biden signed in 2021, provided … (April 22, 2022)

At the beginning of the vaccine rollout in 2021, data show Latinos lagged behind whites in vaccination uptake. In Florida, that trend is reversing with Latinos now taking the lead. Before the vaccination clinic opened its doors at the Farmworker Association of Florida, Teresa was waiting outside. She was first in line for her COVID-19 … (April 7, 2022)

Gainesville received half of its federal stimulus funds in July of last year and expects to receive the remaining funds by July. (March 29, 2022)

The sites no longer have to abide by the prior federal limit of 250 test per day.

University of Florida COVID-19 cases are updated once a day on its website.

Santa Fe College has a webpage dedicated to COVID-19 updates.

“To every single American, please know that the sacrifice you are making at this time is saving lives. Many, many lives,” said President Donald Trump during a coronavirus task force briefing.

“We can’t let the cure become worse than the problem,” said President Trump.

Jasmine is a reporter for WUFT News who can be reached by calling 352-392-6397 or emailing news@wuft.org.
Previous Mar. 9, 2020: Morning News In 90
Next Which U.S. States Have Confirmed Coronavirus Cases?