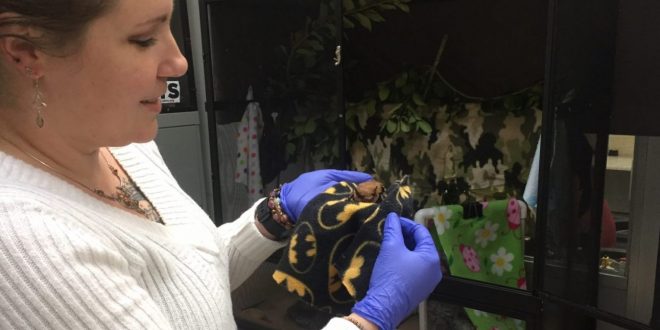 Tracy Pope shows off Charles, a brown bat that does not fly. Charles is one of Lubee Bat Conservancy’s outreach animals. (Kayla Price/ WUFT News)

From underneath a blanket came the whistle of a small evening bat with a missing wing. Since she can’t make it in the wild, home for her now is in the front office of the Lubee Bat Conservancy in Gainesville.

Over 200 other bats also reside at Lubee. The conservancy has 13 species of the animal, as well as an African Spurred tortoise, two Solomon Island skinks and a corn snake — all used as part of education programs.

Recently Lubee posted a series of videos on the coronavirus outbreak, after people in Wuhan, China, and surrounding cities killed many bats in the belief that the animals carried the disease, according to Demetria McBride, the conservancy’s media and development coordinator.

Research has found that bats were not the cause of the recent outbreak, McBride said.

“People need to be educated before they commit widespread ecosystem damage,” she said.

According to nature.com, Chinese researchers did find in a bat the closest match to the human coronavirus, but key differences in the genetic material suggest it did not directly infect people, though it could have done so through an intermediate host. The World Health Organization has since echoed this finding.

The bats were originally brought in from the wild in the early 1990s, due to concerns about conservation, said programs and event coordinator Tracy Pope.

High schools and college students who go to the conservancy are able to get an up-close look at the bats by going into their enclosures, Pope said.

Schools from Alachua and the surrounding counties have teamed up with Lubee’s educational programs. The conservancy has welcomed schools from the panhandle as well, Pope said.

Lubee’s Solomon skinks are part of their international education efforts. The conservancy has joined efforts with researchers in the Solomon Islands who recently found monkey-faced bats, a species once thought to be extinct. The skinks are used to educate people on habitat loss, and the damage it causes to native species, Pope said.

Efforts such as this, as well as social media, have attracted visitors from across the nation and the world, Pope said.

“Every generation to come through Lubee has a different focus,” McBride said. “Ours now is transparency.”

The animals are shown on the social platforms and have specific hashtags for their fans to follow. When Lubee announced that a bat had cancer, her followers raised enough money to cover 80% of her surgery, McBride said.

Lubee is home to both fruit bats and insect-eating bat species, though the majority are fruit bats, Pope said.

The fruit bats can be watched at home through explore.org, Pope said.

“It’s a great way to watch the African Straw-Colored Fruit bat because they are most active during the night,” Pope said. “During the day is their nap time.”

Bat keeper Becky Jasperse said these bats have the largest migration pattern of any mammal on the planet, with more than one million bats migrating.

“They love mangos, so at the end of their migration, they eat so many mangos that they often become obese,” Jasperse said. “Sometimes the branches snap and they fall to the ground.”

Kayla is a reporter for WUFT News who can be reached by calling 352-392-6397 or emailing news@wuft.org.
Previous The Point, March 2, 2020: Governor Declares Public Health Emergency In Florida Over Coronavirus Cases
Next Florida Has Two Confirmed Cases Of New Coronavirus