• WCJB: Local schools taking action against coronavirus. “In Marion County, school officials are meeting with the county’s emergency management team to discuss their plan of action and the administration at Santa Fe College is working similarly with college emergency management officials.”

• Citrus County Chronicle: Manatee release at Three Sisters goes off swimmingly. “After two years being nursed back to health, a 700-pound manatee named Carmen returned to the wild Thursday morning as professionals and volunteers released her without incident into Three Sisters Springs.”

• Suwannee Democrat: HCI officer arrested for unlawful compensation, money laundering. “A Hamilton Correctional Institution officer was arrested Tuesday on charges of unlawful compensation, money laundering and introduction of contraband. The affidavit states that an inmate told inspectors that the suspect provided cigarettes and other items to inmates who work on her internal grounds squad.”

• Gainesville Sun ($): Spurrier’s restaurant announces new details, operating partner. “The 16,700-square-foot restaurant will include three indoor-outdoor bars and a 5,500-square-foot rooftop lounge, called “Visors,” that will overlook the Celebration Pointe Promenade. Customers will be enveloped in a mid-century modern atmosphere, which will also include a sports memorabilia exhibit from Spurrier’s decades as a player and coach.”

• WFSU: E-verify Plan Moves Forward In House. “A bill that would require public employers to check the immigration status of new hires through E-verify got its first hearing in a House committee Thursday. The issue is a priority of Governor Ron DeSantis but some are questioning why it’s been allowed to languish in the House for so long.”

• Florida Politics: Ron DeSantis administration won’t release data on coronavirus testing. “Gov. Ron DeSantis went before cameras Thursday to assure Floridians his administration is taking action to protect the public from the threat of coronavirus. The Governor and Surgeon General Scott Rivkees say there are no confirmed cases of the disease, now called COVID-19, in the state. But they won’t say how many people have been tested for the disease.”

• Tampa Bay Times ($): What’s on Mike Pence’s schedule as coronavirus point man? A fundraiser in Florida. “It’s $2,500 to get in the door and $5,000 to take a picture with the vice president, according to an invite obtained by the Tampa Bay Times. And $25,000 buys dinner with him, too.”

• Miami Herald ($): Immigrants’ fear of 2020 Census could cost Florida billions in federal funding. “As local advocates fan out across South Florida to encourage census participation among Hispanic and immigrant communities, both traditionally under-counted groups nationwide, there’s another message they are repeating with discipline: you have nothing to fear from the once-in-a-decade count. ‘It has to be mentioned very explicitly every single time that census information is not shared with la migra, that it’s all kept confidential,’ said Maria Rodriguez, executive director of the Florida Immigrant Coalition (FLIC).”

• WJCT: Nation’s First Automated Rapid DNA Collection Pilot Program Rolls Out In Florida. “The Florida Department of Law Enforcement and the Leon County Sheriff’s Office said Wednesday the nation’s first fully automated Rapid DNA collection process is now being used at the Leon County Detention Facility. The way it works is DNA is taken from a suspect and then electronically submitted and automatically searched in the FBI’s Combined DNA Index System (CODIS) to see if the DNA is connected to an unsolved crime anywhere in the nation.”

• WUSF: St. Pete Pier Nears Completion, Opening Date Yet To Be Announced. “The $92 million project was originally set to wrap up in 2018. However setbacks ensued, delaying it to December 2019, and then even further back to this spring.”

• Florida Today ($): Why Feb. 29 for Leap Year? Because March 32nd just sounds weird. “The Romans, a Caesar and a pope all had a hand in developing the modern day calendar that is based off our surrounding celestial bodies.”

• Politics: Breaking Down The Impact Of Presidential Endorsements

• National: From ‘Steel City’ To A Service Economy, Changing Times In Pueblo, Colo.

• Science: How The Brain Teases Apart A Song’s Words And Music

• Books: ‘The Hidden Girl’ Is Smart, But Not Entirely Human

Kristen is a web editor and reporter for WUFT News. She can be reached by calling 352-392-6397 or emailing kaltus@ufl.edu. Follow her on social media @kristenaltus.
Previous Gainesville City Commission Votes To Start Evictions At Dignity Village Later In 2020
Next Live: South Carolina Primary Results And Analysis

The Point, April 5, 2020: Coronavirus: Florida’s Cases By ZIP Code, Another Sharp Rise In Cases, And Fear About The Villages

As Drought Adds To COVID-19 Woes, A Reminder To Conserve Water During Florida’s Dry Season 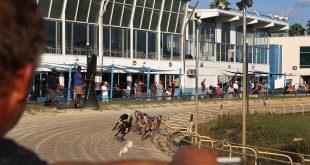 In his memorandum to senators, Galvano says fiscal responsibility in prior years, a budget reserve of over $2 billion, and anticipated federal aid should protect the state from the need for cuts.