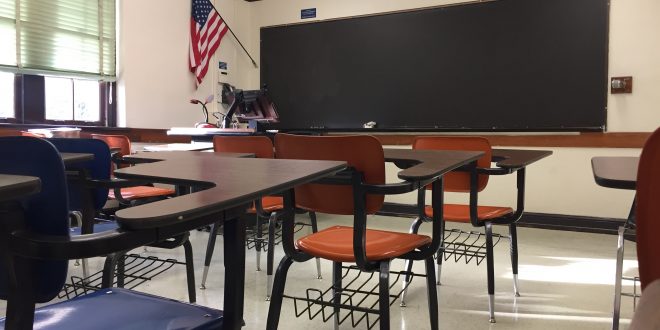 Alachua County had a 93% average attendance rate in the 2018-2019 school year, but the district is hoping to improve that figure through multiple programs. (Cassidy Hopson/WUFT News)

Eileen Roy, chairwoman of the Alachua County School Board, has expressed concern for the low attendance rates at some local schools.

“It just is shocking really,” Roy said. “We just have to do something about this absenteeism.”

The average attendance rate for Alachua County public schools in the 2018-2019 school year was 93%, which is comparable to other Florida counties of a similar size and with the state average.

However, attendance is still a significant issue, according to Jackie Johnson, spokeswoman for the Alachua County Public Schools district. The chronically absent rate in the same school year in Alachua County was 11.6%, a third of a percentage point higher than the state average.

“We still want to get as many kids in school as many days as possible because attendance affects academic achievement,” Johnson said.

In the U.S. more than six million children are chronically absent from school each year (a term defined by federal education officials as missing 18 or more days). This is concerning for educators, as the U.S. Department of Education has found a link between chronic absenteeism and lowered academic performance.

Early warning systems help identify students who are at risk of dropping out of school due to issues ranging from attendance to disciplinary problems.

School officials may ask these at-risk students to attend an educational planning meeting where they meet with the school’s guidance counselor, administrators or teachers to address their particular needs.

School attendance officers keep records of attendance and tardiness and assist students with attendance issues. The county is looking to hire more officers in the future, according to Johnson.

Public charter schools may not have these programs in place, however, as they are governed by their own board, not the Alachua County School Board.

Both schools describe themselves as tuition-free options to get a high school diploma for students under special circumstances. North Central Florida Public Charter School serves students who have dropped out of school or who are at risk of doing so and SIATech offers flexible class sessions that students can choose from.

Johnson considers these schools to be outliers and is more concerned with the effect poverty has on attendance.

“Attendance issues tend to be more serious in schools with a high number of children from a low socio-economic background,” Johnson said.

46% of students in Alachua County are considered to be economically disadvantaged. These are students who qualify for free and discounted meals under the National School Lunch Program.

In some cases, parents need older children to stay home and care for younger siblings, according to Johnson. Other times, a lack of reliable transportation is the cause of many absences.

Wendy Myers, the attendance officer at Westwood Middle School, finds transportation to be an issue influencing absences and tardiness at her school. They are currently understaffed for bus drivers and have doubled bus routes to compensate.

“Attendance is a problem at every school,” Johnson said. “You have some kids who have a large number of either excused or unexcused absences at every school. There are a number of ways we try to approach this issue, because there is no one silver bullet.”

Cassidy is a reporter for WUFT News who can be reached by calling 352-392-6397 or emailing news@wuft.org.
Previous Feb. 27, 2020: Afternoon News In 90
Next Gainesville City Commission Votes To Start Evictions At Dignity Village Later In 2020