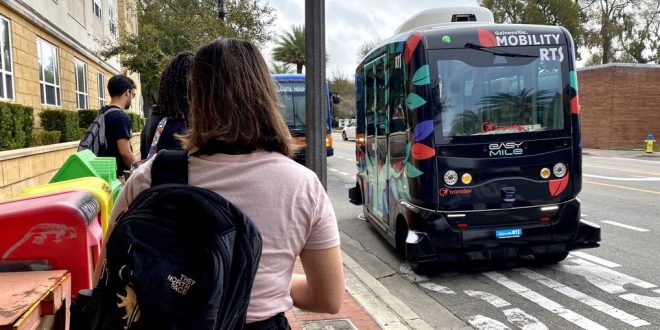 The driverless shuttle approaches its stop outside of 2nd Avenue Avenue Centre Apartments in Gainesville earlier this month. The bus service was suspended this week. (Emily Felts WUFT News)

Alejandra Leon, 22, an electrical engineering student at the University of Florida, saw the driverless vehicle pass by while working at a coffee shop across from the Innovation Hub.

“We’ve named it ‘WALL-E,’” Leon said the other day, referring to the main character of the animated science fiction film. “There’s a video somewhere of an RTS bus parking terribly at a stop. After it leaves, you see ‘WALL-E’ park perfectly.”

The small black and blue bus won’t be leaving its parking spot anytime soon, however.

The National Highway Traffic Safety Administration announced this week that it has suspended passenger operations for all 16 autonomous vehicles operating in the U.S., including the one being tested in Gainesville since early last month.

The federal agency did so after a driverless shuttle in Columbus, Ohio, unexpectedly stopped short while operating on Feb. 20. A video of the incident from inside the shuttle shows a passenger falling from her seat when the vehicle stopped. The vehicle operator and another rider were also displaced. The woman who fell went to a hospital and was treated for minor injuries.

Gainesville is supporting the suspension of its pilot shuttle project “out of an abundance of caution,” according to Rossana Passaniti, the city’s public information officer.

Neal Hemenover, 46, vice president of innovation at Transdev, a French-based international public transport operator, said the shuttles are allowed to run without passengers, but that Transdev and RTS both agreed it would not make any sense to do so.

Hemenover said while “there is still a lot to learn about autonomous vehicles,” he hopes the incident in Ohio would not impact their future deployment for long.

“This is an avenue basically to put a pause – and take a look at this incident under a microscope – and see if there is anything we can learn from it,” he said.

During its testing in Gainesville, the driverless vehicles looped from the Second Avenue parking garage downtown to the 12th Street roundabout. Their speed can reach 25 mph, but operators were prohibited from going faster than 8.6, which is why only one would run at a time.

Michael Kutyna, 41, a system programmer in an innovation hub office, complained about its slow speed.

“They need to not have it run during rush hour,” Kutyna said. “They move so slow and they create a traffic jam.”

Russell Mercer, 31, a project manager at UF’s information technology office, said he was excited to see Gainesville getting involved with driverless shuttles.

“The faster the better, the more the better,” Mercer said while also urging caution: “You have to be careful with pedestrians and cars and accidents and all that stuff. Really mitigate the risks.”

Crow Wilds, 45, who described himself as self-employed, wasn’t likely to get on a driverless bus, though. He shook his head as he watched one go by.

Emily is a reporter for WUFT News who can be reached by calling 352-392-6397 or emailing news@wuft.org.
Previous As Micanopy’s Cemetery Runs Out Of Space, Seminole Battleground May Prevent Expansion
Next The Point, Feb. 27, 2020: Why The Gainesville Driverless Shuttle Service Is Suspended For Now