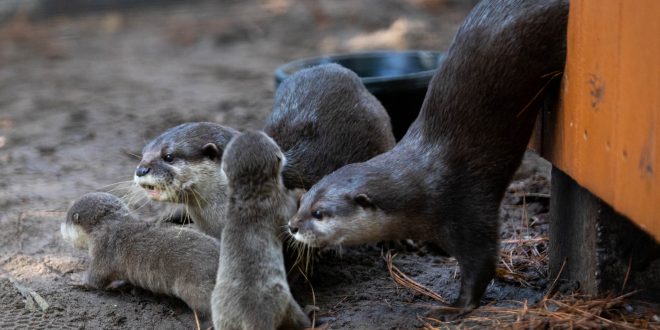 Five new members of a threatened species have begun emerging from their dens at the Santa Fe College Teaching Zoo to take swimming lessons from their parents, in view of the public.

The five Asian small-clawed otter pups, born at the zoo on Nov. 25, are doing well three months later and are now more visible than ever to zoo visitors, according to Jade Salamone, the zoo’s conservation education curator.

The animals were the first of their kind born at the zoo in almost a decade.

Because Santa Fe’s existing otters are past breeding age or otherwise unable to reproduce, the pups’ parents were brought in from other zoos under a species survival plan drawn up by the Association of Zoos and Aquariums. Chitra, the mother, was sent from the Santa Barbara Zoo in California, and Duncan, the father, was sent from Disney’s Animal Kingdom in Orlando.

The Asian small-clawed otter is native to South and Southeast Asia, where it is hunted for its pelt and its ostensibly medicinal organs, and where pollution and logging are destroying its habitat, according to the International Otter Survival Fund. It is the smallest otter species in the world.

The pups at Santa Fe have yet to be named because zookeepers are waiting until they have developed distinctive personalities, Salamone said. They have been on display since birth, but until recently they mostly stayed in their dens.

To keep the lifestyle of the otters similar to what it would be in the wild, the zookeepers oversee the exhibit but don’t offer much additional care to the pups. The primary care is given to them by the mother. The staff provides extra food for the parents and gives material for the dens, which the otters construct themselves.

The pups will be incorporated into educational presentations once the otters are comfortable with their trainers and with being around spectators.

“We hope it inspires new people to learn about otters and otter conservation,” Jonathan Miot, the zoo’s director, said.

Brianna is a reporter for WUFT News who can be reached by calling 352-392-6397 or emailing news@wuft.org.
Previous The Point, Feb. 26, 2020: Gainesville Airbnb Hosts Are Starting To Pay County Taxes — Just Like Bed And Breakfast And Hotel Owners
Next Data Reveals Drones Flying Dangerously Close In Increasingly Crowded Skies