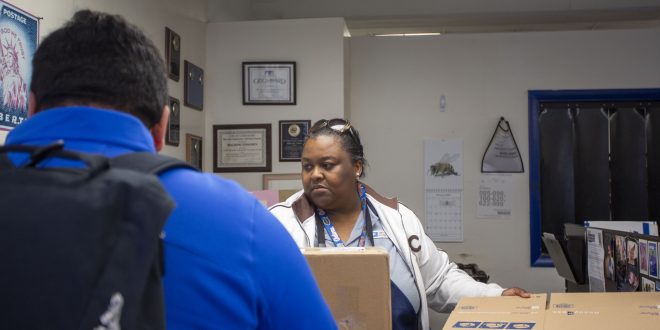 Gene Bradley has had a post office box at the University post office in Gainesville’s Midtown area for the last 20 years. The office was always full, usually with students mailing things between classes or getting passports.

“When you’re working at UF,” Bradley said, “and you need to do stuff at the post office, it’s right there.”

During a community meeting last week at the Headquarters branch library, the U.S. Postal Service announced that the University location will close Saturday, when the lease ends. The owner of the building has decided to sell to developers for a new mid-rise apartment building. No sites for a new building have been identified yet, USPS Real Estate Specialist Sandra Rybicki said.

According to Rybicki, the developers don’t have a post office in their plans. Rybicki gave a short presentation Tuesday at the Headquarters branch library, to a room of fewer than 10 people.

“Following this meeting we are going to begin the process of looking for a new building,” Rybicki said. “By the end of March I would like to hold my site selection.”

Anyone who has a P.O. Box at the University location will temporarily have their box relocated to the Main Street post office, Rybicki said. USPS will accept comments and ideas from the public until March 19. Rybicki asked that anyone who may have ideas on where they can put a new building should write her a letter:

There are a few specific parameters that USPS has for the new office. The building would need to be at least 1,600 square feet on 0.58 acres, with enough room for at least 20 parking spaces. They are looking for a land parcel close to campus between Southwest 34th Street and Waldo Road.

USPS does not have any sites in mind and there are no set dates beyond this Saturday’s closing. They are willing to buy a building that meets their needs or buy a lot and build one, Rybicki said.

Bradley, who is now retired, said he used to stop by the post office three times a week. He still lives just three miles north of the post office and called it a “Gainesville treasure.”

Kasamba is a reporter for WUFT News who can be reached by calling 352-392-6397 or emailing news@wuft.org.
Previous Feb. 24, 2020: Afternoon News In 90
Next Teacher Who Used Racial Slur In Class Is Disciplined, Will Be Transferred To Another School