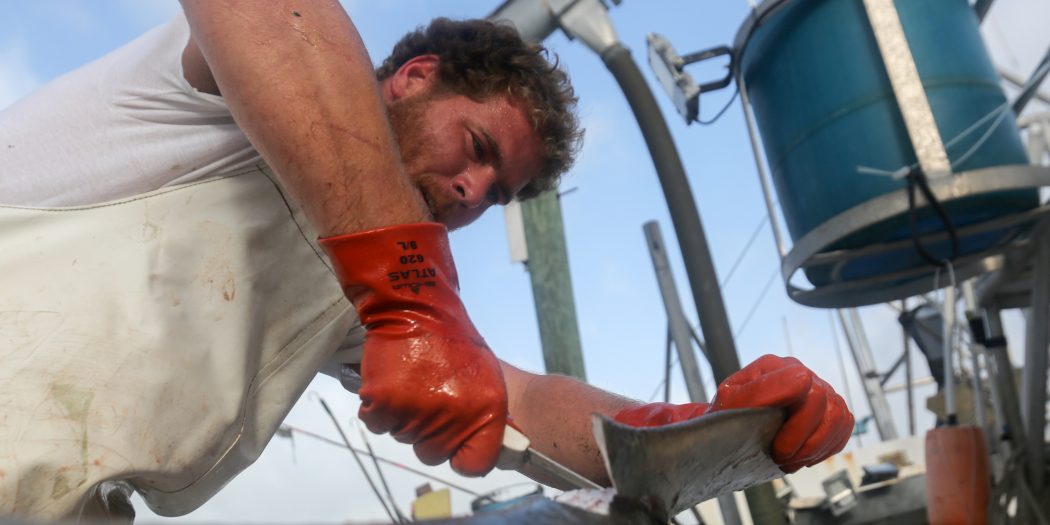 Ed Zirkel cuts the fins off of a shark while standing on the cooler aboard the Miss Maggie on Thursday, February 13, 2020, in Madeira Beach, Fla. Zirkel has been working on the Miss Maggie for 6 years and has been fishing for 15 years. (Chris Day/Fresh Take Florida)

MADEIRA BEACH, Fla. — Dave Campo has been catching sharks since he was 12 years old. He spends his nights bobbing on the Gulf of Mexico or the Atlantic Ocean, waiting patiently in the dark for his catch and hauling the 80 to 300-pound fish on board his boat, the Miss Maggie, with his crew.

When the Miss Maggie docks, each shark, already gutted and beheaded, is carefully lifted out of a large icebox that takes up about a quarter of the boat. Crew member Ed Zirkel, 30, dressed in white rubber overalls and bright orange gloves, grabs a sharp knife and, from the dorsal to the lower tail lobe, systematically slices off each fin. With the rubber waders off, a thick scar is visible on the front of his leg — it’s from a shark bite.

Once the sharks’ stomachs are removed, each heavy carcass is weighed, chopped into fillets, skinned, packaged and weighed again. By the time the men have finished their work, the floors of the boat and the fish house are covered with a thin layer of watery blood.

Pending state legislation in Florida could soon quash this scene.

In the U.S., shark finning — the gruesome process of stripping living sharks of their fins, dumping the fish back in the water and leaving them to struggle for life, drown or bleed to death — has been outlawed since the Shark Finning Prohibition Act was signed into law by President Bill Clinton Dec. 21, 2000. Many states since then have also banned the import, export and sale of fins, which is different from finning but nonetheless controversial. Two bills — HB 401 and SB 680 — are currently moving through the Florida legislature to ban all fin sales.

Those bills, pitched by Rep. Kristin Jacobs, D-Coconut Creek, and Sen. Travis Hutson, R-Palm Coast, aim to kick the shark fin industry out of the state and support the multi-million-dollar ecotourism industry. If passed and signed into law, it would completely ban the import of shark fins in the state and most of the export. In an effort to appease local fishing businesses, lawmakers added an amendment excluding commercial fishermen who currently have federal shark fishing permits from the export ban until Jan. 1, 2025.

To Jacobs and Hutson, banning the fin trade is a no brainer. But scientists and fishermen say shark conservation is a lot more complicated. Fishing is different than finning and may provide a conservation strategy.

Fueling finning is the demand for shark fin soup, a traditional luxury Chinese dish, served in restaurants across the U.S., according to Animal Welfare Institute. The nonprofit Oceana estimates that fins from as many as 73 million sharks end up in the global fin trade every year.

In 2017, Miami had the highest number of shark fin imports in the U.S. with 88,128 fins, according to the National Oceanic and Atmospheric Administration.

The U.S. Fish and Wildlife Service seized a shipment of about 1,400 pounds of shark fins in PortMiami earlier this year worth an estimated $1 million.

Jacobs said Florida should have no part in the fin industry while presenting HB 401 in January to the Business and Professions Subcommittee.

Steve Roden, chief executive of Guy Harvey Enterprises, said in an interview with Fresh Take Florida that sharks need to be protected for their ecological importance and Florida should take a stronger stance against finning.

“Effectively, we’re sending a message to the rest of the world that it’s OK to kill Florida sharks just for their fins,” Roden said. “Let’s send the message that it’s wrong.”

Robert Hueter, director of the Sarasota-based Mote Marine Laboratory’s Center for Shark Research, said the anti-finning bills may be well-intended but would have negative consequences.

Hueter said banning the import and export of fins in Florida will merely push the illegal trade underground, preventing regulation, and promote wastefulness by forcing local fishermen to throw away the fins on the sharks they catch.

“People are going to think that we’ve solved the problem, but we’ve just diverted it,” he said.

Hueter said the federal Sustainable Shark Fisheries and Trade Act of 2019, proposed by Sen. Marco Rubio, R-Florida, and Rep. Daniel Webster, R-Florida, is a much better example of effective legislation against finning. The act limits the import of shark fins in the U.S. to nations with similar shark finning deterrents and conservation and management practices.

U.S. shark fisheries are some of the most regulated in the world according to Hueter and NOAA. NOAA routinely updates its database of in-season fish. To earn a federal sharking permit, Campo and his crew underwent extensive conservation training, including how to properly identify sharks and how to rescue and resuscitate sea turtles. They can only sell the shark meat and parts they catch to a licensed shark dealer, and they use the leftover scraps for bait to prevent any waste.

Campo said Florida should continue to be the global example for sustainable, responsible shark fishing instead of driving the fin market further underground. He catches lemon sharks, tiger sharks, bull sharks, nurse sharks and more under the supervision of NOAA.

If HB 401 or SB 680 is signed into law, Campo said he could lose over half his income, would have to shut down his business and sell his boat to survive.

“I’d probably have to quit everything,” he said.

Dale Firm, a 57-year-old fish skinner for Campo, said he likely faces a future of welfare and food stamps if the bills pass.

“If they try to shut down the sharking, it’s going to offset a lot of lives,” Firm said. “I was hoping to retire out of here.”

With only three weeks left in the legislative session, HB 401 has passed all its committee hearings and awaits a second reading in the House. SB 680 is currently awaiting a hearing in the Rules Committee.

If passed and signed into law by Gov. Ron DeSantis, Hutson said he will request a study from Florida’s Office of Program Policy Analysis & Government Accountability to determine if the state shark fishermen, like Campo, are fishing sustainably enough to remove the bill’s 2025 cutoff.

This story was produced by Fresh Take Florida, a news service of the University of Florida College of Journalism and Communications. The reporter can be reached at divanov@freshtakeflorida.com. 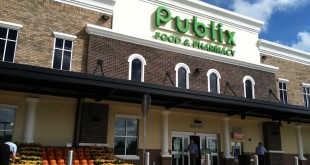