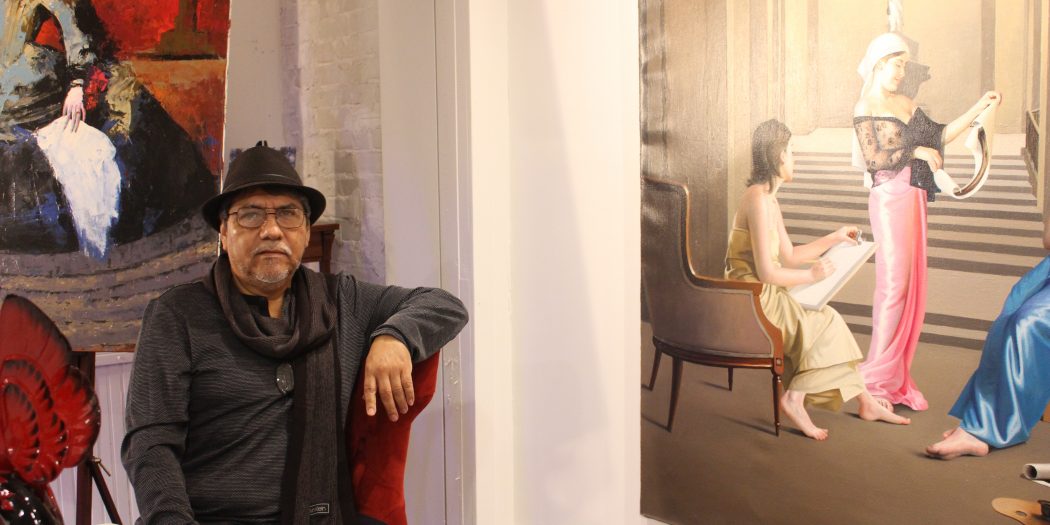 Self-taught Peruvian artist Benito Cerna presented a show titled “The Divine Feminine” at a local Micanopy art gallery, but he envisions much more than one exhibit. He hopes to create an artist haven within the town.

Gallery 118 is an art gallery and antique and furniture store in the heart of Micanopy located at 214 NE Cholokka Blvd. The event occurred Friday night and welcomed any and all into the historical building turned gallery space.

This is Cerna’s first exhibit in Micanopy, but he hopes it won’t be his last as he, along with the gallery owner and her team, aspire to establish a more permanent presence within the community.

Cerna hopes the exhibit exposes the local community to his work, so that they may recognize his name. Because of this, he shared his idea of creating a collection titled “Pintando Micanopy” or “Painting Micanopy” where his work and efforts will be easily identifiable.

Cerna envisions Micanopy becoming a hub attracting artists from all over the world to experience the magic of the town and the endless creative possibilities there. He described a gallery in Paris he works with that is located in a small town where renowned artists visit to teach and be taught, and he wants to try to cultivate that in Micanopy as well.

“You know all projects start from zero, and you have to work a lot,” Cerna said. “But, with the support we’ve received, I know we can achieve it.”

Fabiana Novillo Díaz is the owner of the gallery and organized the special event in honor of her good friend Cerna, who is now based in Weston. She is also an artist, who specializes in photography and collages using mixed media. Originally from Argentina, Novillo Díaz settled in Ocala and opened up her gallery in Micanopy because she fell in love with the historic, picturesque town.

“Micanopy has that magic,” Novillo Díaz said. “Argentina has a very similar place to Micanopy, and it makes me feel at home.”

The theme of the night titled “The Divine Feminine” is Cerna’s tribute to women. Hosting the event on Valentine’s Day made a great fit for a night meant to be about “love, friendship and the art of Benito Cerna,” according to Novillo Díaz.

Guests trickled in until there was a collective buzz of conversation and activity occupying the entire gallery. Several individuals were friends and local residents supporting the exhibit, and others stumbled in while walking along the streets of Micanopy.

Guests sipped on flutes of golden Champagne ushered around by Gustavo Vautier, Novillo Díaz’s husband, as they roamed around to view the various pieces lined along the white walls of the gallery. The exhibit featured a collection of paintings of females drawn in various locations and styles along with four completed paintings of Micanopy scenes. They also enjoyed live music from guitarist Raymond Lohengrin.

One guest who had not heard of the event, but became intrigued while passing it, was Andrew Harris. Upon learning about the theme of the event, Gainesville-resident Harris theorized the focus on women could mean that “God is a woman.”

Micanopy’s rich history is part of what drew in both Novillo Díaz and Cerna. The town will be celebrating its 200th anniversary in 2021. Like Novillo Díaz, Cerna highlighted a sense of magic present in the town that entices him to capture the scenes of Micanopy in his work.

“In Micanopy, there is something very special that is the structure and what is natural,” Cerna said. “And, that creates something magical.”

In collaboration with Gallery 118, Herlong Mansion Bed & Breakfast, located in Micanopy, and the UF Center for Latin American Studies joined forces to support the event because of the potential it has to invite more visitors to the area and to share the efforts of the Latin American community.

When asked about how the UF Center for Latin American Studies became involved in the event, Mary Risner, who is the associate director of outreach and business programs, credited the “power of social media.” A friend’s Facebook introduced her to the event, and she felt compelled to jump on a call with Novillo Díaz to discuss her goals and mission. From there, the center became a supporter of the event and hopes to collaborate on future events as well.

“We are an academic unit on campus,” she said. “But, we’re always trying to support community events as well to raise visibility and the awareness of Latin American and Latino culture.”

Toward the end of the evening, a raffle was held for one night at the Herlong Mansion Bed & Breakfast, who also sponsored the event, and in a stroke of luck, Vautier won — causing an uproar of laughter as Novillo Díaz jumped in excitement.

Farewell remarks promised more events, such as advanced master classes with Cerna and activities such as yoga in the gallery’s upstairs area. There are also plans in the works to create the Micanopy Arts and Business Council by the end of March.

Viviana is a reporter for WUFT News who can be reached by calling 352-392-6397 or emailing news@wuft.org.
Previous Gainesville Free Store Offers Clothes And Supplies To Those In Need
Next The Point, Feb. 17, 2020: UF Tells Professors To Stop Ordering Sick Students To Be Tested For Coronavirus