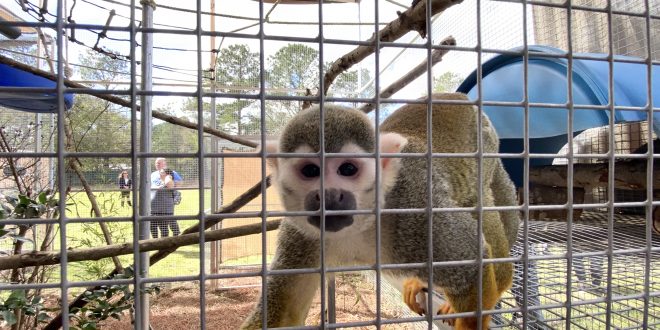 One of the 26 squirrel monkeys retired from FDA nicotine testing. (Lexi Flechner/WUFT News)

After four years of nicotine addiction studies, 26 male squirrel monkeys that were released by the Federal Drug Administration instead of being put to death found a new home in Gainesville at Jungle Friends Primate Sanctuary.

The FDA study, researching the behavioral and biological effects of nicotine, was heavily criticized after four monkeys died, due to complications during procedures. The FDA terminated the study in 2018 after the White Coat Waste Project, a lobbyist group that works to end animal testing in the United States, uncovered it through a Freedom of Information Act request.

The Arkansas-based study subjected the monkeys to isolation while wearing vests that would pump nicotine into their veins when they pressed a button. The study lasted four years before ultimately being shut down.

Kari Bagnall, the executive director and founder of Jungle Friends, said she was eager to welcome the monkeys because they were the first research monkeys to ever to be retired by the FDA.

Jungle Friends, which has been caring for monkeys since 1996, was chosen by the FDA because it was the only one suitable for the primates to live an “almost wild” life.

“Our goal is to build more of the indoor/outdoor facilities and have them already set up here so the next time we get a call we can get them out here immediately,” Bagnall said.

Each enclosure at Jungle Friends is custom-built for the specific species it will house. The separate enclosures hold three to four monkeys each, organized based on the behavior of the monkeys together, and have both indoor and outdoor components for them to choose to explore.

The ceremony welcomed those instrumental in the rehabilitation and care of these monkeys to celebrate the animal’s new home. Among the 30 people in attendance was Justin Goodman, vice president of the White Coat Waste Project.

He said all 26 monkeys “seem to be incredibly well-adjusted and I think that’s a great credit to the people at Jungle Friends and the care and time they’ve put into really helping them adjust to life outside of a laboratory,” Goodman said. “These monkeys have never seen the sky or felt the wind or touched the grass or climbed a tree so that was all new to them.”

Goodman worked on helping the monkeys get released after seeing video footage of the tests.

“It was kind of surreal to see them outside in these beautiful enclosures, out breathing the fresh air and climbing trees as opposed to the videos when I first saw them when they were hooked up to devices that were infusing nicotine into their veins,” Goodman said. “It’s a highlight of my life.”

Bri Fried, the sanctuary manager at Jungle Friends, oversees the care of all the animals at the sanctuary. She was instrumental in the rehabilitation of the FDA monkeys from the lab environment to their current almost wild enclosures.

“Getting to see them go outside for the first time and getting to use those wild instincts that they’re born with is a really great feeling,” Fried said.

Following the decision to release the monkeys, the FDA adopted a policy allowing for retirement of all animals involved in laboratory research.

“With the FDA’s decision and how smoothly it went getting the monkeys here, we are hoping it sets the standard,” Goodman said. “That’s why we pushed so hard to get the FDA to adopt a policy so we can see these happy endings again.”

All of the monkeys released from the study are between four and nine years old and they are expected to live to around 20 years of age at Jungle Friends, the average age for squirrel monkeys in the wild. The monkeys have so far showed no signs of long-term damage from the study.

“It’s like they’ve always been here,” Goodman said. “They’re acting like monkeys, they’re back to their wild nature.”

Alexandria is a reporter for WUFT News who can be reached by calling 352-392-6397 or emailing news@wuft.org.
Previous Alachua County Woman Traces Family History to Slavery
Next Gainesville Free Store Offers Clothes And Supplies To Those In Need