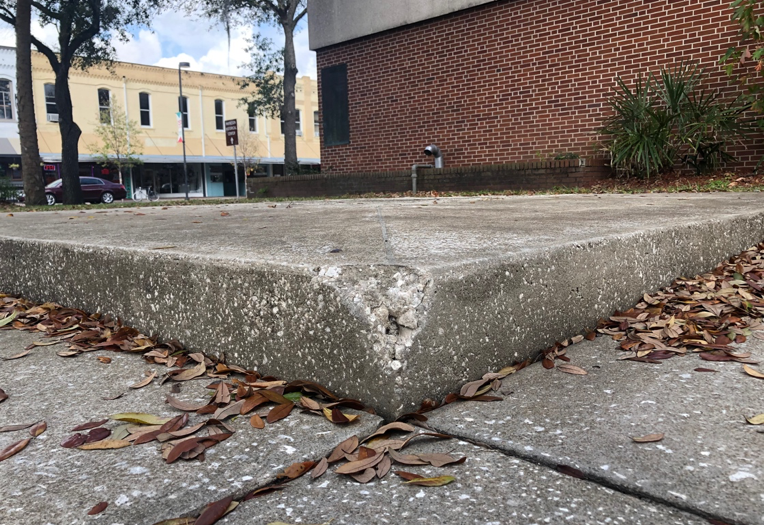 This 12-by-12 slab of concrete where the controversial statue of a Confederate soldier once stood outside the county administration building in downtown Gainesville remains empty. The county has put out a $40,000 call for artists to come up with a replacement artwork. (Steven Wolf/WUFT News)

Alachua County has once again called on artists to fill the gap a Confederate soldier statue’s removal left behind.

It’s been nearly two and a half years since the United Daughters of the Confederacy hauled away the controversial statue of Confederate soldier, Old Joe, from its mantle on the west lawn of the County Administration building on the corner of University Avenue and Main Street in Downtown Gainesville.

County commissioners voted to have the statue removed after growing pressure from the community, since many felt the statue represented white supremacy.

The purpose of the new artwork, which will be placed on the same 12-by-12-foot slab of concrete that Old Joe stood on for more than 100 years, is to “honor the shared values and aspirations of the community,” rather than a historical event or prominent figure, according to the county’s website.

The budget for the statue will be $40,000, with the money coming out of the county’s general fund.

According to Assistant County Manager Gina Peebles, shortly after the removal of the Confederate statue, the county first made a call-to-artists for a replacement statue, with the county offering to pay $25,000. It received no proposals, a shortage that officials believed resulted from the asking price. County commissioners have now agreed to increase the offer to $40,000.

Usually, a call-to-artists by the county is put on Callforentry.org, or CaFÈ, a software that connects state organizations with artists who can then submit their proposals online for a particular project. According to Peebles, however, the county decided against putting their first proposal on CaFÈ, due to the fee included.

Nearly six months later, Alachua County has now put out a second call-to-artists to create a statue on the West Lawn of the County Administration building. According to Peebles, this call has not been posted on CaFÈ either, but the county may pay the fee depending on the quantity and quality of the proposals submitted by the deadline.

Artists will have until Feb. 26 to submit their proposals for a new statue that’ll reflect, “The peace, love and justice that will prevail in Alachua County,” according to the county’s website.

What precisely this new statue will depict is up to the artist. The Alachua County Arts Council will select their top three candidates. The county commissioners will choose the winner.

Usually, the money for art projects like these comes out of the county’s bed tax, which visitors pay when they stay overnight in Alachua County. However, that will not be the case for this statue, as officials don’t expect it to draw people from other counties.

In recent years, the county has made it more of an objective to incorporate the arts into everyday life. This is evident in the hiring of Alachua’s first poet laureate, E. Stanley Richardson, the several murals around Downtown Gainesville and most recently, this statue replacement effort.

“The county commission has demonstrated firmly that in their view, art is an essential part of our society and they’re very supportive of it,” county spokesman Mark Sexton said. “Clearly, the county commission thinks it is a worthwhile project and that it enhances this county as a place to live.”

“We want Alachua County to be a really cool place, not only for the folks that are visiting, but for people who live here, too,” Sexton said.

The plan is for the new statue to be completed by late summer or early fall.

“I’m hoping that generations from now, people can look back and see that beautiful piece of work on a prominent intersection in Alachua County and reflect back on its story knowing there was a lot of thought put into it,” Peebles said. “I want people to enjoy this piece and understand that it’s history.”

Steven is a reporter for WUFT News who can be reached by calling 352-392-6397 or emailing news@wuft.org.
Previous Alachua County To Make First Appearance In Global City Nature Challenge
Next The Point, Feb. 14, 2020: Florida Legislature Looks At Statewide Regulation Of Vape Shops