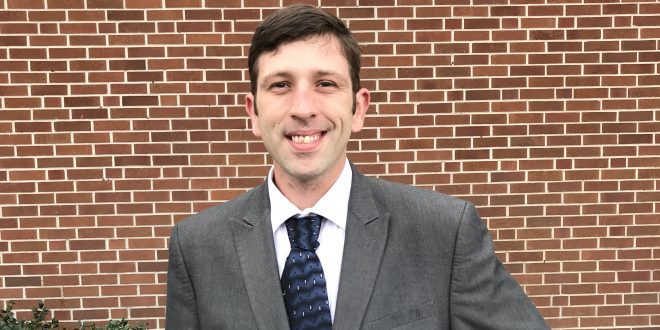 “I am a homeowner, father, and veteran. These interests will help me form a cohesive citizen perspective and help review the County Charter for the benefit of Alachua County citizens,” Klein wrote in his application to the Charter Commission. (Jourdan Davis/WUFT News)

The Alachua County Commissioners on Tuesday appointed a new member to the charter review commission, replacing a disgruntled one who resigned abruptly.

Nicholas Klein, 36, of High Springs, and the chairman of the county’s veterans service advisory board, emerged as the county commission’s choice from a pool of 15 candidates.

He succeeds Eric Drummond, 42, who sent a resignation letter to the inboxes of the charter review commission members on Jan. 31, two days after its most recent meeting.

Drummond was on the short end of a 9-2 vote in favor of dismissing a proposal to have single-member district representation make its way onto the general election ballot in November.

“People care about this, and if we’re going to turn it off because of politics, shame on us,” he told the review commission members immediately preceding the vote. Leaving before the meeting ended, he also told them, “You guys can talk about the other topics that just don’t matter here.”

In his resignation letter, Drummond wrote, “It is evident to me that this commission is more interested in a certain politically oriented outcome rather than an honest search for topics that the public may be interested in seeing on the ballot.”

Drummond did not reply to repeated attempts by WUFT News to reach him for comment.

Another review commission member, Scott Camil, of Micanopy, said Drummond’s letter did not surprise him. Camil said Drummond joined the commission to advocate for two specific issues: term limits and single-member district representation. The commission has rejected both ideas.

“It was obvious to me that he did not seem comfortable with the group of people” on the review commission, Camil said of Drummond. Camil added, “You could see from the voting process that he was not on the same page as the rest of us.”

Chairwoman Penny Wheat said the resignation would not keep the review commission from doing its work – and deciding by March 31 which changes to propose for the county charter.

“As a former county commissioner who served almost 12 years as a minority member, I understand the frustration inherent in working to make your voice heard,” Wheat told WUFT in an email. “It is always unfortunate when a member leaves, because we need everyone’s voice.”

The review commission will hold its next meeting at 5:30 p.m. today at the Alachua County Administration Building with Klein as a member.

He earned a bachelor’s degree in international studies and political science from St. Leo University and served years in the Army as an intelligence analyst.

Klein said he wanted to join the review commission because “surrounding areas in Alachua County are sometimes forgotten – and I think it’s important to have somebody who knows Gainesville, knows High Springs, knows the surrounding areas and can speak for everybody.”

Commission Chairman Robert Hutchinson and Commissioner Ken Cornell first supported other candidates: William Connellan of Gainesville and Jessica Mrozinske of Newberry, respectively. Hutchinson and Cornell then offered their support for Klein in a second vote.

Jourdan is a reporter for WUFT News who can be reached by calling 352-392-6397 or emailing news@wuft.org.
Previous Senators Cautiously Move Forward With Athlete Pay
Next Florida Government Employees Learn Security Tips At Ocala Workshop Amid Rise In Cyberattacks