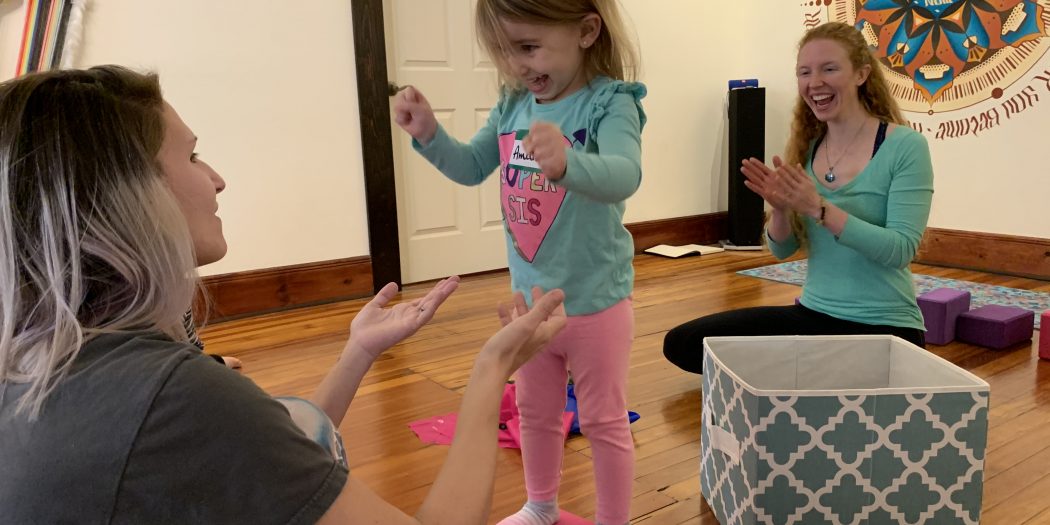 Amelia Burbage, 2, excitedly interacts with her mother during the playtime section of the Kids Yoga & Signing class at the House of Waking Life, 109 SE Fourth Ave. Yoga teacher Kori Brooks claps from the front of the studio space.

On Thursday mornings, the aroma of essential oils and incense wafts through the air as kids raise their arms and point their index fingers to the sky.

“Now, bend your arms and straighten them, as if you’re poking tiny holes in the sky,” yoga instructor Kori Brooks said. “This is the sign for ‘stars.’”

At the House of Waking Life in downtown Gainesville, Brooks teaches children ages 2 to 6 sign language, while they’re doing yoga. The studio, which opened on Jan. 28 offers family signing and yoga classes to help toddlers communicate with their parents. For younger kids, the class is an opportunity for them to get a head start in becoming bilingual.

Brooks, a 29-year-old yoga teacher who has taught for three years, started learning American Sign Language after she gave birth to her hearing daughter, Forest.

Brooks was intrigued to explore ASL with Forest. She found that Forest didn’t use the signs she taught her at the beginning but started signing back to her mom a few months later. Brooks said that her daughter’s ability to communicate by signing has prevented temper tantrums, too.

“Learning ASL was a way for me to communicate with Forest before she learned how to talk,” Brooks said. “I love that through learning together, both of us can communicate with people who are deaf or hard of hearing.”

Her now 2-year-old is fluent in ASL and was the main inspiration for Brooks’ idea to combine yoga and ASL.

Co-owner of House of Waking Life, Brooke Rosen, 29, prefers the title “dream steward.” She has always dreamt of a place where art and community come together in harmony. After eight months of renovating a 112-year-old home, Rosen and her fellow dream steward Caleb Radduge, 34, have brought that dream to life.

Part of Rosen’s vision is to keep the space comfortable and welcoming for creatives of all ages and walks of life. When Brooks approached Rosen about her idea to start the “Kids Yoga & Signs” class, she was ecstatic.

“I’ve heard that teaching babies sign language is helpful in communicating with them, and what better way to teach her than while doing yoga?” Burbage said, while watching Amelia play with a navy-blue Tibetan singing bowl.

Though Amelia doesn’t know the impact she could have on someone who’s deaf or hard of hearing, Zulma Santiago Zayas, an ASL and deaf studies lecturer at the University of Florida, said she is touched to know that hearing people are interested in learning, too.

“In the past, hearing and deaf people tend to be separate and isolated,” Santiago Zayas said. “So, I am thrilled to see that hearing people want to learn ASL to be able to communicate with the deaf community.”

In addition to bridging the gap between hearing people and those who are deaf or hard of hearing, the University of Hertfordshire published a study in 2013 which concluded that gesture is “inexplicably linked to language development.”

The House of Waking Life is excited to be a place where kids and parents can develop both physically and linguistically.

“Our goal was to take a seemingly ordinary house and create a space where dreamers and doers can learn and explore their infinite selves,” Rosen said.

With novel features like a wooden outdoor meditation maze, performance space, and soon-to-come tea and kombucha bar, the House of Waking Life serves as a peaceful retreat, perfect for practicing mindfulness in the heart of downtown Gainesville.

“I love that we’ve created a place for people to learn and flourish,” Rosen said. “Having people of all ages participating and connecting here is so rewarding.”

The House of Waking Life will continue to offer weekly “Kids Yoga & Signs” classes for $12 per parent and child pair and $2 per additional child, as well as a handful of other classes for adults such as mindful movement and community stillness meditation. Participants can register for classes online at https://intothehowl.com/.

Cayela is a reporter for WUFT News who can be reached by calling 352-392-6397 or emailing news@wuft.org.
Previous Feb. 12, 2020: Morning News In 90
Next House Seeks Regulation Of Vape Shops Amid ‘Epidemic’

The enfant terrible of Gainesville, how Tom Miller is shaping the underground art scene

He needs no one's approval. The Gainesville-based artist often makes lookers-on question if he's goofing off or making serious art.