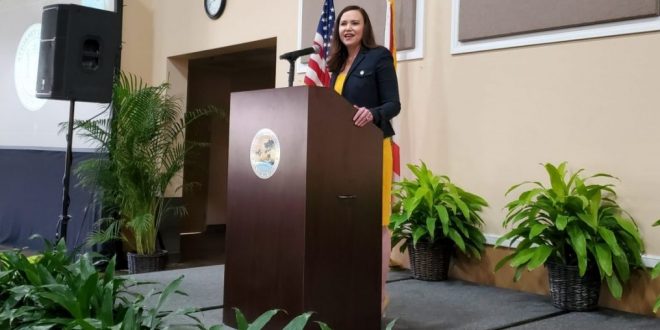 Attorney General Ashley Moody gives a keynote speech at a cybersecurity workshop in Ocala. The workshop was hosted Tuesday by Marion County and the Florida Center for Cybersecurity. (Cameron Rivera/WUFT News)

OCALA — Attorney General Ashley Moody vowed at a cybersecurity workshop Tuesday afternoon to be proactive and aggressive against cybercriminals.

Cyberattacks have been on the rise in Florida cities. In 2019, Lake City, Riviera Beach and Key Biscayne were among those hit with ransomware, which encrypts the data on a network, making it inaccessible. Hackers will demand a ransom of hundreds of thousands of dollars, usually in bitcoin, to fix the problem.

In her speech, the attorney general read off headlines about cities that have been hacked or have paid ransom for cyberattacks.

The attorney general was a keynote speaker at the free workshop, which was hosted by Marion County and the Florida Center for Cybersecurity, or Cyber Florida. About 115 attended the non-technical workshop intended for government leaders and employees. It was also open to the public.

One of Cyber Florida’s goals in these workshops is to encourage municipalities to act preemptively to prevent security risks by educating them on different types of cyberattacks and warning signs for them.

“Cybercriminals are very savvy, and they’re targeting people instead of machines because people are easier to manipulate,” said Kate Whitaker, spokeswoman for Cyber Florida.

Cyber Florida is a state-funded organization established in 2014. The organization aims to inform citizens on cybersecurity through outreach and workshops. Cyber Florida also works with all 12 state universities by funding research, building partnerships and developing programs to strengthen cybersecurity. The organization has been hosting workshops for citizens and small businesses since 2018 but has decided this year to include more workshops intended for government officials. This was the fourth workshop of that kind, following ones in Tampa, Fort Lauderdale and Jacksonville.

Linda Schwambach works in information technology, lives in Ocala and said she was interested in finding out more about today’s biggest cyber threats. She believes workshops and conferences can go a long way to help prevent attacks and that it is especially important for government leaders to stay informed.

“It’s absolutely necessary for the public’s data to be safeguarded,” Schwambach said.

The workshop identified types of threats, went over the best safety practices, informed attendees of what to do during a cyber attack and provided scenario-based activities.

There are many options to prepare for the possibility of cyberattacks. The best way to protect against ransomware, for example, is to have all data backed up. In the event of an attack where data is encrypted, the backups will often make the difference between having to pay high ransoms or not. On that note, Cyber Florida encouraged cities to not pay ransom, citing that it sends a message to other cybercriminals to also ask for money and does not guarantee a return of the data breached.

Another option is for cities to purchase cyber insurance. While an option, Cyber Florida warned that cyber insurance is not a comprehensive solution, it can provide a false sense of security and premiums can be expensive.

Alfred Saikali is the chair of privacy and data security at Shook, Hardy & Bacon L.L.P. According to Saikali, the smallest cities are the most vulnerable to attacks from cybercriminals because they do not have the resources to allocate toward preventative measures. Saikali, who is based in Miami and did not attend the workshop, disagrees with one thing.

“The number one thing municipalities should be doing is purchasing cyber insurance,” he said. “Every city has a vulnerability.”

Lainie Claudio is the assistant property appraiser in Marion County and attended the workshop. She believes counties and municipalities that hold workshops like Cyber Florida’s are providing an advantage to their communities.

“I think today we took away many benefits and many tips to continue to look at our security systems and put in effective actions,” Claudio said.

Cyber Florida’s next workshop will be Thursday in Tallahassee. It is also intended for government officials.

Cameron is a reporter for WUFT News who can be reached by calling 352-392-6397 or emailing news@wuft.org.
Previous High Springs Resident Selected As New Charter Review Commission Member
Next The Point, Feb. 12, 2020: Why The Florida Boxing Commission Lifted Its Ban On Elbow Strikes In Sanctioned Matches

These Were The Bills Of Note That We Covered During Florida’s 2021 Session. Here’s What Happened To Each

Some mayors, particularly those aligned with the Democratic Party, decried Republican-led preemptions as a power grab against local government's ability to control a potential resurgence of the coronavirus but also restrict their ability to respond to future public health emergencies.