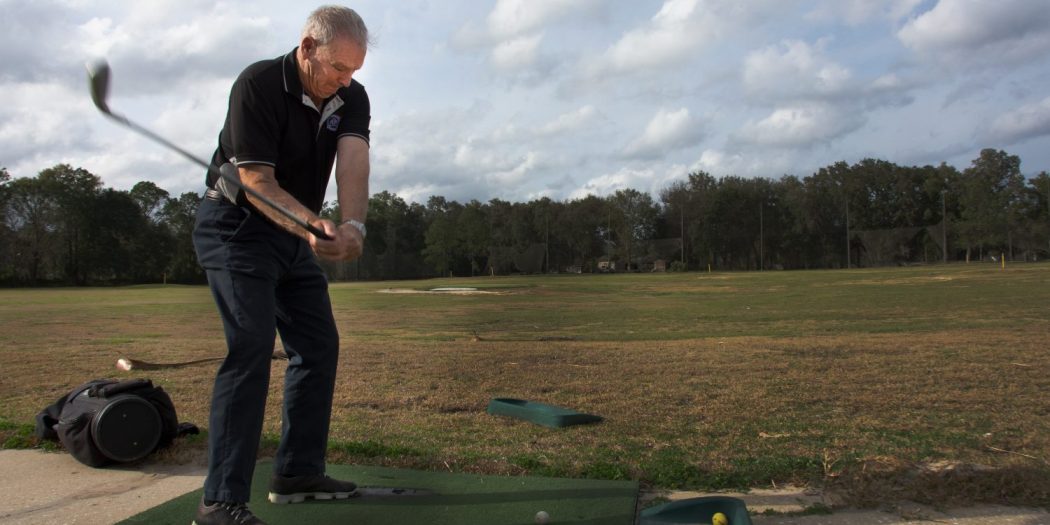 John Stevens, chairman of the Gator Junior Golf Association, hits a ball at the now closed West End Golf Course driving range. People now come out regularly to hit the balls that were left behind on the range. (Sam Schaffer/WUFT News)

Survey crews and drones at West End Golf Course have caused a stir in the neighboring communities.

The course closed in December and left many in the area wondering what will happen with the land, or rather, what had already happened. Some course members didn’t know it was closed until they showed up to golf.

Phyllis Saarinen, a retired water policy consultant and former president of the West End Master Maintenance board noticed a survey crew working on the land Wednesday morning. She said they also appeared to be doing an aerial survey with a drone. Many of the trees on the course have shiny metal tags on them.

She said the surveyors did not know who the client was.

Saarinen this month wrote the Alachua County Commission to find out what’s going on.

“We have not received an application for anything,” said Alachua County spokesman Mark Sexton, adding that there hasn’t been any discussion on it for over a year.

“I’m feeling very anxious about what’s possibly going in there,” Saarinen said. “There’s what I consider a very unsightly project of two-story town homes going up just across the fairway from where I live.”

The townhomes are part of a planned development which includes the golf course, said Jerry Brewington, the senior planner for the Alachua County Department of Growth Management. The plan was approved in 1981 and must be adhered to by anyone wishing to develop on the land, which currently zones the golf course as its required recreational component.

The designation means that whatever replaces the golf course must be designed for community use such as a public pool, park or trail, Brewington said.

As of Thursday morning, the department of growth management has not received any land use change proposals.

Peter Min is the chief operations officer of West End Golf Course Inc., the company that owns and operates the golf course.

“We are currently under contract,” Min said. When asked what the buyer plans to do with the land, he said “they’ll probably develop on it.”

He wouldn’t say who is buying the land or for how much, but the Alachua County property appraiser assessed the property value in 2019 at $381,938.

Though it may be closed, threads from the years of community enjoyment fostered by the West End Golf Course aren’t entirely gone. On an average day, golfers on the driving range navigate the debris, spilled trashcans and overgrown greenery to hit and retrieve balls, which are left out again for the next person.

John Stevens is chairman of the board and a lead golf instructor for the Gator Junior Golf Association. He remembers a more vibrant era at the West End Golf Course when he led golf lessons to hundreds of kids.

On any given day there could be league practice, youth practice, big and small tournaments alike. Groups of highly skilled golfers would partake in gambling games they called “the shoot out,” Stevens said.

While the course was geared towards more inexperienced golfers, the gambling crew took their games seriously.

“You’d lose the shirt off your back,” Stevens said while explaining why he stopped gambling on himself. His swing was prettier back in the day.

Saarinen, also an avid golfer, played the course for years before it closed. It influenced her decision to buy a house in the surrounding neighborhood.

“It was a wonderful scene from my sunroom,” Saarinen said. “In fact, it really was the reason why I bought this unit.”

Sam is a reporter for WUFT News who can be reached by calling 352-392-6397 or emailing news@wuft.org.
Previous By The Numbers: Florida Voters
Next Changeville Brings Together Artists And Activists To Collaborate For Social Change