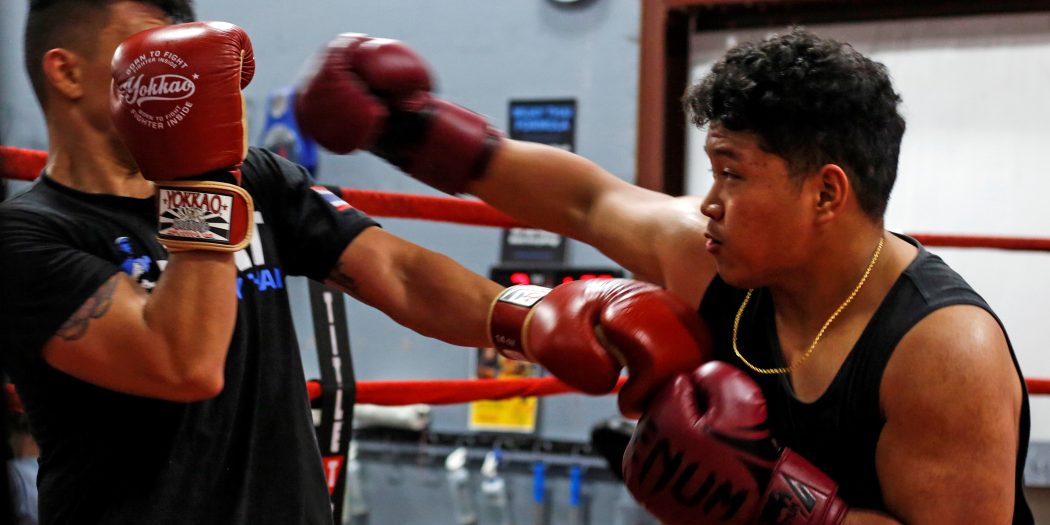 The heavy thud of punches and kicks smacking punching bags could be heard through the walls of a gym for Muay Thai, a martial arts fighting style from Thailand.

Inside, groups of children smaller than the dangling bags practiced their kicks. Two men circled in the boxing ring. It was a typical weeknight at Giles Wiley’s gym. With decades of experience in fighting, the sport Wiley loves is Muay Thai – distinguished from traditional boxing because fighters can use elbows and knees to strike devastating blows.

But Florida’s regulations for Muay Thai have long frustrated Wiley, metaphorically tying the hands of its fighters: The Florida Boxing Commission does not allow amateur fighters here to use elbows in matches. The strong, thick ulna – the bone in the forearm – functions like a hammer in the ring.

“Most other states allow them and have allowed them for a long time, so we’ve got quite a few guys who we can’t really get fights here in Florida because they’re at a higher level now,” Wiley said. Fighters seeking a more authentic experience compete in other states: “We want real Muay Thai, so we travel outside of Florida,” he said.

The boxing commission for nearly two years has considered relaxing the ban. The conversation started after an email in August 2018 to regulators from Jeff Santella of Cape Coral, Florida, and the commission now says it has agreed to allow elbow strikes in sanctioned matches.

The new proposal is making its way through the rulemaking process. It requires a change to Florida’s administrative code. Once finalized, it will specify that striking with the elbow to any target is not a foul for amateur Muay Thai fighters who are at least 18 years old.

Santella, the Florida director of the World Boxing Council Muay Thai, said the old rule was akin to allowing a player in Little League Baseball to play every part of the sport except to use a bat.

Fighters in Muay Thai, the national sport of Thailand, use fists, elbows, knees and legs to strike opponents. The sport is growing in popularity and advocates are working to include it in future Olympics.

Dr. Andrea Hill of Monroe, Georgia, is a ringside physician and the widow of a Muay Thai fighter who killed himself in 2016 from what Hill said was chronic traumatic encephalopathy caused by repeated blows to the head. She said the elbow is a solid surface with the potential to carry a significant amount of force. She likened it to being hit with a rock.

“It is really generally known, especially in Muay Thai, that the elbow is about the most dangerous thing to get hit with for those reasons,” said Hill, who also trains as a fighter and is certified as a ringside physician. “When you throw an elbow, you throw it different ways. Knees only get thrown a certain number of ways, kicks are only a certain number of kicks. But with an elbow, you’ve got all kinds of positions you can strike with the elbow.”

Santella said the change in Florida will allow the amateur matches to resemble professional ones more closely. State officials are still deciding details, such as required pads worn by fighters and training required for judges and referees.

“The authentic coaches, they’re called Krus, I’m sure, cringe every time they see something called Muay Thai without elbows,” Santella said. “That’s like a bicycle having one wheel instead of two. It’s an oxymoron there.”

Other states that allow padded elbow strikes, including Texas, California and Arizona consider it “safer for amateur fighters to have elbow experience prior to becoming a professional,” Santella wrote in his email to the boxing commission.

“The current Florida policies have an amateur fighting one weekend and jump into a pro fight with bare elbows the next. This reckless transition has been declared not just dangerous but deadly in the world fight community,” Santella wrote.

As elbow strikes are legalized for amateurs, it doesn’t necessarily mean they will be thrown more often in matches, Santella said.

“Even with padded elbows, they’re not thrown very much. It’s not that easy,” he said. “People thought once they allow elbows, everyone is going to get split and it’ll be too much damage to the competitor, which doesn’t happen, has never happened.”

Austin Amell, an amateur fighter out of Jacksonville Muay Thai, has been training in the martial art for over four years and represented the United States at the International Federation of Muay Thai Associations’ 2019 World Championships in Bangkok.

Amell said fighting in Florida without elbows has made it more likely for him to be caught off guard when he is fighting in states and countries which do allow them. He isn’t always used to his opponents having the freedom to use these strikes.

He is ready for the rule change, he said. It’ll give him another weapon to use in the ring.

Though he said he has avoided most elbow strikes, he remembered one in particular.

“There is one elbow I can think of where a kid hit with me a spinning elbow, clean on the chin. I was actually shocked I didn’t get knocked out. They’re very hard. It’s like getting hit with a real heavy bone,” he said.

A main concern with elbow strikes are the cuts to the face they can cause.

“In my opinion, that’s not nearly the most dangerous thing that’s happening in a Muay Thai fight,” he said.

“Having elbows will hopefully influence us to have more traditional, more complete Muay Thai here in Florida and it will start to bring the level of competition up here. We have good boxing and we have good MMA, we just don’t have good Muay Thai,” Amell said.

Organizers of the International Kickboxing Federation World Classic, an annual amateur tournament, considered pulling out of Florida over the restricted rules. Fighters from California, where they were allowed to use elbows, couldn’t do so when the fights were in Florida, said Steve Fossum, CEO of International Fight Sports.

“That’s a great move for Florida moving forward to try to build Muay Thai-style fighting in Florida because I get a lot of complaints from people in Florida saying, ‘When can we do full rules here?’” he said.

Wiley said the rule change will more closely link the sport in Florida to its Thai heritage. Wiley and his gym members have traveled six times to Thailand as a group to experience Thai culture and explore the sport’s origin.

This story was produced by Fresh Take Florida, a news service of the University of Florida College of Journalism and Communications. The reporter can be reached at adimichele@freshtakeflorida.com.