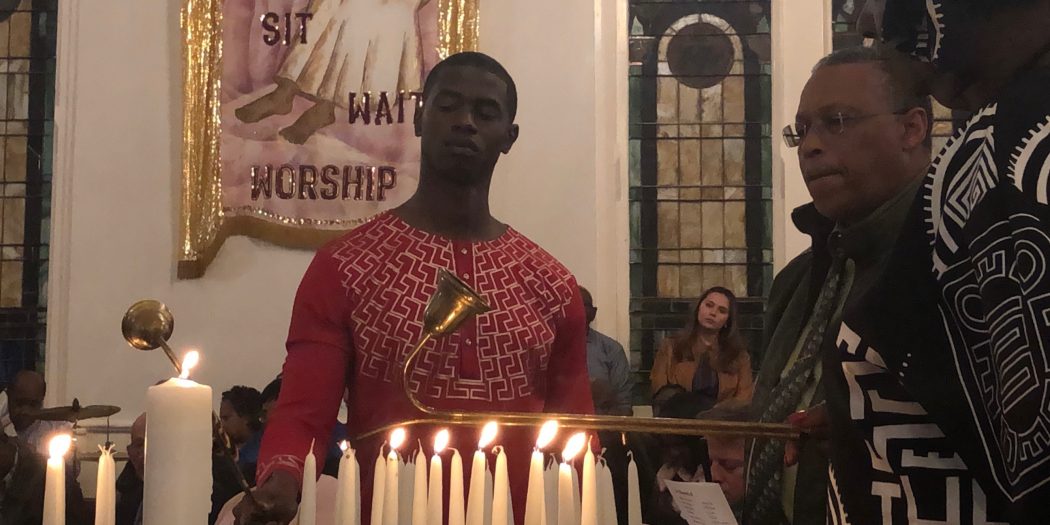 The flames flickered at a memorial service for the 46 recorded cases of people being lynched in the county between just after the Civil War and just before the Great Depression.

One candle represented Henry Hinson, who was lynched on Jan. 12, 1892, in the Micanopy town square. An overflow church audience of more than 150 witnessed Yvonne Hayes Hinson, 72, say she was speaking his name for the first time ever. It had taken her three decades to reckon with her husband’s grandfather’s violent end. Her son was named in Henry Hinson’s honor.

“Whether or not the community wants to deal with it, they must,” said Hinson, a Democrat vying in the primary election in August to represent District 20 in the state House. “As did I.”

The event was one of the first acts held as part of the county government’s 10-step Truth and Reconciliation initiative. Other community events at which residents can share their account on how Alachua County’s dark past affects their family history are planned.

Rev. Karl Smith, the pastor at Mount Pleasant United Methodist Church of Gainesville, said at the service that the community must come together to both reclaim its past and ensure that everyone is treated equally moving forward.

“We will work together to realize the dream of Dr. Martin Luther King that one day all of God’s people – black men and white men, Jews and gentiles – will stand together with the chorus declaring ‘Free at last,’” Smith said.

The pastor said the continuing struggle for equal access to high paying jobs and affordable housing are remnants of a racist system that allowed for lynchings and that must be rooted out.

“In order to move from bitter to better, we must take some time to reflect on the injustices that have been imposed upon people of color and forever keep them in our memories,” Smith said. “They paid the ultimate price so that you and I can be here together tonight.”

Alachua County has the highest number of reported extrajudicial lynchings in the state, followed by Orange and Marion Counties. The total comes after the Alachua County Historical Commission in January 2018 more than doubled the reported lynching cases between 1867 and 1926. Forty-three of the county’s victims were African-American. Historians believe there are likely many more such cases in the county that have not yet been uncovered.

At the end of its 10-step process, the county aims to request official recognition from the Equal Justice Initiative’s Community Remembrance Project at the National Memorial for Peace and Justice in Montgomery, Alabama.

The national memorial, opened April 2018, features 805 steel rectangles that list the hundreds of names of those who were lynched without a trial. To earn a place from EJI, a community must show how it is going about discovering and repairing the societal damage caused by lynching. Both Marion County and Orange County have markers at the national memorial.

At Mount Pleasant, Stan Richardson, Alachua County’s first poet laureate, recited two poems done for the service: “Century Oak: A Conversation With a Tree” and “A Eulogy for Black Bodies.”

From the eulogy poem, he said: “Dangling black bodies / Suspended in atrocity / Swaying in the breeze of white supremacy / You reveled in our terror.”

Smith told WUFT News the inspiration for his work came from calling to his ancestors in prayer.

“Sitting up there and looking out at the audience and seeing all of the people together, different ethnicities, different shades, gives me hope,” he after the service.

One of the service’s organizers, Nkwanda Jah, executive director of the Cultural Arts Coalition of Gainesville, sat in the pews holding hands and singing with her fellow community members.

Although she believed the service was a step in the right direction under the truth and reconciliation initiative, Jah said there is so much more to be done beyond special programming.

“The service was just a kick-off; this is the first attempt for our community to heal,” she said. “The work comes now.”

Correction appended: A previous version of this story incorrectly stated the name of the church at which the service took place. The church is Mount Pleasant United Methodist Church.

Ana is a reporter for WUFT News who can be reached by calling 352-392-6397 or emailing news@wuft.org.
Previous Coalition Takes Aim At Top Oliva Priority
Next ‘What We Are Celebrating Is A Revolution’: Exhibit Honors 19th Amendment Centennial