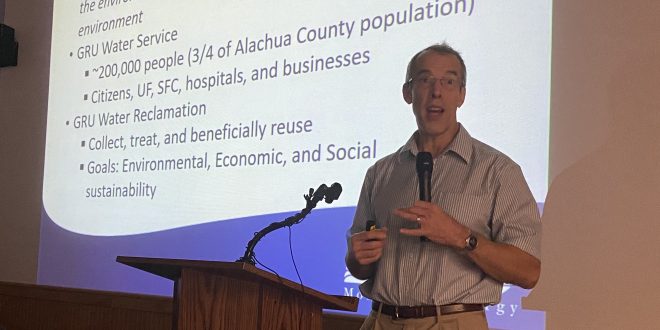 They expressed concern about the Floridan aquifer, natural springs, the Santa Fe River and the potential damaging effects that low water-levels could have on Alachua County.

Fifty people attended a discussion titled “Water: What Is It Good For?” that featured five panelists with varied environmental experience. The Alachua County Environmental Protection Advisory Committee hosted the event at the Millhopper Library in Gainesville.

When the springs struggle, the connected aquifer struggles, which leads to a domino effect on critical wildlife, aquatic vegetation and agriculture, not to mention a decrease in tourism.

“The springs are kind of like the canary in a coal mine for us,” said Stephen Hofstetter, the advisory committee’s staff liaison. “Not only are they important economically and for tourism, but they’re a vital historical aspect for this community as well.”

Hofstetter said the committee hoped the event would help educate citizens who want to understand more about water issues in the county and north central Florida.

One way the city conserves water is by reusing it, Hutton said, adding that the utility has 1,200 customers who receive reclaimed water service used for irrigation instead of well water.

Another way the city works to improve water quality is by creating wetlands such as Sweetwater Wetlands Park, Hutton said. The man-made park filters out pollution and nutrients, benefiting the environment. It has helped to restore natural water flow to wetlands in Paynes Prairie Preserve State Park and improve the water quality in the Alachua Sink and the Floridan aquifer, he said.

During a Q&A with the audience, most of the questions were on water quantity as well as quality, and how a person or organization gets a water permit for a well to pump their own water.

Mirti said the threshold for a consumptive use permit in the Suwannee River Water Management District is 100,000 gallons per day for 1,000 people. Below this, there’s no need for a permit. One could get a 6-inch well and pump 99,999 gallons per day for free.

Bruce Blackwell, 78, a member of the Gainesville City Beautification Board, said he wanted to hear more about what can and should be done about the water resources.

Bettina Moser, 58, an advisory committee member and a biologist at UF, said “I’m dismayed, disenchanted and frustrated that in topics such as today, biology falls short.”

All in all, Moser said, however, the discussion was very informative and she particularly liked Knight’s response to a question about how people can conserve more water. He told them to minimize the use of irrigation systems on their lawns and to not fertilize outside plants.

“The other main thing we need to do is speak with a unified voice,” Knight said. “If we want to see a paradigm shift in the state, we want to protect our waters and that is not possible under the current political system. You need to get involved politically as well as individually.”

Emily is a reporter for WUFT News who can be reached by calling 352-392-6397 or emailing news@wuft.org.
Previous Newberry Becomes First Alachua County High School To Reach 100% Graduation Rate
Next Alachua County To Host Truth And Reconciliation Events Remembering Lynching Victims