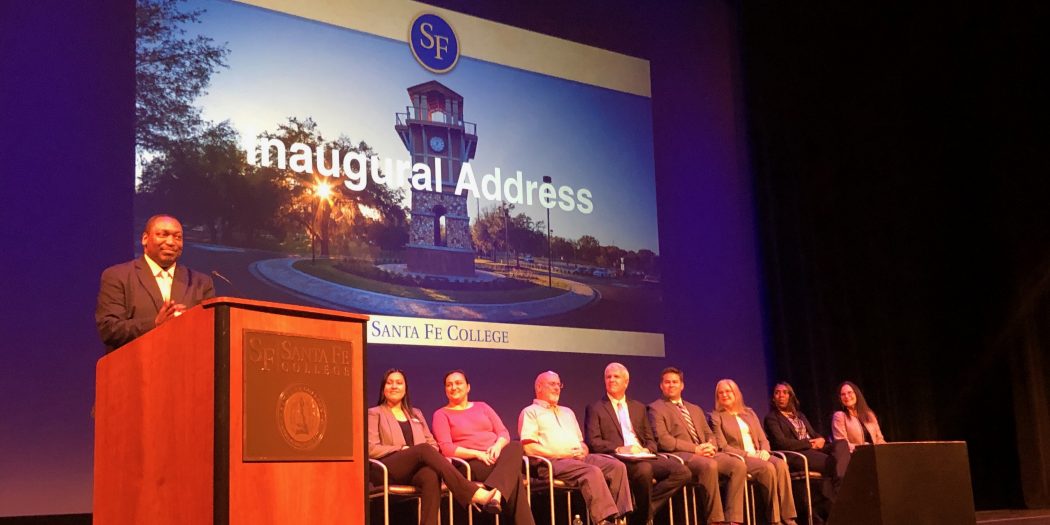 “Gaps and trends in academic performance among groups will be examined and initiatives developed,” Broadie told an audience of over 600 people gathered at the college. “Challenges faced by our citizens in East Gainesville will be addressed and turned into opportunities.”

Broadie, however, promised to spend his first 100 days as president listening and learning before leading Santa Fe to what he expects will be significant changes.

“No great institution or business has become greater by coloring within the lines,” he said. “Our institution of higher learning will color outside the lines, create new masterpieces and a trail for others to follow. We will dream big. We will achieve.”

Broadie said he was excited to pursue the new Blunt Campus in downtown Gainesville.

“The delivery of academic programs and the delivery of training programs there will be something that will help individuals uplift themselves out of poverty,” he said.

Broadie delivered his address in the college’s Jackson N. Sasser Fine Arts Hall, which was recently renamed in honor of his predecessor, whose retirement took effect Feb. 1. The speech was a mix of looking forward to a hopeful future and celebrating Santa Fe’s past successes.

The 2015 Aspen Award that recognized Santa Fe as the nation’s best community college was on display as Broadie spoke. He said he was dedicated to having the college receive it again.

The college’s faculty senate president, David Price, said the biggest problem he hopes Broadie will focus on is the unequal compensation among staff, especially part-time faculty.

“Right now, there is a salary study that is being conducted and I do have plans to look into that,” Broadie said when asked by WUFT News about the issue after the event. “It will be part of my first 100 days of listening, learning and leading.”

Student body president Kate Santacruz, 21, is studying business administration and said she has already gotten to know Broadie through the forums he has attended prior to his first day as president on Friday.

“Once I met him, everything clicked,” Santacruz said.

Most students are optimistic about Broadie’s presidency, said Santacruz, with the only concern she had heard being any loss of student input on key college matters.

The student body president said Broadie addressed that worry in his address.

“One of the things he kept on mentioning was continuing our culture of shared governance; that to me is the most important thing,” she said. “Having our three bodies – the college senate, the career service council and the student body – work together and grow stronger is crucial to success.”

Nursing student and Jacksonville native Dajhia Preston, 19, attended the event and said she is excited to see the new president grow into his role.

“It seems like he really wants to be here and that he really cares,” Preston said.

Broadie is the fifth president in Santa Fe’s 54-year existence and he referred multiple times to upholding the fourth one’s legacy during his address. Sasser had been president since 2001.

Price said he wants Broadie to embody many of Sasser’s traits, but hopes the new president will be more transparent, especially in regard to a direct bargaining approach with the final budget.

Sasser said of Broadie during his final convocation on Jan. 3, “He is well-credentialed, he has a rich experience in higher education and already has a passion for this work.”

While he is experienced as a college president, he is new to Florida and will have to build relationships with the state legislature, which is responsible for providing funding for the college.

Brodie said he looks forward to fostering such relationships doing in his first 100 days, even as he continues to urge Santa Fe students to “dream big” to achieve their goals.

“Never stop learning,” he told them during his address.

Lauren is a reporter for WUFT News who can be reached by calling 352-392-6397 or emailing news@wuft.org.
Previous Child Sex Abuse Survivors Seek To End Statute Of Limitations
Next The Point, Feb. 5, 2020: Florida Justices Question Proposed Assault Weapons Ban Language