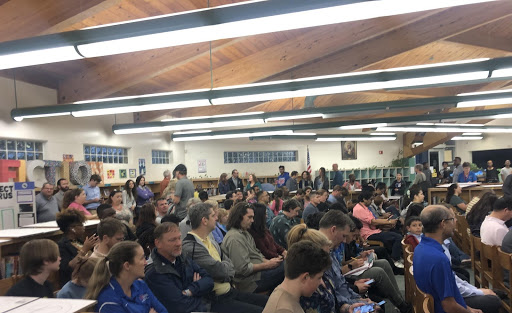 (Below: Listen to a version of this story that aired on WUFT-FM.)

Students in the ExploraVision Program at Howard Bishop Middle School celebrated their finished projects with an awards ceremony Tuesday night.

ExploraVision is a national program requiring students to brainstorm innovations that may be able to fix issues within science.

The Howard Bishop chapter of this program integrates scientific solutions, but it also emphasizes teamwork by having students collaborate with University of Florida professors, professional scientists and mentors on these issues.

Projects featured at the ceremony included one about guns that would turn off in school zones to promote safe firearms, and an app that tells boaters when they are about to encounter algae and encourages them to pick it up.

Essentially, this program is nothing like a normal science fair. The elaborate projects resemble at least high school level work, if not higher. And some of these innovations could even be applied to solve real world issues.

However, students do not do these things all on their own.

Tonya Camaratta, the ExploraVision program director and science teacher, said the mentors are an important part of this program.

“We’ve invested the community in our school. And that’s something these kids may not have experienced before. Having this role model who is there consistently every week, who is patient, who guides them and who helps them work up to the best of their ability.”

While students come up with ideas and present solutions to these problems on their own, others help them in the execution of their projects.

The ideas are mostly their own, they are simply tweaked and edited by the mentors that they work with.

Emma Sims, a UF student and ExploraVision mentor, said this program extends far beyond a typical science fair as it encourages students to think critically.

“I just think it’s better than the traditional science fair project of ‘I made a potato battery.’ I think this made them think a lot harder and think more about science and how we can go somewhere instead of just making a project and throwing it in the garbage.”

Sims added she wished there had been more programs like this when she was in school. She thinks it is encouraging and uplifting to younger students.

Ryan Cason, a Howard Bishop student and ExploraVision participant, did his project on turning carbon dioxide into fuel.

He said he realizes the scope of the issue and hopes innovations like his could help fix this.

“The reason I thought about this is because CO2 is such a huge problem. There’s hundreds of thousands of tons of it in the air, and this technology helps it become something useful”

Although these students are only halfway through middle school, their meaningful solutions to scientific issues show maturity and dedication that will pave their future.

Violet is a reporter for WUFT News who can be reached by calling 352-392-6397 or emailing news@wuft.org.
Previous Feb. 5, 2020: Morning News In 90
Next Multiple Alachua County Charter Schools Struggle Financially To Comply With A New Florida Safety Law