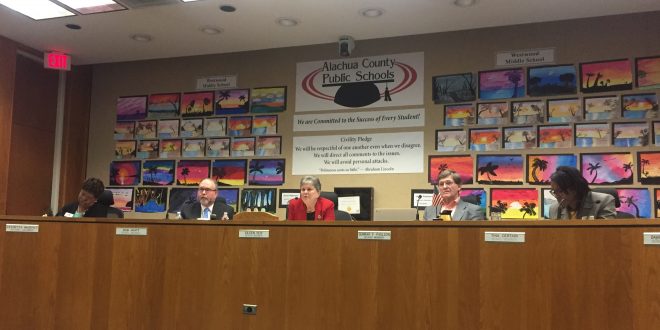 Alachua County School Board members approved the 2019 audit reports of the district’s 14 charter schools at the school board meeting on Tuesday. (Cassidy Hopson/WUFT News)

Healthy Learning Academy was left in a deteriorating financial condition after hiring a school guardian to comply with a new Florida law.

Updates were made to the Marjory Stoneman Douglas High School Public Safety Act in 2019 that required all public schools, including charter schools, to have armed protection on campus while school is in session.

The Alachua County School Board opted out of the guardian program for public schools in March 2018 in favor of using law enforcement officers instead. But a charter school’s governing board has the authority to implement the program on its own.

Many charter schools in Alachua County have opted to use the guardian program, as it’s the most affordable option. However, the cost can still be steep for smaller schools.

Healthy Learning Academy spent nearly $22,000 hiring their school’s guardian, covering his salary and training. This, coupled with spending on other safety precautions such as industrial metal doors, a fence and gate, resulted in spending over half of their general fund balance in one year.

The financial details were disclosed in an annual audit submitted to the School Board this week.

“It’s actually very expensive and it is very scary,” said Healthy Learning Academy’s principal Suzanne Borganelli. “We were told that if we did not have this, they could close us down.”

Some charter schools have laid off paraprofessionals to afford hiring a guardian. The guardian then may need to take on multiple roles at the school to fill the new gaps.

The guardian at Resilience Charter School acts as a substitute teacher when needed and helps serve lunch, according to the school’s director Jenny Hill.

“My guardian is expected to do lots of things around the school to help because I don’t have money to pay someone else to do those things,” said Hill.

Even after a school has covered the initial costs of hiring a guardian, there is still potential for more financial hardship later on.

If a guardian takes sick leave or suddenly quits, the school is still obligated to have armed protection on campus.

Schools can hire an off-duty law enforcement officer for a day at $50 an hour. But many local charter schools can’t afford this as a long-term solution.

Some charter schools have begun putting administrators through the guardian training program, so they always have a backup option.

Resilience Charter School has one designated guardian but Hill has volunteered to undergo training to become a secondary guardian, as many administrators at local charter schools have elected to do as well.

With a small staff, however, it can be hard to find someone willing to go through the program.

“We don’t necessarily have someone willing or wanting to go through firearms training and become the person who carries a gun on school campus,” said Hill. “None of us went into education to do that.”

Alachua County Sheriff’s Office covers the cost of training guardians but Hill, like Borganelli, still paid their school’s guardian for their time in the training program.

But these funds typically only cover a portion of the expenses, forcing schools to dip into their general funds to cover the rest.

This year, Healthy Learning Academy received $1,700 through a school hardening grant to cover the expenses of security cameras that cost $5,000. The remainder of the bill will be paid using the school’s general fund, which is ideally for educational purposes.

“We appreciate the expectation that schools will do more to keep students safe,” said Hill. “But without funding to make that possible it’s extremely hard and it’s not necessarily sustainable to be set up this way.”

Cassidy is a reporter for WUFT News who can be reached by calling 352-392-6397 or emailing news@wuft.org.
Previous Students Celebrate The Conclusion of Howard Bishop Middle School’s ExploraVision Program
Next Newberry Becomes First Alachua County High School To Reach 100% Graduation Rate