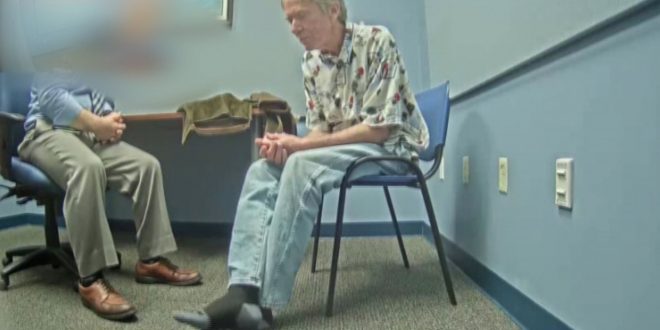 Alachua County Sheriff's Office Det. James Parker, left, questions Paul Williams about the killings of Leslie and Paige Williams, his wife and daughter, on Nov. 15, 2008. The State Attorney's Office for the Eighth Judicial Circuit reviewed, partially redacted and released the video after WUFT made a public record request for a video copy of the five-hour interview.

In the hours after their deaths, the man who confessed to fatally stabbing, beating and slashing his wife and teenage daughter in a violent, bloody double-murder could not stop focusing on his hands.

A newly revealed video from his confession to a detective shows the hands of Paul Graves Williams, 62, visibly scratched. He complained that a finger appeared black and blue. He opened a water bottle with his teeth because his hands hurt so badly. And in a rambling, bizarre statement, Williams said that after the killings he discarded his cell phone near Georgia’s border then drove toward Ormond Beach on Florida’s east coast to wash his family’s blood from his hands in the surf.

The nearly seven-hour video, obtained by WUFT, shows that Williams:

The video offers new clues into one of the region’s most violent and disturbing murder cases in recent history. Investigators said Paige Williams, 15, was stabbed at least 35 times, and Leslie Williams was stabbed and beaten. Their bodies were posed inside the home, where blood slicked the floors, and Williams told investigators he stayed with their bodies for at least a day before he fled the scene. Alachua County sheriff’s deputies arrested him when he returned to the suburban home while they were processing the grisly crime scene.

The public defender in the case has already signaled that Williams will rely on an insanity defense. The accused killer’s demeanor in the video – filmed the day of his arrest in November 2018 – reflects either genuine befuddlement and irrational thinking, or deliberate efforts to appear that way to frustrate his prosecution on murder charges.

Williams struggled to remember basic facts from his everyday life, such as the town where he most recently worked or what time his family usually ate dinner. But he remembered that his high school’s mascot was a panther and excitedly described in detail his hobby of playing flying disc games.

Two court-appointed mental health experts disagree whether Williams is competent to stand trial or assist in his own criminal defense. Circuit Judge William Davis appointed a third doctor, Jennifer M. Rohrer, a forensic and clinical psychologist, to examine Williams and report her findings. A hearing to discuss how the case may proceed is set for Feb. 18.

On the video, Williams told sheriff’s Det. James Parker that he will miss his family. Another daughter, Lindsey Williams, who is pregnant with Williams’ first grandchild, lives in Tallahassee and is expected to testify for prosecutors. She has declined to talk about the case.

“My family is everything to me,” Williams said, “and I’m going to miss them very much.” At another point, he described his family as “awesome.”

Parker asked Williams whether he had been diagnosed with health issues, such as mental illness. He answered, “Everything.”

If Williams is deemed incompetent, his case will transfer to mental health court, where he could be sent to a treatment facility.

Williams also noted during his interview that he had stopped eating. His wife’s coworker, Bridgette Weeks, previously said in an interview that Mrs. Williams told her days before the murders that Williams had been admitted to a hospital with pancreatitis.

Williams lifted his shirt for the detective, revealing his gaunt frame. “I want to show you how skinny I got,” he said. At one point, he said it had been years since he had any food.

Leslie Williams told friends she was proud of her daughters, but Williams told the detective that Paige made bad choices and blamed his parenting.

“The worst was I was disappointed in myself,” he said, “and that I didn’t do a better job raising her.”

Williams blamed his actions on the devil.

“I was definitely overtaken by something that I can’t explain,” he said. “Something came over me.”

He said he could not explain it but knew what it was.

“Definitely the devil,” he said.

WUFT-TV’s Quan McWil has this report on the video’s release.

Brianna is a reporter for WUFT News who can be reached by calling 352-392-6397 or emailing news@wuft.org.
Previous Feb. 4, 2020: Morning News In 90
Next Florida Supreme Court Questions Clarity Of Proposed Assault Weapons Ban