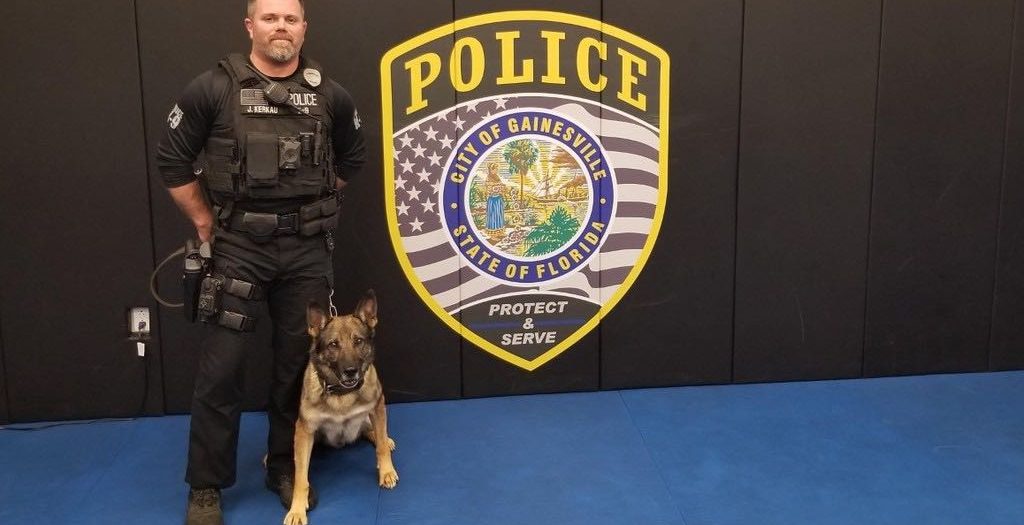 The Gainesville Police Department's Cpl. Jeff Kerkau and K-9 Roo before heading out on patrol. The team has been together for eight years. (Kayla Price/WUFT News)

Narcotics Dogs Stay on the Beat in Gainesville Despite Changed Laws

Hemp, a form of marijuana with small amounts of THC that became legal statewide in July, smells identical to marijuana. It is impossible for the K-9s to know the difference, Chief Inspector Jorge Campos said.

But, Cpl. Jeff Kerkau said, “nobody smokes hemp. It doesn’t get you high, so what’s the point?”

Still, GPD has implemented a new “odor plus one” rule. The officers who find a substance that could be marijuana look for other indicators, such as how it is packaged and its proximity to other known controlled substances, Campos said.

According to Campos, GPD has no plans to change the K-9 unit, but it is monitoring law changes. If recreational marijuana becomes legal, the unit will retire its current dogs and purchase ones trained without the scent. The dogs would be trained in other narcotics and patrol duty. The current dogs could be trained to alert differently, depending on the drug, but it would be counterproductive.

“The training time would be astronomical,” Campos said. Both handlers and dogs would spend too much time training and not enough on patrol.

As it is, Kerkau said he and his K-9 Roo have not conducted a search for drugs in nearly two months. Roo’s priorities now lie elsewhere.

The entire K-9 unit averages fewer than four narcotics searches a month, according to Owens. Of the unit’s work, 95% is tracking and apprehension.

No significant change in drug-related arrests has occurred, Campos said.

The unit currently has three vacancies for officer-and-dog teams. With more teams, the unit hopes to increase its K-9 use, Owens said.

“The dogs spend all day with us,” Kerkau said. “They’re like our family.”

Kayla is a reporter for WUFT News who can be reached by calling 352-392-6397 or emailing news@wuft.org.
Previous The Point, Jan. 30, 2020: ‘Where Did You Sleep Last Night?’ Volunteers Try To Get Accurate Count Of Area’s Homeless
Next State Still Working Out Flaws With Firefighter Cancer Bill