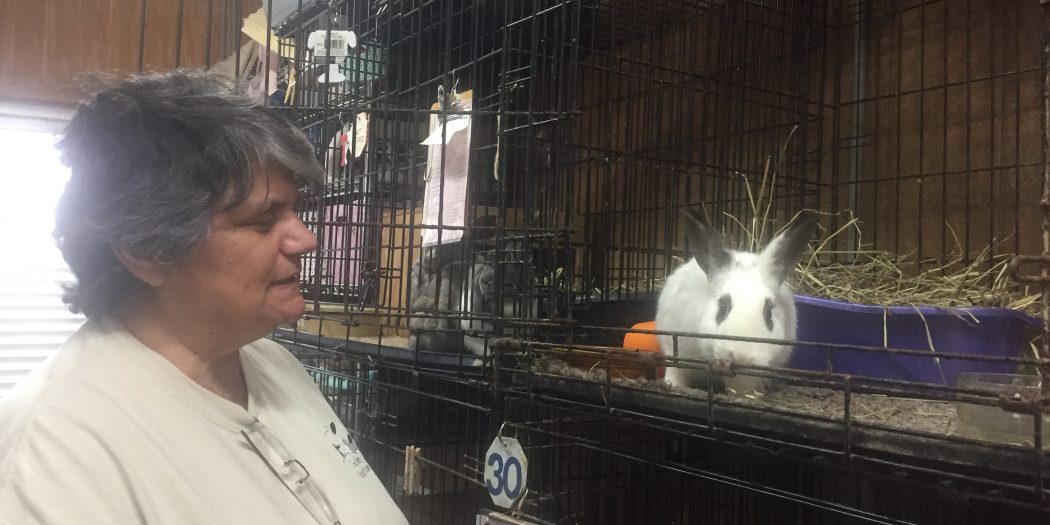 Kathy Finelli attends to one of the 100 rabbits in Gainesville Rabbit Rescue’s care. (Cassidy Hopson/WUFT News)

Kathy Finelli has just about seen it all in her 15 years leading Gainesville Rabbit Rescue.

Even the reports of rotting food, feces, urine and a dead guinea pig in October at an Edgewater home in Volusia County weren’t unfamiliar. Police responded to the home after a well-being check request and inside found 245 animals and three children living in deplorable conditions.

Three of the 12 rabbits in the home — Dennis, Wilma and Trinket — are now being cared for at Gainesville Rabbit Rescue.

Finelli, director of Gainesville Rabbit Rescue, two years ago rescued 33 rabbits from a hoarder’s home in Ocala. Each was confined to a small wire-bottomed cage and only released for breeding. Finelli saw these conditions firsthand; the sight of knee-deep fecal matter in some areas of the home remains clear in her memory.

“It’s not anything that I could even imagine having to live in no matter what I was: a rabbit, a cat or a dog or a human, in the case of Edgewater,” Finelli said.

While Gainesville Rabbit Rescue cares for rabbits taken from these conditions, the end goal is for the animals to get adopted into a loving home.

“When you see them flourish and you see that light come back into their eyes, that’s what keeps you able to do this,” Finelli said. “If you don’t see that, and you don’t find great homes for them, this will just really kill you.”

Concern for the well-being of animal health providers has risen over the past year following a Centers for Disease Control and Prevention study that found veterinarians have in the past three decades died by suicide at a higher rate than the general population. The study did not include people who work at animal rescues.

Along with Finelli, other Gainesville-based animal rescue workers have discovered the emotional toll that comes with the job.

Dhyana Fronk has been rescuing cats since 2014 through her nonprofit, Angel Whispurrz Cat Rescue.

Her favorite part of the job is being able to rehabilitate an animal, see it get adopted into a good home and then ultimately receive update photos, making her effort worthwhile.

Still, there are days when she wishes she could go back in time to reconsider pursuing a career in animal rescue.

“There are definitely burnout days,” Fronk said. “Regardless of that feeling, you still have to put food in the bowls and scoop the litter. There are too many depending on me for survival, to give that medicine or that next pill.”

Then, there are the financial struggles that come with running a nonprofit, leaving Fronk wondering at times where she is going to find the money to feed all of her rescued animals.

“It can be very hard,” she said. “The public tends to believe that we’re just sitting on a big pile of money and that everybody else is donating so they don’t.”

Brandi Phillips has been the Animal Technical Rescue branch director for the past two years.

“It does have a toll emotionally on people, in part because animals and children tend to be viewed as innocent victims,” said Phillips.

But the highs outweigh the lows for her.

“When we’re able to provide a happy ending for an animal and be able to get an animal out of a distressing situation, that’s always a really feel-good moment for everybody involved,” Phillips said. “We have a tendency to really focus on those moments.”

Below: Kathy Finelli explains the joys and trials of caring for rabbits as part of her Gainesville Rabbit Rescue work.