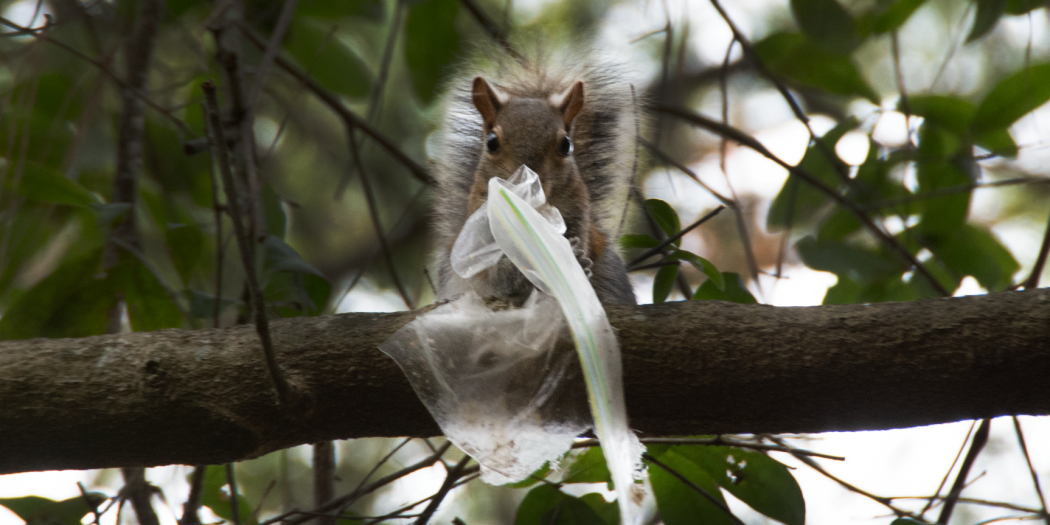 A squirrel outside Brookwood Terrace apartments in Gainesville tries to eat a plastic bag it found. (Sam Schaffer/WUFT News)

A clothing swap at The Repurpose Project in Gainesville Sunday kicked off a week of promoting a lesser known conservation lifestyle: living in a way that produces zero waste.

Zero Waste Week Gainesville is a week of themed days that aims to promote different aspects of living a zero waste lifestyle. It will culminate on Saturday with an exhibition of a circular economy, said Sarah Goff, executive director and co-founder of The Repurpose Project.

Zero waste is defined for people as living in a way that produces little to no waste. For companies, it would consist of a 90% reduction in waste by weight, said Amanda Waddle, zero waste and policy adviser at Zero Waste Gainesville.

Sunday is day one — refuse and reduce. Goff said the most important aspect of living a zero waste lifestyle is refusing and reducing.

She said a big problem are free giveaways. Often at events, there will be tables promoting various organizations and handing out mementos like labeled pens or bags. These, Goff said, are generally just pollutants that could be avoided by attendees refusing them.

The Repurpose Project’s clothing swap encouraged people to bring out their old clothes and see what used clothing they might like instead of buying new clothes and sending more to the landfill, Goff said.

The sharing economy belief is that not everybody needs to own everything. People go days or even weeks without using their lawnmower; those are days when another person in their local community could use it, Goff said.

To facilitate this lifestyle, some communities around the country have instituted tool libraries and thing libraries, Goff said. These are places where paying members can go and rent whatever thing — lawnmower, kayak, wrench — they might need.

By sharing items instead of everyone owning their own, the market demand for the item decreases, as does the need to manufacture such items.

The third day’s theme is reuse and repurpose. A major way for people to reduce their environmental footprint is to buy used, Goff said. When someone buys a used item, that item goes into use with that person instead of going to a landfill.

The Repurpose Project accepts many usable materials that other thrift shops don’t, Goff said. When people buy these various materials, they keep them out of the landfill and save money.

To promote buying used, the thrift stores in the Reuse Alliance of Alachua — Habitat for Humanity, Humane Society, Flashbacks and more — are all having sales on Tuesday, Goff said.

Wednesday’s theme is repair. Goff encouraged people to take this day to fix something instead of replacing it.

Goff said that most things can be fixed; it just takes some thinking and maybe an internet video. She avoided a sad day recently when her daughter’s singing bird stopped singing. Goff said she opened the toy and noticed a wire had come unplugged.

Recycle Thursday and Rot Friday offer an opportunity to read about the correct recycling procedure and how to compost. Recycling correctly will reduce the cost of recycling and make it more feasible of a process.

“Composting is the gateway to zero waste,” Goff said. It’s the first thing she did when beginning to conserve, and it changed the way she thought about trash.

Once you get all of the food waste out, trash isn’t so nasty; it’s mostly just packaging at that point, she said.

The week will culminate with the Zero Waste and Circular Economy Forum on Saturday. Two representatives from Zero Waste USA will be at The Repurpose Project hosting a forum, Waddle said.

There will also be tables showcasing a circular economy at the forum, Waddle said. A circular economy is one where things are used over and over again instead of being sent to the landfill. It uses similar practices to a sharing economy.

A list of all events for the week can be found here.

Sam is a reporter for WUFT News who can be reached by calling 352-392-6397 or emailing news@wuft.org.
Previous Weeks Before Registration Deadline, Amendment 4 Is Still A Mess In Florida
Next January 27, 2020: Morning News In 90