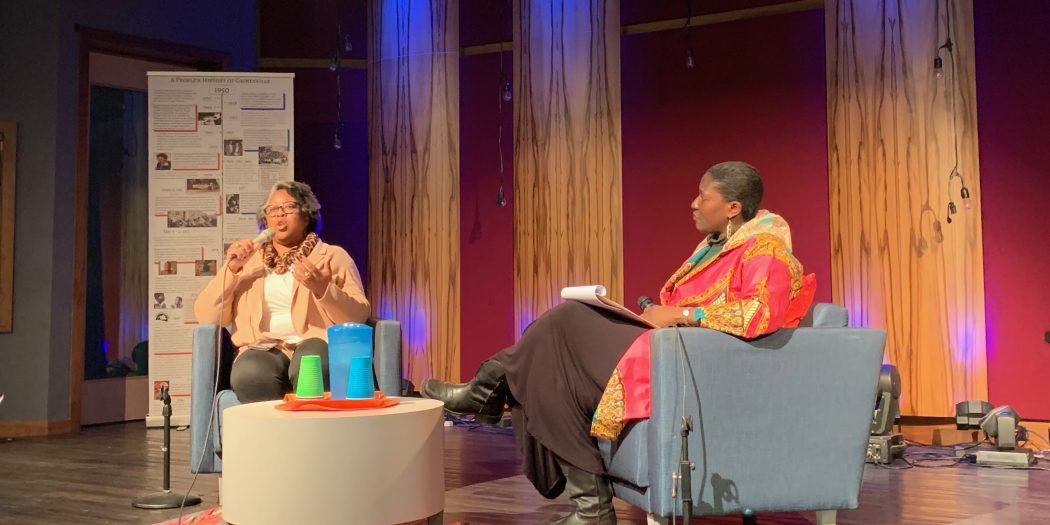 Kimberlee Archie, director of the Office of Equity and Inclusion in Asheville, North Carolina, shares her experience with equity work in Asheville and what Gainesville can learn from it. Gainesville City Commissioner Gail Johnson is also on the stage, at right. (Maya Punjwani/WUFT News)

People from various segments of the Gainesville community packed the small, intimate Heartwood Soundstage venue on Wednesday evening. They were eager to hear about how the city plans to tackle racial inequity in the new decade.

“I usually see the same faces in the room at these things, but I don’t recognize more than half of you,” City Commissioner Gail Johnson told the crowd. “You all showed up here tonight for justice.”

The City of Gainesville’s Race and Equity Subcommittee and Office of Equal Opportunity hosted a kickoff event to involve the community in discussions about Gainesville’s steps to address racial equity.

Equal Opportunity Director Teneeshia Marshall said the subcommittee, which consists of four city commissioners, was formed last year to present race and equity goals for the City Commission to implement.

Shelby Taylor, a spokeswoman for the City of Gainesville, said the equity kickoff is the subcommittee’s first public event to launch an expansion of its efforts.

“We want to involve the community in what we are doing internally to make our policies and practices more equitable,” Taylor said. “This includes making sure we are unbiased in our decision-making and hiring practices.”

Johnson moderated a discussion with Kimberlee Archie, director of the Office of Equity and Inclusion in Asheville, North Carolina, about her experience overseeing equity work there. Archie provided suggestions for Gainesville, along with a realistic picture of what the work will look like after a year.

According to Taylor, about 125 people attended Wednesday’s event. Audience members snapped their fingers and yelled affirmations like “yes” or “true” as Archie responded to questions.

In order to educate the public about implicit or unconscious biases, Kate Ratliff, executive director of Project Implicit Inc. and assistant professor of psychology at the University of Florida, led the audience through the interactive Implicit Association Test. She said the goal was to have people reflect on their hidden biases and show how they can be a barrier to equity.

“The expectations we have for what is correct in the world often causes problems when making decisions,” Ratliff told the crowd. “A solution to implicit bias would be putting practices and policies in place to change our biases.”

Marshall provided updates about the Office of Equal Opportunity, including how it is adding two new equity specialist positions. She also announced that the office’s name will be changing to the Office of Equity and Inclusion in order to align with new goals.

Marshall explained to the crowd that there is a significant difference between equality and equity. She said that equality assumes that everyone is starting from the same place, while equity acknowledges that this is not true, and some people need more help than others.

Johnson said the City Commission will be updating a long-term comprehensive plan or “book of rules for the city” over the next 10 years.

“We’ve decided racial equity will be a core value in the comprehensive plan,” Johnson said. “I can count on maybe two hands municipalities in the country that are doing this work.”

She said there will be a focus on understanding how the city is spending money in the city, which has not been equitable or changed in the last decade. She said there are also plans to conduct a disparity study and to talk to community partners about how they plan to address racial equity.

A resolution further detailing these plans was handed out at the event.

Latashia Brimm, executive director of the Florida Council for Incarcerated and Formerly Incarcerated Women and Girls, said she had hoped to hear more about how the city plans to help people re-entering society after being incarcerated. She said this is an issue that has not been addressed in Gainesville.

“We need to think about the people who have paid their debts to society and need the support to not be systematically excluded,” Brimm said.

As a fellow of Community Spring, a new grassroots organization in Gainesville focused on addressing poverty, Brimm plans to organize around this issue herself.

“The disparity report I read said that blacks are nine times more likely to become inmates in Alachua County than other counties,” Brimm said. “This is heartbreaking because there’s clearly inequity, and action needs to be taken more than just talking.”

Brimm was raised in Gainesville but later moved to Jacksonville. She said that when she returned to Gainesville in 2017, she thought the equity issue was “way worse than before.”

Upon returning to her hometown, Brimm said it was difficult for her to find employment that paid enough for her to sustain herself. She started to work for Apartment Hunters and would try to help people find apartments with housing choice vouchers. She said they were often unsuccessful because of the stigma attached to the vouchers.

“People are excluded in Gainesville, and I see it firsthand,” Brimm said.

Jeffrey Shapiro, a retired scientist, thought the event was a helpful introduction to the city’s plans. He said he does believe that Gainesville needs a new approach to confront inequality.

“There are advantages I have that I’ve heard black folks refer to as white privilege, so there’s a lot of difficulty in overcoming that,” Shapiro said. “It’s up to all of us in the community to help participate.”

Marshall announced that the City of Gainesville plans to have more activities and events that involve the community and provide updates on its ongoing work to improve equity.

Editor’s note: This story has been updated to include more precise details about the city’s plans.

Maya is a reporter for WUFT News who can be reached by calling 352-392-6397 or emailing news@wuft.org.
Previous With ‘Duress,’ Millhopper Montessori Student Becomes Alachua County’s Spelling Champion
Next The Point, Jan. 23, 2020: Florida Remained Top U.S. State For Shark Attacks In 2019