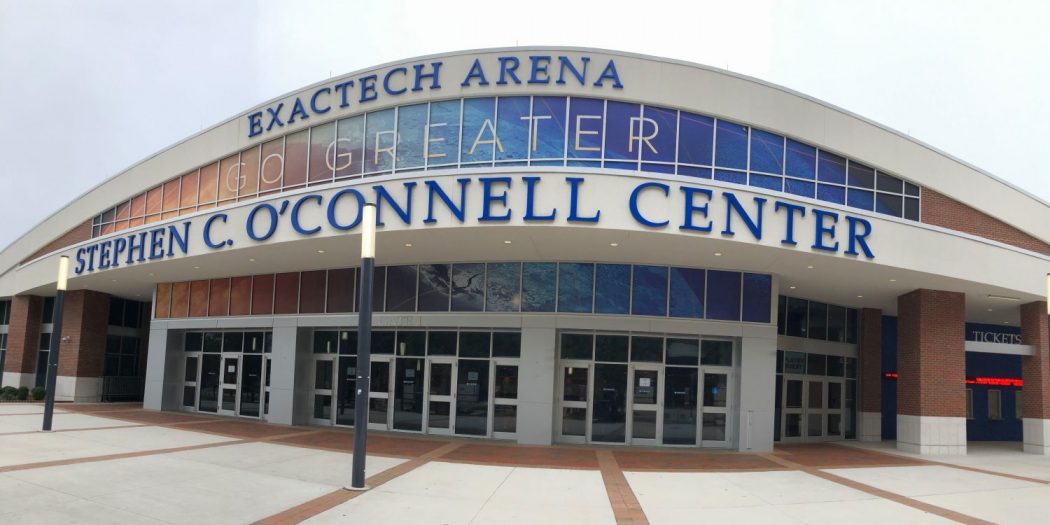 The University of Florida Board of Trustees in 2016 voted to add medical device company Exactech Inc.'s name to the O'Connell Center arena on campus. Such decisions could in the future require legislative approval based on lawmaker questioning during the 2020 session. (WUFT News file photo)

TALLAHASSEE — Florida’s public colleges and universities may have to ask permission from the Legislature before they can rename sports arenas and other facilities after companies who are willing to pay for the right.

College officials on Wednesday came under sharp questioning by a House education panel looking into curbing the practice.

Fine noted that legislative action is typically required for many public buildings. “To make sure our institutions are acting in concert with our elected leaders. It makes sense to have them run through the same process,” he said.

College athletics provides millions of dollars in revenue for schools, not just in ticket sales but also in licensing opportunities — including selling rights to the highest bidder to rename venues. Some campuses have received millions of dollars from corporations seeking to raise their visibility.

Last month, Florida Atlantic University announced that its basketball arena would be renamed the RoofClaim.com Arena as part of a 10-year agreement worth $5 million.

Earlier in the year, the University of Central Florida rebranded its arena as Addition Financial, after the company changed its name from CFE Credit Union. The original deal gave the school about $564,000 a year since inking the licensing deal in 2013.

In addition, the university had also sold naming rights for its stadium.

The University of Florida, which is home to some of the country’s most successful and high-profile sports teams, is currently in a 10-year, $5.9 million deal with Exactech, whose name now fronts the arena that hosts the school’s basketball, gymnastics and volleyball programs.

University officials defended the practice, arguing that it was an avenue to support campus programs.

In the case of Florida Atlantic University, the motivation was to elevate the school’s profile while helping sustain sports programs.

“A university strategy that we have is to elevate or leverage our athletic program to attract visibility not only within the state of Florida but nationwide,” said Danita Nias, the chief executive officer of the Florida Atlantic University Foundation. “That vision is attached to attracting students and to build a stronger profile.”

The Associated Press is a wire service to which WUFT News subscribes.
Previous The Point, Jan. 23, 2020: Florida Remained Top U.S. State For Shark Attacks In 2019
Next Forgotten Jazz Giant’s Triumphs and Tragedies Chronicled in New Biography by Travis Atria