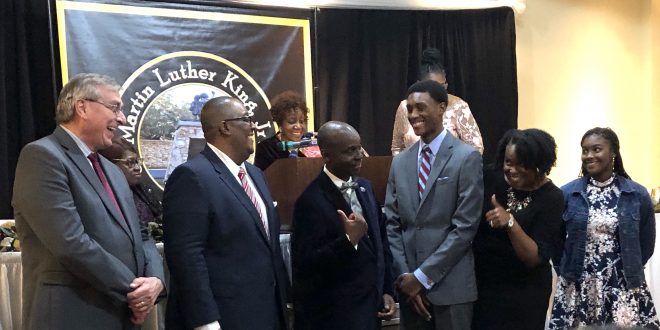 “If Dr. King were alive today, he would be shocked,” said Rodney Long, president of the Martin Luther King Jr. Commission.

Speaking on the theme “A Community in Crisis: What’s Your Response,” Long delivered his annual State of the Dream Address. This year, he reflected on the highs and lows of racial justice throughout the past decade. The speech kicked off a week of events sponsored by the commission, culminating in the Jan. 20 national holiday.

Although decades have passed since the height of the civil rights movement and Martin Luther King Jr.’s work, Long cited racial disparity in income and housing as proof that King’s dream hasn’t been fulfilled.

“African Americans in Alachua County are almost 2.5 times more likely to be unemployed than their non-Hispanic white peers,” he said.

After the speech, the commission honored the award winners.

The 2020 Hall of Fame Award was given to community activist N’Kwanda Jah, executive director of the Cultural Arts Coalition.

“I’ve been blessed to be in this community for over 40 years. I have ancestors … who propped me up in the beginning. They believed in me. They supported me,” she said. “My dream … was supported by some really wonderful people.”

Sheila Baker-Bell, the assistant pastor at PASSAGE Family Church, was most excited about learning about the Edna M. Hart Keeper of the Dream Scholarship Award recipient.

In addition to being his high school’s class president, Gregory is a member of the Black Student Union and has completed more than 350 volunteer hours, according to the commission.

With the $7,500 scholarship, he said he hopes to study graphic design, and his first-choice school is the University of Florida.

Both Jah and Gregory will be delivering speeches at the National Holiday Gospel Program on Jan. 20 at 2 p.m. at the MLK Multi-Purpose Center, located at 1029 NE 14th St.

“Every year, I think it’s good for us to be able to reflect on how far we’ve come and think about what Dr. King’s dream means as it is today,” she said. “It’s just a reminder that we have to keep pushing and not believe that we have arrived.”

Samantha is a reporter for WUFT News who can be reached by calling 352-392-6397 or emailing news@wuft.org.
Previous Justices Block Proposal To Overhaul Utility Industry
Next The Point, Jan. 13, 2020: Thousands Of Florida Teachers Prepare To Rally In Tallahassee