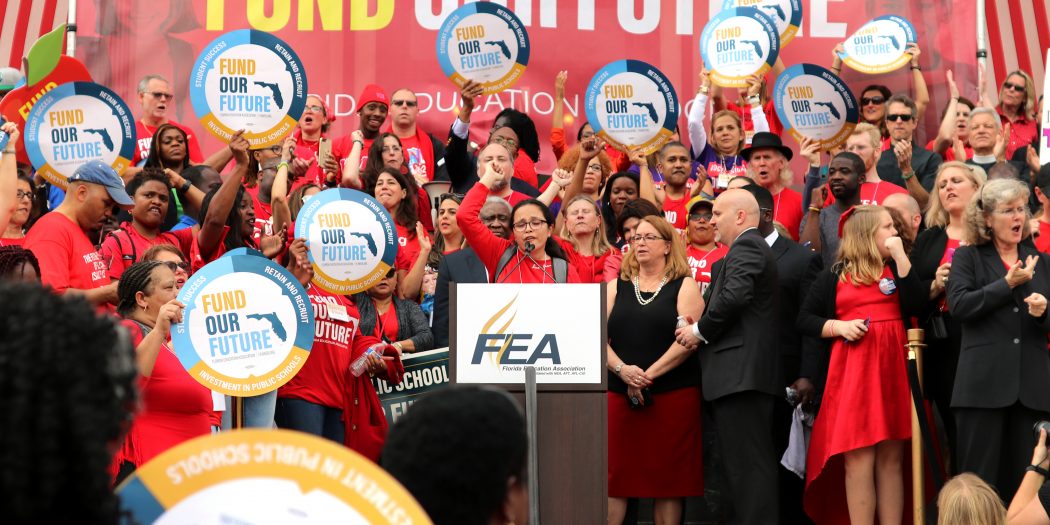 In a busy rush ahead of the start of the legislative session, a Senate panel approved a Republican proposal to give Florida teachers raises, an early signal that lawmakers will consider more money for educators in classrooms.

Questions remain about how much money and who exactly will receive it.

The Senate Education Committee approved a bill Monday by Sen. Manny Diaz, R-Miami, that would allocate money in the Florida budget and require school districts to use it to raise teacher salaries. The vote on the bill, SB 1088, marked the beginning of a conversation about educator salaries that was expected to continue through the legislative session until mid-March, Diaz said.

Outside the Capitol, thousands of teachers from across Florida protested their low pay during a “Take on Tallahassee” rally, as Democratic lawmakers announced their own plan to increase salaries. The legislative session is set to begin officially Tuesday.

Diaz said questions persist about how much money Florida can commit every year to teacher salaries and how it would be distributed across the state, where costs of living can vary dramatically from urban cities to rural counties and towns.

“This is the initiating the conversation,” Diaz said. “This is purposefully left open.” He said the size of raises would depend on the state’s budget: “This is all going to depend on how much money we have.”

Meanwhile, Democrats in the Senate announced their own proposal, SB 1854, which would give all teachers and support staff pay increases over a 10-year period.

Separately, Gov. Ron DeSantis has proposed spending about $900 million to improve teacher pay, setting a new minimum salary of $47,500 for teachers. His plan also would create a new $300 million bonus program for teachers and principals.

Senate Minority Leader Audrey Gibson, D-Jacksonville, said the Democrats’ plan would use the same $900 million that DeSantis was proposing.

The bill would include a cost of living increase of 3% each year over a decade, then raise salaries 4.5% over 10 years. The cost of living amounts would vary by county, said Sen. Bobby Powell, D-Palm Beach.

Gibson said teachers under the Democrats’ plan who remain in the classroom would see their salaries continue to improve. She acknowledged it was “not a huge raise,” but would elevate Florida in national rankings among teacher pay.

Gibson said the bill was intended to reward more than new teachers, who were the focus of the governor’s proposal.

“They get up every day and go and do their jobs in our schools, too,” she said. “We want to keep morale high, and these are individuals who see each other every day. They work shoulder-to-shoulder every day with our kids, and so they deserve consideration.”

Outside on the city’s streets, educators chanted and waved signs on the steps of the Florida Historic Capitol Museum. The signs protesters carried read, “My second job pays me to teach,” “Don’t make me use my teacher voice!” and “Teacher burnout is why we have this turnout.”

Tanika Bennett, a language arts teacher from Miami-Dade, stepped off the bus after a restless eight-hour ride through the night with her 12-year-old daughter, Layla, around 9:30 a.m. They were among the first buses to arrive in Tallahassee. She said teachers in Miami can’t afford to buy a home on their salary alone.

Nilsa Baillou, also a Miami-Dade teacher, stood in front of a bathroom sink inside the civic center with a bag of toiletries propped on the counter in front of her. With toothbrush in hand and the smell of a sweet lotion in the air, she was still getting ready for her day after the overnight ride.

“This is a job I’ve committed my life to,” she said, clutching her eyebrow pencil. “I’m going to be compensated for pouring out my heart and soul. Everyone has a teacher at some point in their life.”

Some teachers in Polk County, between Tampa and Orlando, said they worried about retribution for trekking to Tallahassee. Christen Fiermonti, Josie Gowdy and Deanna Krause are three elementary school teachers.

Fiermonti said so many teachers attended they were comfortable that they couldn’t be punished.

“All the teachers in Polk County came together,” she said. “We felt that because there were so many of us, there was no way that they would be able to take repercussions and fire us.”

Also Monday, DeSantis announced in Jacksonville that the Florida Prepaid College Board will lower by $1.3 billion the prices it charges families who pay for a child’s college tuition in advance.

Those price reductions apply to plans purchased since 2008 and were possible because tuition increases in Florida have been lower than expected. The governor said 224,000 people would be affected by the lower prices.

Florida’s average in-state tuition of about $6,400 is among the lowest in the United States, despite the academic success of the state’s colleges and universities. DeSantis in September noted new standings by U.S. News and World Report ranking the University of Florida 7th and Florida State University 18th among public universities across the country.