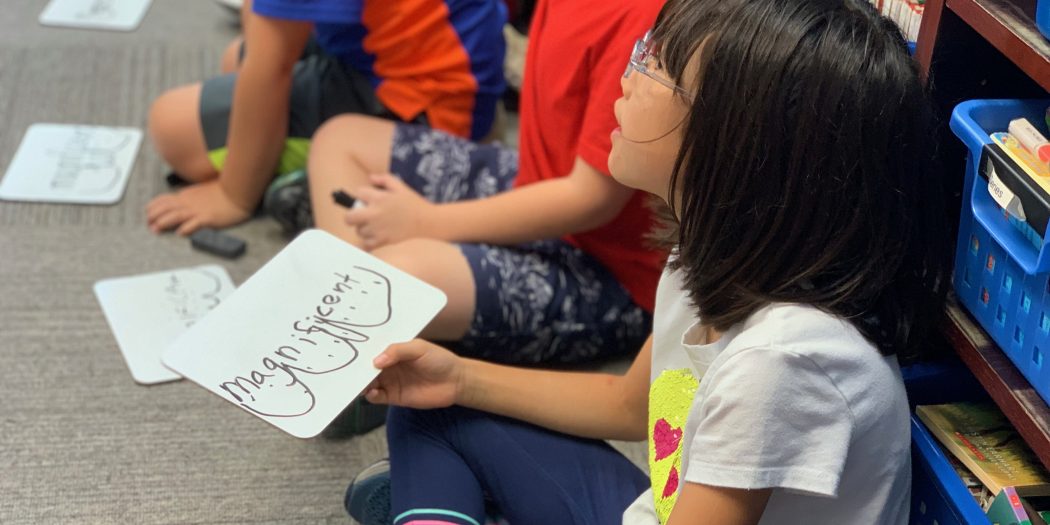 A second grader looks up after finishing breaking down the word “magnificent” at Millhopper Montesori School in Gainesville. (Allison Hellier/WUFT News)

Elaine Manion wrote a word on the large whiteboard then turned to eight second-graders waving their hands to be called upon.

“Psy…chol…o…gy,” Brenden Greene said, sounding out the word crisscross on a gray carpet.

Dotting, dashing and chunking is a part of a reading method – it’s called phono-graphix – that has students separate and identify different sounds in words.

“It’s not about memorizing letters,” Manion, who has been teaching the method since 1996, told WUFT News. “It’s about decoding: Looking at letters as pictures of sounds.”

However, a grassroots education coalition aims to have it used in after-school programs in the county, in an effort to help improve literacy rates and close the resulting racial disparity.

A January 2018 report by the University of Florida Bureau of Economic and Business Research (BEBR) found a 45% gap in reading proficiency between black and white third graders in the county. The Florida Department of Education cited the same exact gap between white and black students in grades pre-K through 12 in language arts in 2018-19. The statewide gap was 29%.

Razia Ali Hamm, 51, of Trinidad, is leading the coalition seeking to help more students learn to read. Ali Hamm discovered the BEBR statistics after doing research to understand why her 7-year-old daughter was behind in reading. The girl previously went to a private school that did not reopen in the fall and now attends a private school in a mixed class of first and second graders.

Ali Hamm said Manion gave her daughter private reading lessons using phono-graphix in August, two weeks prior to school starting. After nine weekly hour-long sessions, the girl, whose mother asked that she not be identified by name, could read any book.

“She’s encountering words she’s never read before and using what she’s learned from the program to figure them out,” said Ali Hamm, who in the early 1990s helped Rwandan and Burundian refugees while working for Doctors Without Borders, an international organization.

Now the owner of an acupuncture business in Gainesville, Ali Hamm said she felt lucky to have the resources to get her daughter back on track. But she could not stop there.

Ali Hamm started making calls and asking questions to city officials and the Alachua County School Board: Why does the reading gap exist? Why hasn’t anything changed? Why weren’t schools trying other methods like phono-graphix? What could she do?

She wasn’t getting any clear answers. So Ali Hamm took a different route.

“I couldn’t just do nothing,” she said. “It wasn’t an option to not care and find a solution.”

In November, Schools Superintendent Karen Clarke approved the use of phono-graphix at the district’s 21st Century Community Learning Centers. Kevin Berry, the district’s elementary curriculum supervisor, said phono-graphix is seriously being considered as a teaching option.

“We don’t want this to be a one-time exciting meeting – and then it just falls away,” Berry said.

He noted, however, that a variety of methods are needed to ensure reading comprehension.

“There’s a lot more to literacy than just being able to read,” Berry said.

“We are more than willing to open the doors to our school so people can see this program in action,” McKnight-Hollinger said. “I think this can work for any school and any student.”

Manion said phono-graphix involves blending, segmenting, auditory processing and coding – all of which is taught in the context of words. She said it also improves a student’s vocabulary.

District 1 school board member Tina Certain, who attended the Oct. 24 coalition meeting, said she is hopeful phono-graphix can work districtwide, but wants to see a coordinated effort.

“This problem is about more than a program,” Certain said. “Structural change needs to happen.”

Anne Koterba, a member of the Alachua County Education Task Force, said programs like the proposal to add phono-graphix to the school curriculum are just one step in closing the gap.

“Our district is underperforming,” Koterba said. “We are putting these kids on a path to nowhere.”

Ali Hamm said she won’t dwell on the poor statistics too much. All she can do fight for a program she believes will give every child in the district the foundation to succeed. Her long-term goal: Using phono-graphix to teach third grade, middle school and high school students.

“We have to get this right, because we won’t get a second chance,” she said. “If we fail our children, we lose.”

Editor’s note: Millhopper Montessori is a financial supporter of WUFT-FM.

Allison is a reporter for WUFT News who can be reached by calling 352-392-6397 or emailing news@wuft.org.
Previous Sunshine Savior
Next The Point, Dec. 13, 2019: How Barbara Petersen Became Florida’s ‘Sunshine Savior’