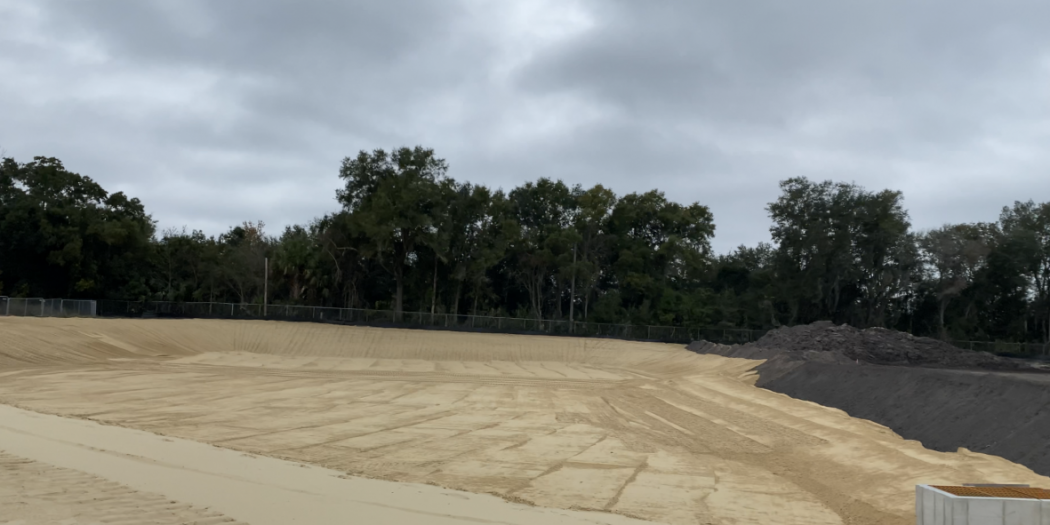 A new containment wall is nearly installed on the Cabot side of the toxic site in Gainesville. (Karmiyis Edwards/WUFT News)

Over 100 feet of dirt was stacked high into the air Wednesday at the Cabot side of the Cabot-Koppers Superfund site, as bulldozers moved around the top of the pile.

This is where what’s known as a slurry wall is being built, marking the next stage in the site’s decades-long cleanup, soil remediation and contamination containment.

A group of two dozen invited Gainesville residents and Alachua County officials saw the construction site’s progress near North Main Street and Northwest 23rd Avenue. The slurry wall is being built there to control contamination left over from a pine-tar plant that was on the site for much of the 20th Century.

Gordon Reynolds, Cabot Corporation’s director of environmental affairs, compared the wall to a very big bathtub. The Boston-based company deals with chemicals and the environment.

The main goal of the slurry wall is to ensure the groundwater isn’t contaminated.

It will enclose all of the remaining harmful substances and stop them from seeping any lower into the groundwater, Reynolds said, while also preventing further contamination from reaching any other areas nearby.

The site is near the Stephen Foster neighborhood in Gainesville. It is also right behind a car dealership and several other businesses.

Two storm ponds are also on the site — one of them maintained by the City of Gainesville. It was built in 1978. The pond was going to be reconstructed by Cabot, too, but city leaders recently decided they didn’t want it to be touched. The pond has little water in it at this time of year, as it only fills when it rains. Trees over six feet in height have grown within the pond. The city plans to maintain it as is.

Gerard Canon, an internal council member for Cabot, said the roots from the trees have probably compromised the clay liner underneath the pond. He said the old pond is dilapidated and doesn’t comply with state or federal law.

Cabot officials offered to build a new pond for the city because the corporation felt it needed one. Halfway through the building of the pond city officials decided they weren’t interested.

Caron said he was perplexed as to why the city took this course of action. A city spokeswoman last week told the Gainesville Sun that the city doesn’t want taxpayers to pay to maintain a new pond.

Cabot downsized its new pond and started building accordingly so that it could accommodate the stormwater runoff from their cap. The new pond cost about $35 million.

The cap that is going over the slurry wall is made of high-density polyethylene. The barrier is actually underground and can’t be seen at all.

The new pond is nearly finished.

The trencher, a massive piece of construction equipment, is expected to complete the wall in two weeks. It was originally thought to be sooner, but it is taking longer than the company originally expected.

The trencher is a machine nearly larger than two bulldozers put together. It has an attachment about 70 to 80 feet long that cuts through the dirt and clay, and it deposits the materials that will harden underground as it cuts through. It also has a laser attached that helps direct the positioning.

It moves about at a few feet every few minutes, and the machine has to nearly make a full revolution around the entire site, which is hundreds of acres.

On the street adjacent, the sounds of the trencher digging can be clearly heard, while smoke and cement smells are potent.

Karmiyis is a reporter for WUFT News who can be reached by calling 352-392-6397 or emailing news@wuft.org.
Previous House Democrats To Begin Amending Impeachment Articles Wednesday Evening
Next The Point, Dec. 12, 2019: What The ‘Slurry Wall’ Signals For The Cabot-Koppers Superfund Cleanup