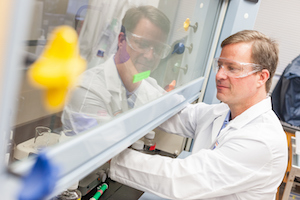 Dr. Lance McMahon is leading the University of Florida’s research into kratom, its usages and effects. (Courtesy of UF College of Pharamacy)

His mother believes Ian Mautner’s death nearly five and a half years ago at an Interstate 95 overpass can be traced back to his consumption of kratom tea at a Delray Beach kava bar.

Mautner began drinking kratom tea recreationally when he was 17 years old. He was told the product was natural, safe and would help him to think clearer and relax. However, he soon became addicted, Linda Mauter said, and the substance that he hoped would help him instead sent him down a path that eventually resulted in his suicide.

Kratom is a legal substance that can be bought at gas stations, smoke shops, kava bars or online. Testimonials from some who have used it and results from preclinical studies suggest that it helps to alleviate pain and manage symptoms of opioid withdrawal, but the unregulated sale of the drug may be encouraging its recreational use as well.

Despite kratom’s legal status in most states, Ian Mautner is not the only person whose relatives and health officials say has fallen victim to the drug.

In a sample of 27,338 overdose deaths between July 2016 and December 2017, the CDC reported 91 cases in which kratom was listed as the cause of death. Relatives of some of these victims, including Linda Mautner, have come together to form the Anti-Kratom Warriors.

The group, which currently has over 40 members from across the country, has been working to make people more aware of the drug while providing support for one another during difficult times.

“I’m a parent, and I have to do what a parent would do, which is educate,” said Mary Tabar, whose daughter Brette was affected by kratom.

Tabar noted that kratom products carry no warning of possible side effects, especially in relation to existing health conditions. They are sold as safe herbal supplements, and Tabar said users need to be informed that side effects do exist.

After taking kratom, Tabar’s daughter lost interest in things she previously loved to do, had regular mood swings and became distant. Mautner noted that her son experienced similar side effects while taking the drug; he began to isolate himself and displayed changes in his mood.

“The public needs to be informed,” Mautner said. “We didn’t know, and maybe if we had known, we would have picked up on it earlier and been able to stop it.”

Tabar earlier this fall emailed the Alachua County Board of Commissioners on behalf of the group. She sent a collection of letters detailing their loved ones’ tragic experiences with the drug. Linda Mautner also spoke at the board’s Nov. 12 meeting in hopes of gaining the support of the commissioners.

The university over the past 12 months has received $6.9 million in multiyear grants from the National Institute on Drug Abuse to fund its research.

According to Dr. Lance McMahon, principal investigator, the research is centered around understanding how the drug-like molecules in kratom impact biological systems.

McMahon and his colleagues are especially interested in kratom in regard to anti-pain effects, potential abuse liability, habit-forming effects and to what extent individuals are taking the drug because it makes them feel good, McMahon said.

“We’re trying to bridge the gap between the effects that humans report, the chemistry of the compounds and the pharmacology in between,” McMahon said.

So far, they have determined that kratom has opioid components that may drive a lot of its effects, but it is more complex than a traditional opioid. Some of the alkaloids (drug-like molecules inside the plant) can act through the serotonin and norepinephrine systems, which is similar to the way antidepressants work.

Kratom is currently being marketed as a dietary supplement, since there is not enough data to tie it to a medical claim. The UF research could help determine if kratom meets the required criteria to be classified as a drug by the FDA, McMahon said.

Kratom was due to be classified as a schedule 1 drug in 2016. A federal agency says these are “drugs with no currently accepted medical use and a high potential for abuse.” However, advocates for kratom caused the scheduling notice to be recalled.

According to Mac Haddow, senior fellow on public policy at the American Kratom Association, the issue is not pure kratom but rather adulterated kratom products that have made their way into the marketplace.

When bought from a safe seller, Haddow said kratom provides immediate pain relief with no high or side effects, which he has experienced firsthand through using kratom to treat his chronic hip pain.

Instead of trying to regulate the drug, Haddow believes that the FDA should be trying to prevent the sale of adulterated kratom products. His association has instead been active at the state level to inform consumers and protect the sale of safe, natural kratom.

“We’re in a battle with a powerful regulatory agency that just wants to seize control and is failing to regulate the most difficult problem in the kratom space: adulterated kratom products,” Haddow said.

Unless the FDA decides to schedule kratom immediately, McMahon believes that it could take around seven years for regulation to be considered. That’s the duration required for approval and completion of clinical trials.

Kratom is currently illegal in six states and a handful of cities and counties across the country. There is also pending legislation for regulating the drug in nine other states. However, regulation has been controversial due to the large number of people who claim to have had a positive experience when using kratom.

But despite the controversy, parents and relatives like Tabar and Mautner will continue to bring awareness to the potential side effects of the drug to prevent more lives being lost.

“If there are 3 million people that this works for, I’m OK with that,” Tabar said. “I’m not going to discount someone else’s experience with it, but that wasn’t our experience. Kids getting hurt who are slipping through the system: that’s what I’m fighting for, not kratom itself.”

Lauren is a reporter who can be contacted by calling 352-392-6397 or emailing news@wuft.org.
Previous Yoho Will Not Seek Re-Election To Congressional Seat
Next Gainesville Neighbors, City Enforcement Struggle To Get Man’s Cluttered Property Cleaned And Keep It That Way